As avid readers will know the London Borough of Barnet managed to get themselves into Private Eye two weeks ago because of their long term chronic failure in procuring unlicensed, in just about every way ( start with SIA and CRB and just keep going ), bully boy security guards from a phoenix of MetPro companies. You will recall that there was not a Contract, only an arrangement, and that over £1.3million was paid out for non-services received over 5 years. Procurement at Barnet Council is so good that they managed to pay about £17 p.h. to MetPro and other 100% legal providers get just £9 odd p.h. The words back and hand have, er, jumped into Mr Mustard's mind for some obscure and unrelated reason. get about 14% less. Mr Mustard made the mistake of comparing static guards to the ones who travel (amusingly often called emergency or rapid response when in fact most of the time they just drive around locking up the park gates and they can't legally break the speed limit) and Mr Mustard likes accuracy hence this amendment.
Anyone with an ounce of knowledge about the procurement of services would know roughly  how much to pay for something. All these conferences that Officers go on, don't they ask officers from other Boroughs about how much they are paying for certain items? it is a proper question as you are all in buying groups of one sort or another or could be if you did any real work. Mr Mustard suspects that owning the bar next to a conference centre targeted at local authority conferences would be very lucrative. And just think you could charge the hapless Assistant Director of Commercial Services, Captain Craig Tommy Cooper, who is on the not ungenerous salary of £132,480 p.a. & is in overall charge of procurement ( using the phrase "in charge" in its loosest possible sense ) more for a pint of beer as he won't know the proper price?

Do readers feel inspired by the example of Sir Paul Stephenson who hadn't done that much wrong and still resigned as he was in charge and felt morally obliged. Time to get the ceremonial Sandhurst sword out of the cupboard ?
MetPro should have completely failed the "sniff test" with every Officer who ever touched an invoice. In case you have not heard of it before this is the "sniff test".
Def: Sniff Test
(idiomatic) An informal reality check of an idea or proposal, using one's common sense or sense of propriety. ( i.e. appropriateness ).
Mr Mustard does not have the time available to him that Officers do. He has a real and very full life and being Mr Mustard is a part time occupation, and source of amusement, although Barnet Council really aren't funny. That training course video that relates them to a bunch of clowns seems like reality to Mr Mustard. What you haven't seen it? Well here it is.
Give yourself 5 minutes to stop laughing and put your socks back on and then read on as Mr Mustard has another sniff test failure to tell you about. It is a shocker. It leapt off the page at Mr Mustard and it should not have escaped from NLBP.

Yesterday, 99% The Barnet Eye, one of the famous five Barnet Bloggers, officially endorsed by Eric Pickles MP, circulated a report entitled State of the Borough 2011 produced by the Barnet Insight Unit. A renaming ceremony is in order, it is now the Lack of Insight Unit. Mr Mustard has already featured the Head of Insight as a non-job and now he can be dispensed with on the grounds of non-performance and not being in touch with reality.


Look at the 2 documents below. Two pages are from the New Support & Customer Services Business Case which was presented at the Cabinet Resources Committee on 29 June and the other is from the State of the Borough 2011 report as headed ( what is the point of this document ? said Mr Mustard's co-Director - Mr Mustard could not tell her and as a Tax Payer she was unimpressed ). 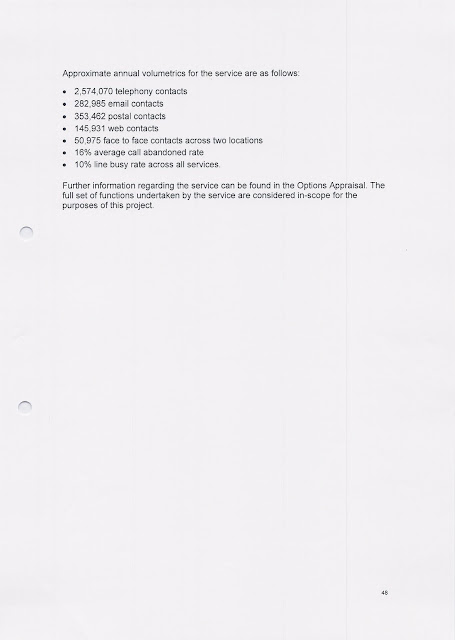 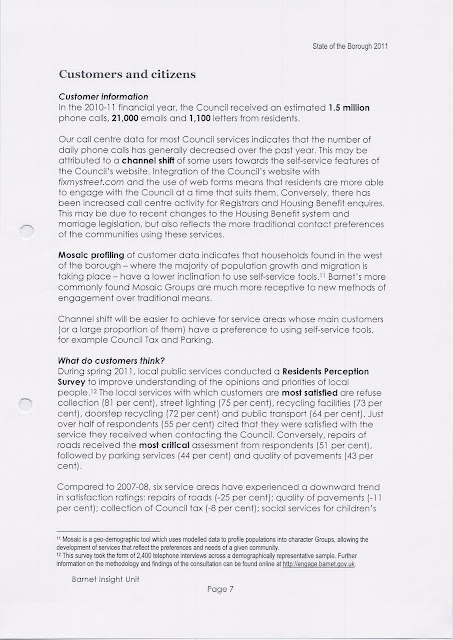 Now let us take a close look at the figures.
You can see that they are vastly different and the ones in the State of the Borough report are only a small % of the real numbers. Mr Mustard does observe that for the purposes of outsourcing the use of unrounded numbers does not help understanding, 282,985 should have been put down as 283,000 but at least he thinks that the numbers might just be about right. They do not fail the sniff test.
Anybody with half a brain would know that in the age of computing more than 21,000 emails are sent to Barnet Council each year ( 80 a day ) and more than 1,100 letters ( 4 a day ! ). Are you smarter than a 10 year old ? I don't think you are Barnet. I think Mr Markey will be round in a moment for the ceremonial sword Mr Cooper.
Better clear your diary non-stick, there is going to be a sudden attack of conscience and a queue is going to form outside your door of senior Officers who have just realised that they are not worth what they are paid and are going to do the honourable thing and resign.
Oh and Councillors, can you believe any numbers that are put in front of you like the OneBarnet % savings ? Please question everything in the future that fails the sniff test.
Mr Mustard will now sum up the state of the Borough of Barnet 2011 in one word - Broken ( © Mrs Angry )
Yours frugally
Mr Mustard
Posted by Mr Mustard at 11:26 am