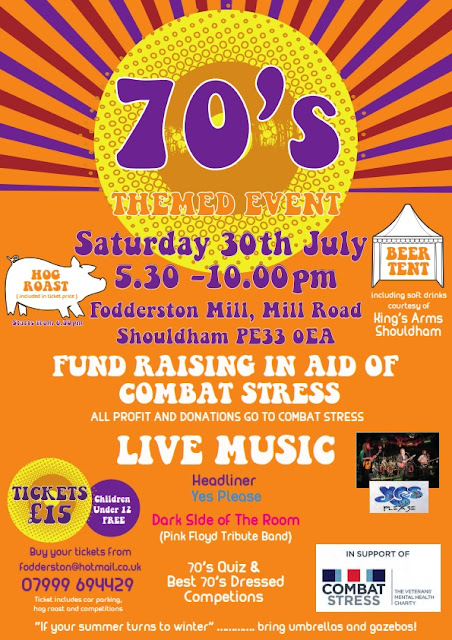 Posted by Mr Mustard at 1:51 pm No comments:

Newham in a time warp 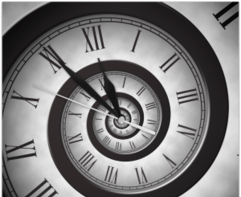 Mr Mustard's client woke up on 29 February and decided to be decisive and buy a car that day. He had a van but wanted a car. He started to research on gumtree and found 2 cars he liked. He tried to contact both vendors and went to see one car that on inspection he didn't like and then arranged to see the other one at 2pm in Ilford. He drove there in the van and hung around for half an hour whilst the seller turned up. He agreed to buy the car but didn't yet have insurance so the seller agreed to drive the car home behind him in his van. Once at home a cash payment of £500 was made, a hand written receipt was given and the car was parked on his drive ready for use once taxed and insured. This would have been at about 3pm. There is of course a trail of computer searches and texts which support the facts.

What he didn't know was that the vehicle had received a £130 PCN at 9:47 a.m. that day on Church Road in Newham, an address which he has never been to in his lifetime, for being parked in a residents bay without a permit. He duly wrote to Newham to explain that he didn't own the car at the time of the contravention and this is part of the hideous reply that he received (apologies for the poor quality).

The log book (= the V5 registration document) never shows the time of the transaction, only the date. The log book shows this

So unless the transaction took place on the stroke of midnight on 28 February, there must have been two owners that day.

He was the owner of the vehicle on the said date but not at the said time. Mr Mustard will be bringing this distinction to the attention of an independent adjudicator as the response shows a failure to properly consider the representations (the law only says they have to consider them but implicit in that is proper consideration). It is a typical way in which Mr Mustard has seen a number of local authorities write and is a deliberate attempt to put motorists off from challenging further and to nudge them to pay up. The council have not directly called the motorist a liar and said he owned the vehicle before 9.47 a.m. but one can presume their lack of belief from the poorly drafted reply.

"Therefore, the PCN remain with you." Words would fail me but they have already failed Newham Council.

Something needs to be done about out of control parking sections of local authorities. Many people would pay up having received a rejection of their representations, especially the elderly or vulnerable, and then justice will not have been done (the tardy lose out as well, this client having contacted Mr Mustard on what he thought was day 28 when he couldn't cope with the tribunal's on line system. Mr Mustard pointed out it was day 27 and popped to see him the next day and did the on line Appeal for him. It will take place in mid June). Having paid, the PCN would be dead and any complaint to the Local Government Ombudsman probably wouldn't get past the first hurdle.

Perhaps we do need a Parking Tsar after all and some method of penalising local authorities who behave like Newham have.

Mr Mustard has been trying to get the signs on two business bays, on opposite sides of the road, made the same since the spring of 2015. He has over-turned 3 PCN here.


When the council introduced a map based Traffic Management Order (TMO) it corrected obviously wrong signs but others it used as the basis for the TMO and thus the tail wagged the dog. There aren't numerous business premises at the southern end of Greenfield Gardens, especially 24 hour operations, but now we are in a situation where half the bays are legally restricted 24 hours a day. Mr Mustard lost a PCN at the tribunal yesterday (it was one of two PCN issued within a minute to two ladies who knew each other, the other PCN was cancelled at the first challenge) and the adjudicator was correct in that legally the bay applied, even though the council didn't mean it to and even though they acknowledged last year that the bay was wrongly signed but he can't apply mitigation or discretion. Such is life. Mr Mustard is still on won 100+ & lost 4 in 2016.

The adjudicator wasn't very impressed with Barnet Council though.

Yet more incompetence exhibited by Barnet Council (NSL will have sent the letter) and unfairness but legal.

If you see a business bay without times do not park in it at 22:20 (as did Mr Mustard's client) as traffic wardens will gleefully ticket you up until 23:00

Barnet Council made a parking tribunal net loss yesterday. They will get £110 from the one PCN that was upheld and have paid 7 tribunal fees of c.£30 for each PCN = £210 going out. Result: £100 and many man hours down the drain.

This is the question that NSL (who issue PCN for Barnet Council and provide processing services) sent to Capita who provide customer support activities which include fielding calls about parking permits (Mr Mustard has lost track of who actually processes permits nowadays).

So all that NSL wanted to know was whether the resident was told they had a permit which was valid on 15 December 15 or not.

Here is the response: 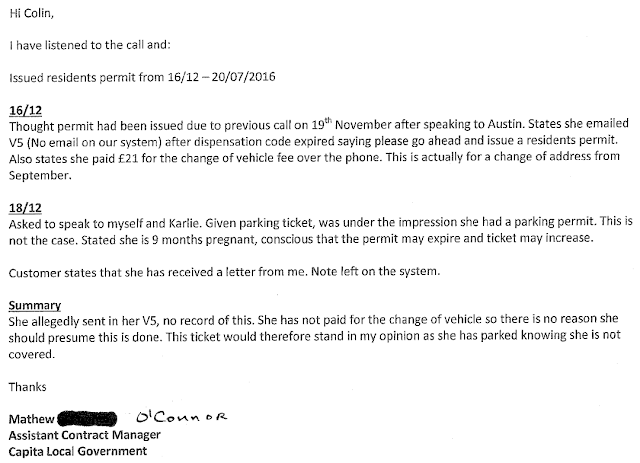 So this response doesn't set out what occurred in the conversation of 19 November which is the crux of the matter and concludes by expressing an opinion 'this ticket would therefore stand' and the decision about formal representations in response to a PCN isn't part of the job of a contractor, not even NSL who actually process PCN, so definitely not Capita's role. Any decision about representations being accepted or not must be take by a council officer (contractors can do the spadework, present facts and write decision letters under instruction, they cannot make decisions and should not therefore try to influence a decision).

If you phone up about a PCN please tape the call. If a call centre operator tells you that your challenge will fail and you should pay your PCN, please send a copy of the call to Mr Mustard and he will make the appropriate complaint. It is your statutory right to challenge any PCN you receive.

One final point is why evidence being submitted to the tribunal is being redacted (pretty pointless when Mr Mustard knows who the people are) as you can't give anonymous evidence. If the adjudicator does not pick this up Mr Mustard will be sure to mention it.

This location has already appeared in the local Barnet Times paper and Mr Mustard has been so busy fighting PCN that he hasn't had time to write many blogs. Here is a photo of the location:

This is at the southern end of Grahame Park Way and the parade is called Heath Parade, NW9. It is a known hot spot for the rapid issue of parking charges at £100 a pop (including on pepipoo).

Mr Mustard's client fell foul of this on 27 January. Here is the story in pictures.

Stop the car, open the door and start to read the sign. 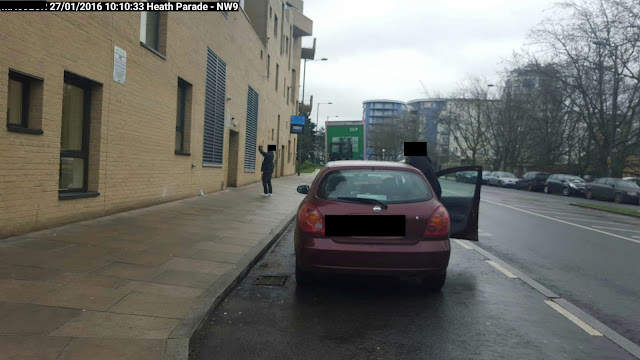 Realise after 5 seconds that you are in an area in which you cannot remain. 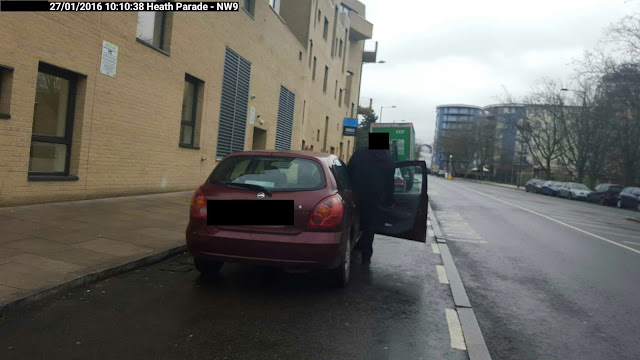 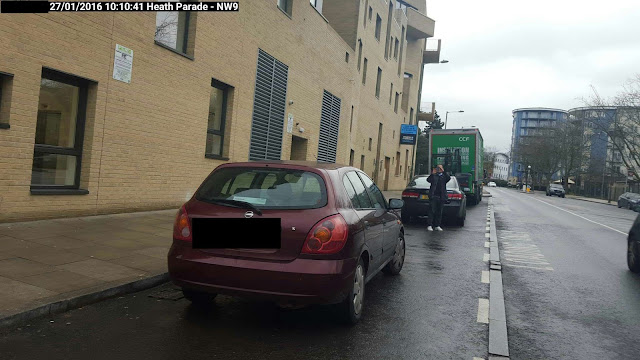 3 seconds later still, look over shoulder and decide to open window for a better view 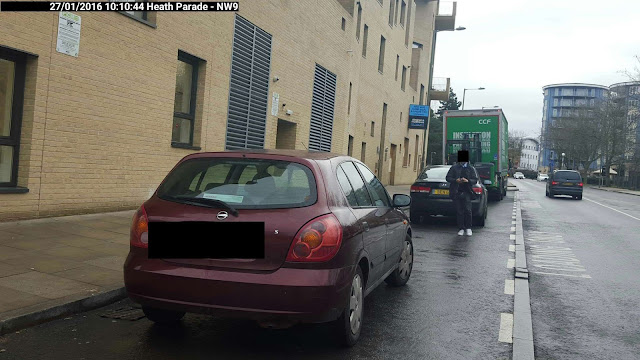 4 seconds later, release hand brake and start to move off 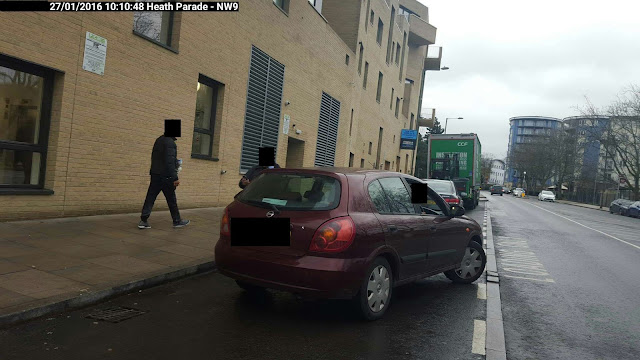 Here is the sign which is very high on the wall, contains quite small print and which, according to the Code of Practice of the IPC, motorists must be allowed sufficient time to read so they can make an informed decision as to whether to stay or go. Clearly Mr Mustard's client quickly made that choice and left after 15 seconds. 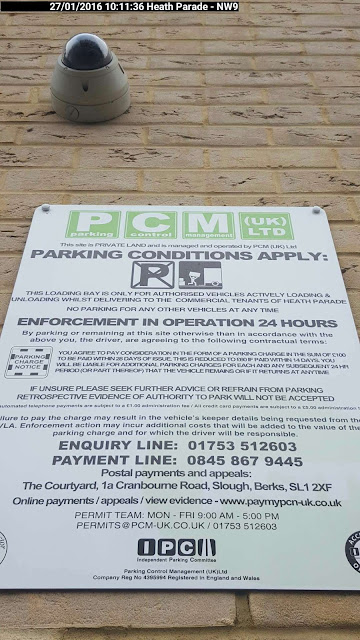 Mr Mustard plans to make a complaint to PCN and to their authorising body the IPC (from whom the Parking Prankster, the expert in this field, probably doesn't receive a Xmas card).

Mr Mustard also plans to chase up Barnet Council to get on with taking over this piece of land and the others in the same development which was part of the planning permission.

Mr Mustard has already complained to Barnet Council, as the highway authority, about the words 'loading only' which are painted on the public highway for the benefit of a private company; now that just isn't right. Enforcement by the council at this location would not be by having someone, in casual clothes, standing there all day and pouncing, like a tiger, on anyone who stops for an insignificant amount of time but by clearly identifiable uniformed traffic wardens.

Also in the Code of Practice it says that parking companies should not engage in predatory tactics. Clearly, this instance was such an event and there are many others.