In June 2018 the wording was changed which Mr Mustard didn't spot until some time later. This wording is incorrect.

Here follows the wording of just one of the cases which Mr Mustard has won at the tribunal, case reference 2190021431

The appellant was represented by Mr Dishman. The Enforcement Authority did not attend.

Mr Dishman lodged a skeleton argument dated 14 May 2019. It was submitted: i) The Notice to Owner (NTO) was materially defective as it states that a charge certificate may be issued 28 days after the date of the NTO rather than 28 days after service; ii) appellants are required to request an Appeal form as opposed to one being provided which erodes the 28 day time limit in which to appeal. The practice was said to be discriminatory pursuant to the Equality Act 2010.

The Enforcement Authority resisted the appeal.

The NTO stated: “If the Penalty Charge is not paid before the end of the 28 day period beginning with the date of this Notice, the Council may increase the charge by 50% to £165.00 and a Charge Certificate may be served seeking payment of the increased charge.”

Regulation 19 (2) of the Civil Enforcement of Parking Contraventions (England) General Regulations 2007 provides that a Notice to Owner must specify various matters including that “if, after the payment period has expired, no representations have been made under regulation 4 of the Representations and Appeals Regulations and the penalty charge has not been paid, the enforcement authority may increase the penalty charge by the applicable surcharge…”

“(1) Where a notice to owner is served on any person and the penalty charge to which it relates is not paid before the end of the relevant period, the authority serving the notice may serve on that person a statement (a “charge certificate”) to the effect that the penalty charge in question is increased by the amount of the applicable surcharge.

(2) The relevant period, in relation to a notice to owner, is the period of 28 days beginning—

(a) where no representations are made under regulation 4 of the Representations and Appeals Regulations, with the date on which the notice to owner is served…”

Regulation 3 deals with service via post. Service is deemed is deemed to have been effected on the second working day after posting (Regulation 3 (2)).

Regulation 4(4) of the Civil Enforcement of Parking Contraventions (England) Representations and Appeals Regulations 2007 provides the grounds on which representations may be made against a Notice to Owner.

"Procedural impropriety" in this context means a failure by the enforcement authority to observe any requirement imposed by the Traffic Management Act 2004 or the General Regulations or Representations and Appeals Regulations. This includes, pursuant to Regulation 4(5) (a) of the Civil Enforcement of Parking Contraventions (England) Representations and Appeals Regulations 2007 the taking of any step, whether or not involving the service of any document, otherwise than in accordance with the conditions subject to which; or at the time or during the period when, it is authorised or required to be taken.

I find the failure to accurately state the position in the NTO to be a procedural impropriety as so defined.

For these reasons I allow this appeal and have not gone on to consider ground 2.

If you have a Notice of Rejection which was received by you less than 28 days ago and your Notice to Owner also had the incorrect wording then you should make an on line Appeal to London Tribunals on the grounds of procedural impropriety and ask the adjudicator to follow the decisions in 2190021431, 2190185574, 2190155868 and 219019494A which are by four different adjudicators so starting to produce a body of identical decisions which makes it more likely than not that any other adjudicator will follow them (they are not precedents but may be persuasive).

If you have an Appeal at London Tribunals which has not yet been decided you can email them on queries@londontribunals.org.uk
and add a new ground of Appeal of procedural impropriety and quote the four decisions above. If you need copies of the decisions please email mrmustard@zoho.com
or you can search in the tribunal register for them here
https://londontribunals.org.uk/
choose Statutory Registers and then 'search' the Environment and Traffic Adjudicators register and then search by the reference numbers one at a time.

Barnet Council will pounce on the slightest error that a motorist makes and issue a PCN.

Time to turn the tables and make their blunder expensive for them.

Mr Mustard has just read another decision from Saturday 22 June, 2190177587, by a fifth adjudicator, that also finds the Notice to Owner non-compliant.
Posted by Mr Mustard at 8:57 pm No comments:

Mind how you approach Sainsbury's at Golders Green 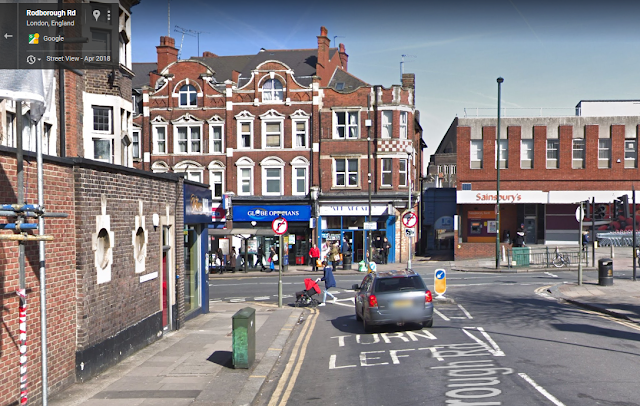 Adjudicators have been split as to whether a car that goes across the road and down the side of Sainsbury's had actually turned right or not, with only the merest turn of the wheel being necessary to get there and the no right turn signs apparently intended to stop right turns into the Finchley Road.

Well the doubt will soon exist no more as the signs are to be changed on or about 3 June to mandatory turn left signs (the 'turn left' letters on the road not having featured in any adjudication decision that Mr Mustard has read). 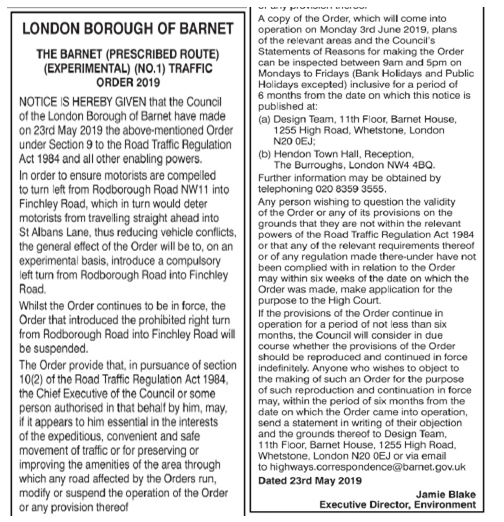 The junction is, of course, under the ever watchful gaze of a cctv camera which will automatically send you a PCN if you now fail to go left.

If you want to go to Sainsbury's best not now arrive via Rodborough Road or turn left, go around the clock tower and turn through 180 degrees, minding the camera on the yellow box outside the tube station, and then turn left into St Albans Lane or go up North End Lane and right into West Heath Drive.

If you think that there never was any conflict at St Albans Lane you are able to send an objection into the council at any time between now and 3 December, using the email address in the Notice above or by traditional mail.

Be careful out there.