Bunn Fight at the car park in Mill Hill 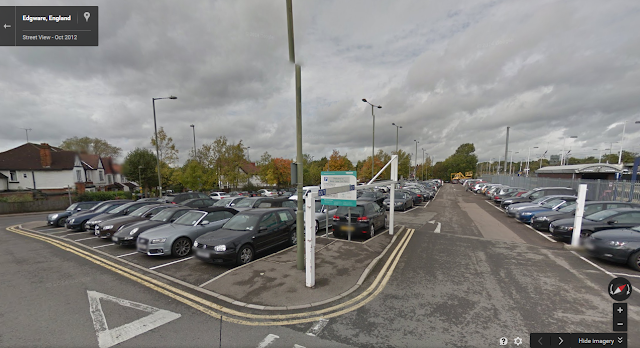 3 hours free parking was recently agreed by councillors for Saturdays (not sure it is permanent but you can look at the sign before you park).

The message didn't properly filter through to the NSL traffic wardens nor to the PayByPhone people who carried on charging £5.10 for 3 hours of free parking and/or dishing out PCN if you didn't pay. The requirement to have a telephone to order 3 hours of something free was unreasonable and Mr Mustard would have beaten the PCN he heard about at PATAS. There is now no need as management have stepped in and out things right. It is doubtless only because of outsourcing parking in the first place that it all went wrong.

Pro-active refunds are to be made.

All PCN should also be cancelled but somehow Mr Mustard thinks that won't happen so make sure you challenge the PCN or wing a copy over to mrmustard@zoho.com and he will get it cancelled for you.

Mr Mustard
Posted by Mr Mustard at 4:25 pm No comments:

You won't believe your eyes.

If you have a £130 PCN you can end up with the value being increased by 50% and you then receive a Charge Certificate.

Mr Mustard, who rather likes numbers, knows that if you add 50% to £130, the answer, using only his own brain power, is £195. Newham Council have huge computer systems which help them to make a packet out of PCN

Mr Mustard thinks you might like to see the Charge Certificate, but not if you open an envelope over your cornflakes, having innocently forgotten to pay a PCN yourself?


Can you imagine how the lady who opened the envelope to be confronted by this Charge Certificate felt? Even Mr Mustard would have been shaken to his very core. (He has virtually held the hand of the affected party and told them not to worry, which is easy for him as his name is not in the frame).

There has obviously been a diabolical error somewhere and the test now for Newham Council is what they do about this gargantuan error. The very least is a fulsome grovelling apology from the Parking Manager, the cancellation of any other PCN that happen to be knocking about for the same vehicle (only one as far as Mr Mustard is aware) a bunch of flowers (no, not for Mr Mustard, silly) and a lifetime's supply of free visitor vouchers.

Are Newham Council big enough or will they blame some faceless unnamed pen-pusher and quietly cancel this PCN and otherwise keep schtum? We are judged less by our mistakes than how we deal with them. Here is an opportunity to show the world what Newham Council are made of; sugar & spice?

Surely the PCN value field could have been set to trigger a warning if it exceeded a set maximum?

Update 18 June 15: The Newham payment system is now showing £457 which is a vast improvement on the previous figure but is still wrong. A council can only issue one Charge Certificate and so having issued a defective one they have no action open to them other than hitting the cancel button (unless they want to explain themselves to the Ombudsman in due course). 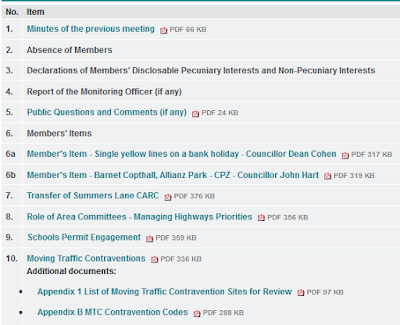 Mr Mustard had not been to a meeting for a while so he decided to show his face and speak to the committee for 3 minutes. The running order of the meeting was changed so that the items Mr Mustard was speaking on came earlier although once there Mr Mustard usually stays for the whole meeting.

Cllr Dean Cohen is proposing that single yellow lines are not enforced on Bank Holidays. There seemed to be more debate about what is a bank (or public) holiday than about the idea of enforcement but after some faffing about the proposal that will be worked on by officers is to not enforce on a day on which the public don't expect enforcement as the pay and resident bays are not enforced on those days. Mr Mustard proposed this when policy was reviewed last July. He is pleased that it is at least being considered now. Traffic wardens could, in the meantime, be instructed to concentrate on other areas and all challenges against single yellow line enforcement on bank and public holidays could be accepted whilst the necessary legal steps are taken.

Cllr John Hart, on behalf of all 3 Mill Hill ward councillors, then proposed the contraction of the area and times of the Saracens Event Day zone. He posited that it could be removed but it is part of the planning permission and other councillors would have voted him down so he stuck to reducing the area size and the hours. Officers are against reducing the 6 hours as that is their way of ensuring the restricted time covers possibly differing kick off times so essentially we are in a situation where you can be penalised for parking after a match is over which is a nonsense brought about by administrative convenience. A plan will be worked up and brought back to the committee with a smaller number of restricted roads for councillors to vote upon.

Permits for school staff was next. You might want to read the proposals here. It is unsurprising that staff who work in schools were heavily in favour of being allowed to park in a residents CPZ. Mr Mustard thinks that residents will not be so keen and the residents in affected areas are to be consulted.

This is what Mr Mustard had to say to councillors on the subject:


I am all in favour of maximising the usage of on-street car parking spaces.

However, the idea of letting school staff is one that needs to be treated with caution as even private profit making schools appear to be included. So a school employee could have a permit which would cost, I presume, the same amount as a resident's permit (with £40 being typical) but an employee of, say, a school stationery supplier, which might be in an adjacent building would have to pay £525 (this is the annual cost of a permit for a business)

I feel a judicial review coming on if you treat one group of employees more favourably than another.

Then we came to the meaty part of the meeting which will bring shedloads of money into the council's coffers mostly from yellow box junctions, is Mr Mustard's view, although the safety of schoolkids was, of course, put forward as the moral reason for having all these cameras.

Mr Mustard had his say, as follows:

I would like to say a few words on three topics, yellow box junctions, banned turns and permits for school staff.

The words "Entering and stopping in a box junction when prohibited" have cost drivers in London millions of pounds.

If you are in moving traffic and see a yellow box junction approaching you are meant to stop before the yellow markings, watch the car in front cross the junction and clear it by 5 metres or so and then set off.

That is not how London traffic actually operates in the real world.

In the real world people keep driving if it looks like the exit will be clear by the time they reach it. If that goes wrong, they risk a £130 penalty.

Other London councils, like Hammersmith & Fulham, have created some fantastic money-spinners including the notorious money box junction where Bagleys Lane meets the New King's Rd, £2.7m in a year.

The yellow box exists to try and prevent junctions from becoming blocked which is an entirely reasonable policy. What is not reasonable is for councils to issue a PCN to someone who clears the junction but still has a metre of their car over-hanging the yellow box and causes no traffic disruption.

What I would like to suggest that Barnet should have as its policy is that PCN will only be issued for yellow box contraventions where the failure to leave the box clear hinders the other traffic flow, usually the road at right angles. Also, that yellow boxes should be designed to the minimum possible sizes and I suggest councillors take a look at the one outside Sainsburys in North Finchley as being an example of one that is oversized.

Rather than issuing PCN for people turning right or left when they shouldn't, I think that the council should, as policy, engineer the roads such that banned turns become impossible to perform. After all you are trying to control traffic flow, not raise revenue. (thirdly is above)

Time will tell what happens.

Mr Mustard
Posted by Mr Mustard at 10:35 pm No comments: 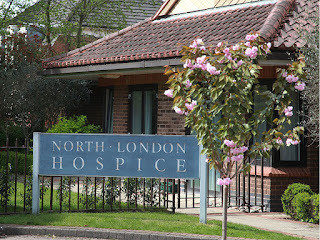 Here is a lovely email which just dropped into the Mr Mustard inbox.


I am writing to let you know that we have received further donations in your honour and in return for help with penalty charges. The overall total, and absolutely incredible amount is £1,876, which is such an amazing amount for the Hospice. I would like to thank you yet again for your continued and much valued support.

In 2014 our specialist community team were able to carry out 6,754 home visits. Our vision is that everyone in our diverse community who is affected by a potentially life limiting illness will have equal access to the services and support they need to optimise their quality of life.

It’s through your support and generosity that we are able to achieve this goal.

Thank you once again for your kindness – it is very much appreciated.


Mr Mustard supports the hospice because they looked after his late wife so well in 2005.

You don't have to receive a PCN in order to support the Hospice, you can make them a donation just because of the valuable work they do. You can donate here.

If you are cash poor but time rich, you could give your time instead.

Mr Mustard
Posted by Mr Mustard at 5:07 pm No comments: