There is a consultation here on changing the values of PCNs for parking contraventions in Barnet from £60/£110 up to £80/£130. The council say that is because they want fewer people to contravene but Mr Mustard thinks it is a simple question of revenue raising.

Sorry there isn't much time but Mr Mustard has been working flat out on his day job for 6 months and this is the first day back in his Barnet office.

Mr Mustard obtained a paper copy of the questions as he likes to see them all before he starts to answer. 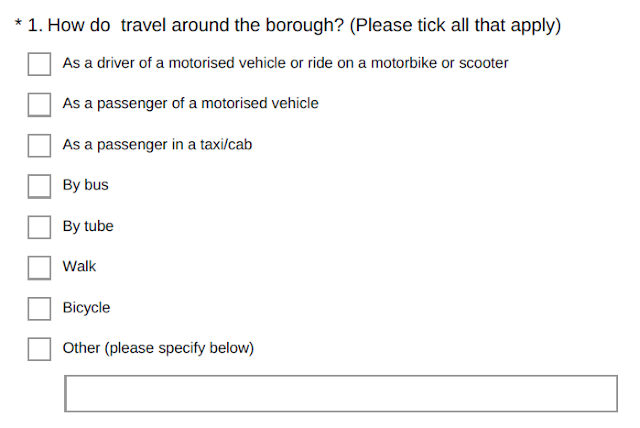 By train and in a wheelchair are omitted options. Mr Mustard's suggested answer to this is to tick all that apply, in his case all of them and write 'Train' in the other box.

A dangerous question. If you tick 'a lot' it might be assumed you get lots of PCNs so your response is discounted or if you tick 'rarely' your view is unimportant as you won't get many PCNs? Who can say. Mr Mustard decided to go for 'Often' although that seems rather like 'a lot of the time' to him. Rather vague measures. The number of journeys per week would have been a better idea.

An easy one this. Just tell the truth. A comparison will be made between those who will be affected and those who won't.

Mr Mustard would tick all that apply, he doesn't commute or do a school run.

Easy, you 'strongly disagree'. Who in their right mind would vote to be penalised more severely?

You disagree because £110 already takes someone on the minimum wage £8.21 an hour, more than a day to earn. Even the £60 PCN is most of a day's pay (7.3 hours). You disagree because PCNs don't work, Camden have always been at the higher Band A rate and they issue 50,000 more PCNs each year than in Barnet. You also disagree because the vast majority of people aren't trying to get a PCN, they have usually made an innocent error, misunderstood a sign or found themselves having paid to park the wrong car etc.

You also disagree because Barnet Council don't do anything to help you understand the complex parking system and as you suspect they are just trying to raise more revenue which takes the pressure off the general fund.

Yes. Sign every single yellow line inside a CPZ so that motorists are told on the spot of the times as to when they can park rather than having to spot zone entry signs as they drive along. Make all signs simpler, get rid of complex multi-use bays if possible. Have traffic wardens observe on single and double yellows and in bays for 5 minutes before issuing a PCN rather than instantly issuing as is mostly the case now.

Give talks to drivers about lines and signs to help them avoid falling into error.

Conduct research as to why PCNs are issued. Did the driver 'take a chance' or make an innocent or unknowing error. Conduct research into the most frequently committed contraventions and devise ways of making them less likely to happen and inform the public of them. 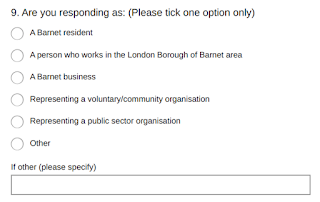 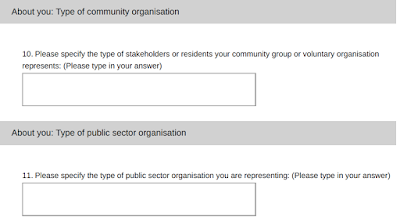 Your opinion carries more weight if you are answering on behalf of a group.

Mr Mustard skipped all questions after this one, about his personal characteristics.

Mr Mustard looked at the statistics for Barnet.  It is simplistic to consider that the level of the penalty and the number of PCNs being issued bear much relation to each other. The main factor is the number of traffic wardens on duty and the number of school keep clear sites under cctv. Barnet introduced cctv in May 16 and this caused a huge surge in the number of PCNs issued for stopping on the markings. Population growth in Barnet has been constant these last few years and that means more vehicles on the roads and thus more competition for parking spaces and more PCNs. The increasing use of external contractors for enforcement will be a factor in the number of PCNs issued. Budget pressures, not that any council will admit this, are a pressure on the parking department to keep ticket issuing high.

Let us look at other boroughs which are mentioned, as having success in reducing PCN numbers by increasing the cost of a PCN. There may be a short term effect but it won't last and besides, visitors to a borough don't choose it because it has Band B PCNs rather than Band A.

So here is Waltham Forest which has been all band A since April 13. 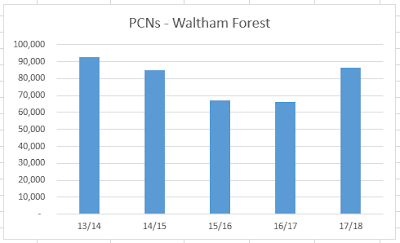 We can see that numbers did drop but we are now nearly back where we started. The main result is that the council will be raking in loads more money, say 86,000 PCNs at an extra £10 each = £860,000 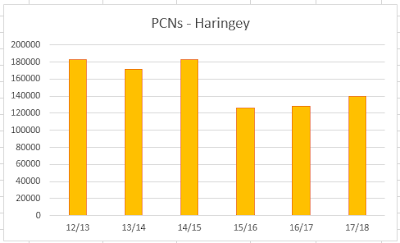 This is really interesting. The PCN value increase was in October 13. The numbers of PCNs in 2013/14 was down on the previous year but then in 2014/15 it went up before falling markedly in 2015/16 since which it has risen in the following two years (2018/19 figures are not yet published by London Councils) and we will soon be back where we started. Haringey are probably gathering in another £1,400,000 each year.

Let's look at Camden which has always been Band A as they are a central London borough. 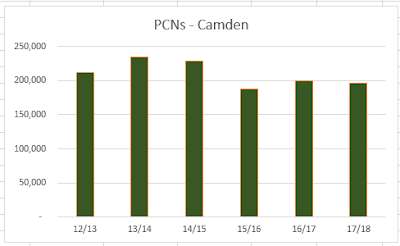 Despite being at the higher rate all along the number of PCNs has not dropped but remained more or less the same for the last 6 years. What this tells us is that higher level penalties don't stop contraventions from occurring. PCNs are a blunt instrument which do not work except in their unofficial guise of revenue raising. Camden take in c. £2,000,000 more each year because of the PCNs each being £20 higher than for band B (the majority will be paid at the 50% rate but also some at 150% so that's an extra £30, kerching). 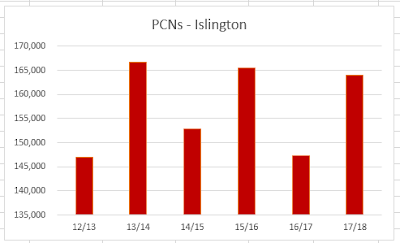 That is some rollercoaster ride in Islington. Mr Mustard doesn't know what the data proves, he does know it doesn't prove that higher PCN values = lower numbers of PCNs. There are other factors at play in Islington.

Please have your say and ask barnet not to put up PCN values but to become a pioneering borough that tries to genuinely reduce the numbers. Less of the stick, more education is needed. save the stick for those who don't want or refuse to learn.

Residents - Don't be gagged by your council 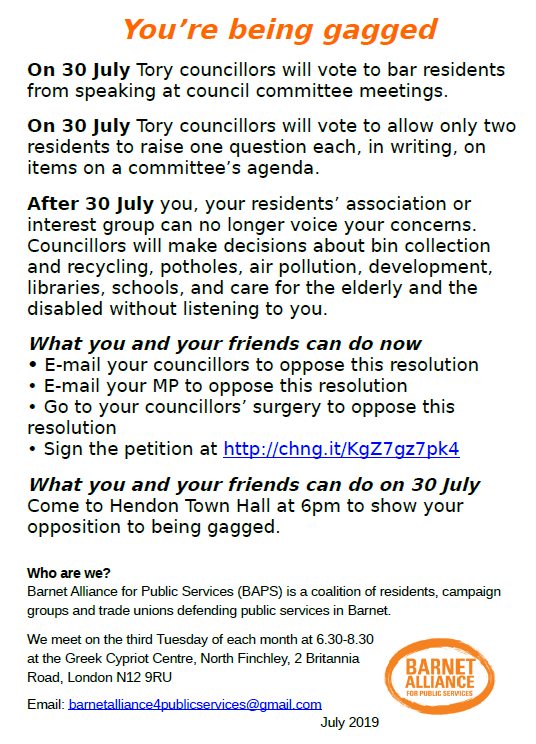 Link to the petition here
Posted by Mr Mustard at 6:54 pm No comments:

Mr Mustard was consulted by a lady who enters the congestion charge once a week at the end of the day and is well aware of the times.

She was sent a PCN timed at 17:59 which Mr Mustard thought was a little harsh as the zone ends, allowing free entry, at 18:00. Mr Mustard also remembered the below Barnet decision: 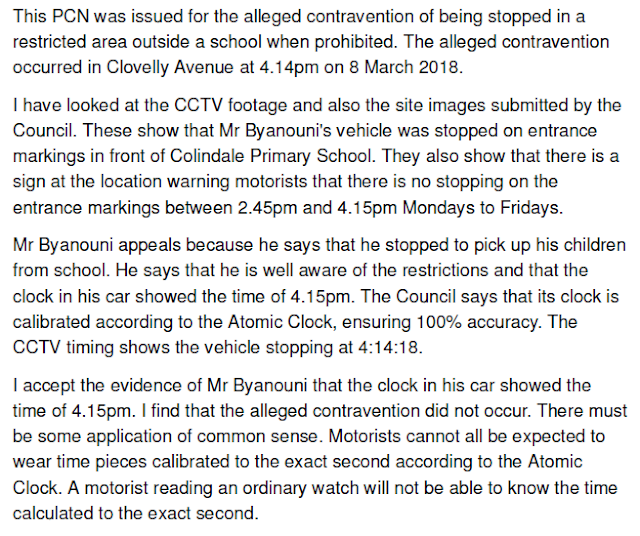 He asked the lady to find the exact time at which she entered and started an Appeal regardless as paying even the 50% (£80) was not palatable for less than 60 seconds of alleged early entry. Having made a Subject Access Request of TfL this was the gobbledegook response received.

Mr Mustard thought that the answer was not the whole truth so he changed tack. A copy of the cctv was requested by the vehicle owner (it is awaited, doubtless it will now be said to have been destroyed which will lead to more enquiries) and he made a Freedom of Information request for the earliest and latest times in recent years.

What we see from the table is that sometime between April 18 and March 19 the leeway provided at the end of the day was reduced from the 2 minutes which was in Mr Musatrd's memory to 1 minute and then sometime during April 19 to zero minutes.

Which faceless functionary made that policy decision? Whoever is was, they have been given too much power.

What we also see is that the TfL answer to the lady who enquired for the exact time to the second was a bare faced lie as they were able to produce bags more information for Mr Mustard if he wanted it, but he already had all he needed.

If you get a congestion charge PCN later than 17:58 I would fight it on the grounds that your car was showing 18:00 and/or that the pips had gone on the car radio. The cameras may be synchronised to the atomic clock at the start of the day but could be out of sync by the end of the day.

The grounds of Appeal prepared by Mr Mustard were these, which you are free to copy for your own case 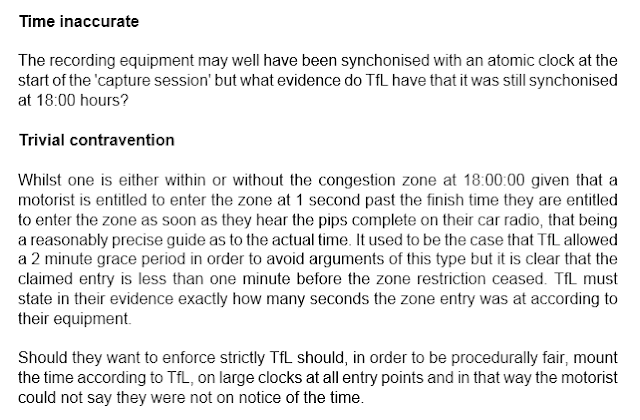 As soon as TfL saw the grounds of Appeal, they threw in the towel and cancelled the PCN. Their pursuit of a £160 penalty in this situation was a gross abuse of power.

Mr Mustard
Posted by Mr Mustard at 2:51 pm No comments: