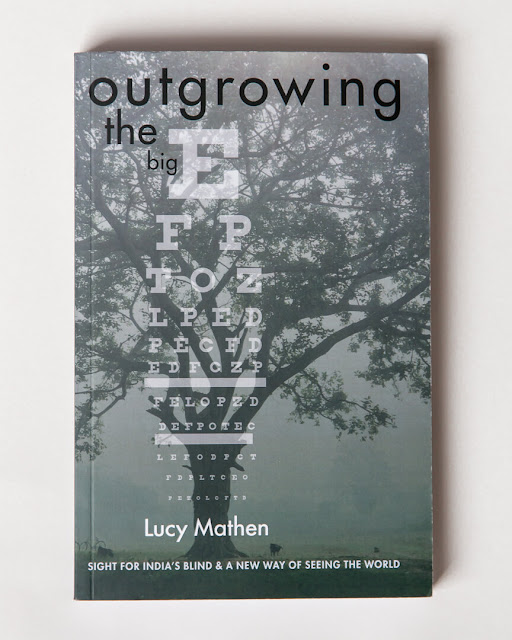 Credit or debit card or cheque book (yes, some of us still have one) at the ready please.

Mr Mustard has blogged about the charity Second Sight on a previous occasion.

The plan for the charity in 2020 is to sell 5,000 copies of the above book Outgrowing the Big which will fund 5,000 operations. This is the last year of active fund raising as the hospitals are moving onto self-sufficient and sustainable models.

£20 is the cost of restoring sight to one blind person in Bihar and to help you spatially, as he couldn't have put a pin anywhere near the correct location without a bit of help years ago from a friend who visited the hospital to help out, Mr Mustard has given you a useful map. 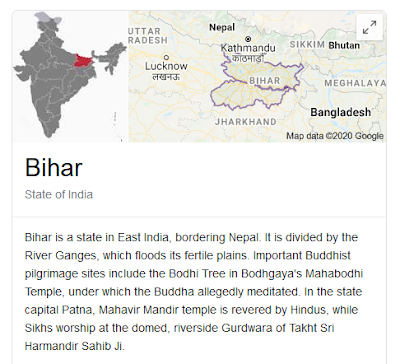 Mr Mustard would like you to buy a copy of this book. You will enable a blind person to see again and if you can spare £20 what better way would there be to spend it. This isn't a book to buy and just leave on your coffee table, it is also a good and varied read, here is one page to whet your appetite: 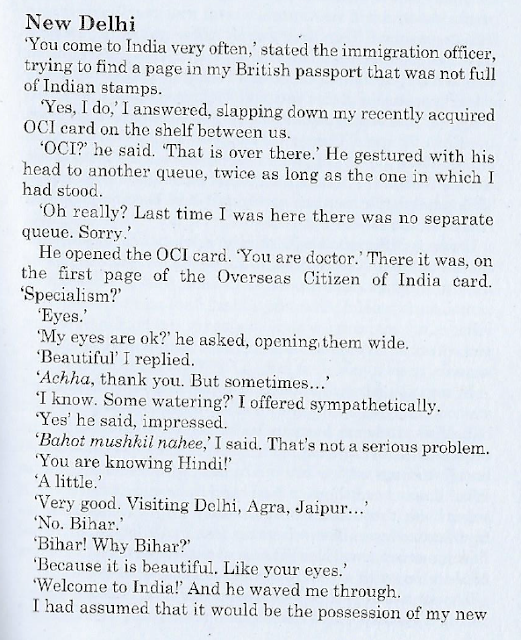 Mr Mustard is lucky enough to have 2432 twitter followers, who will be tweeted a link to this blog. If just 1% of you buy this book on this link then 24 people will be able to see clearly again. If you are cash rich but time poor, you might just want to donate instead, Lucy, the driving force behind Second Sight, will be happy and grateful for either.

Do please buy the book or give something. 100% of your donation goes on saving sight, nothing at all on administrative costs.

https://www.secondsight.org.uk/
Posted by Mr Mustard at 3:33 pm No comments:

Barnet Council not good at thinking of risks - Saracens

Here is the risk register that was cobbled together by Barnet Council to offer some crumbs of comfort for the stupid 30 year loan of £22.9m to Saracens. 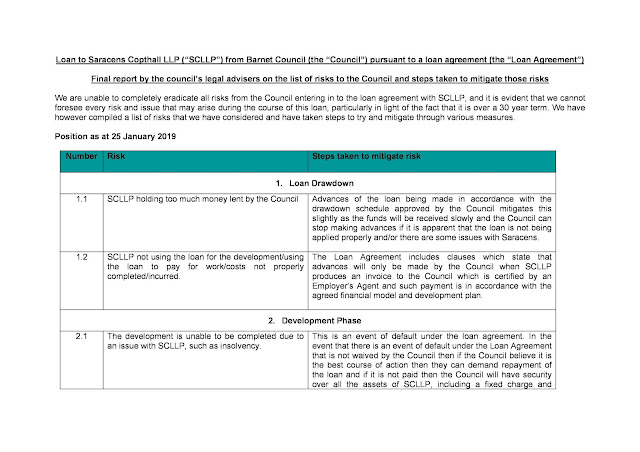 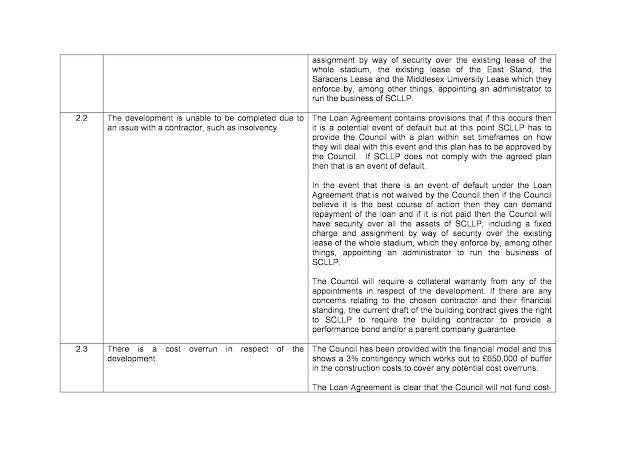 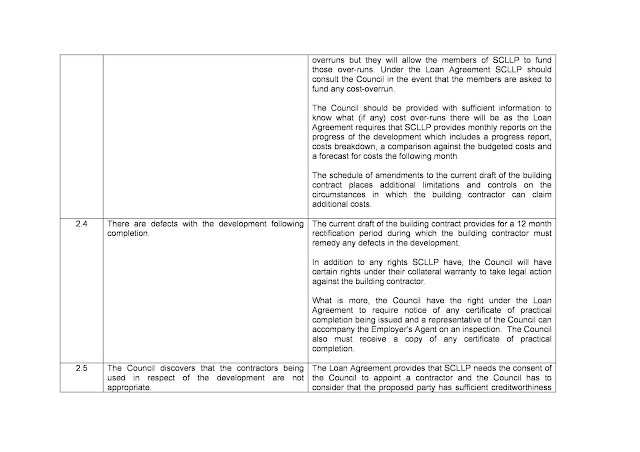 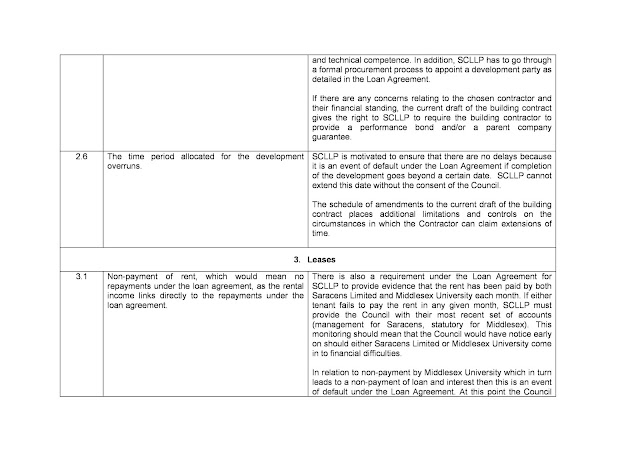 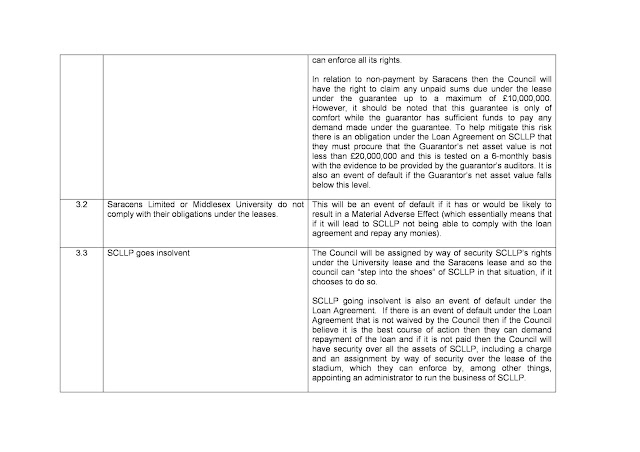 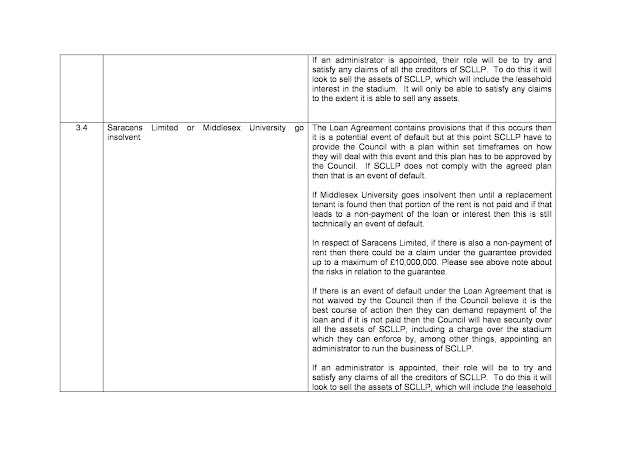 It seems that no council employee (or 'Officer' as they are so grandly titled) considered the possibility of relegation and the effect on the club's finances or even on crowd size such that the enlarged stand may not be needed. This risk affects the ability to repay.

Mr Mustard isn't being wise after the event. He never thought it was a good idea to lend to Saracens especially when a multi-millionaire was their backer and could easily afford a new stand.

The Council did obtain a report from external accountants about making this loan. The external accountants should have obtained fully detailed Annual Accounts from Saracens and management accounts for recent months and given the rumours about the salary cap breach they should have gone though them with a fine tooth comb. They probably weren't being pushed to be overly diligent, it was just a box ticking exercise, a fop for the public, that, or the breaches were hidden out of sight, which makes Saracens not a fit and proper company to be offered credit.

There must be an awful lot of back covering going on in the Barnet Council offices at Colindale at the moment. There is a meeting on Wednesday of the Financial Performance and Contracts Committee but that isn't going to decide anything, it is merely going to 'note' the report that the Deputy Chief Executive, Cath Shaw (by coincidence she is a bit of a rugby fan) is presenting.

The council are still bending over backwards for Saracens, despite the well publicised failings with the salary cap. The two fines, points deductions and agreed relegation are all very good reasons to cancel the loan and demand repayment of the sums advanced so far. There are no extra assets from which the £3.2m could be recovered and Saracens are several million down in fines, further eroding the available assets.

The council know they can walk away: 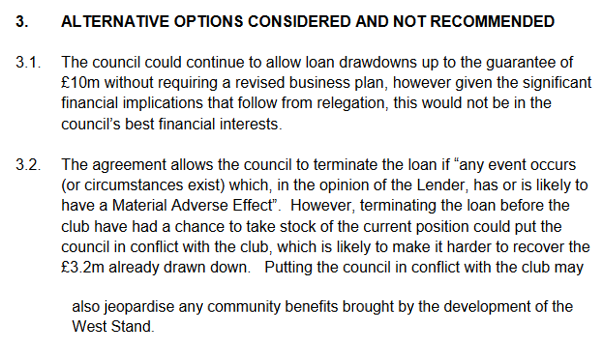 The council admit and recognise there are 'significant financial implications' but still want to leave the door open for further lending. A bonkers stupid decision.

There will be a definition in the contract, which Mr Mustard has not yet seen, but which a member of the public has asked for via the What Do They Know website, of the term 'Material Adverse Effect' but one would hope that the council's lawyers have written it to cover such a financial morass as the one which Saracens have got themselves into by their own reckless actions. Councillors on this committee should be given the definition and should really of their own volition ask to see a copy of the contract which they are absolutely entitled to see. Decisions should not be taken on a contract without seeing a copy of the contract so you know what you are deciding on.

If the council don't hold the view that the current state of events is a materially adverse one then that would be wilful blindness.

The sum in question is petty cash to the multi-millionaire behind the club. Just ask him nicely for our money back and let's put it to better use.

Mr Mustard
Posted by Mr Mustard at 10:06 am No comments: 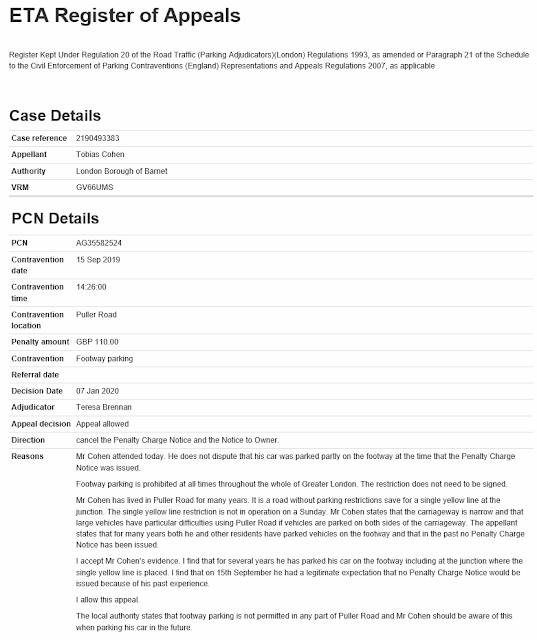 When Mr Mustard read the above tribunal decision he thought it was odd as he knew that unless cars on both sides put a wheel on the kerb it isn't possible for lorries, ambulances, fire engines etc to get through.

When the google car went down the road for the first time in 2009 cars were clearly parked partially on the pavement and nothing has changed since. 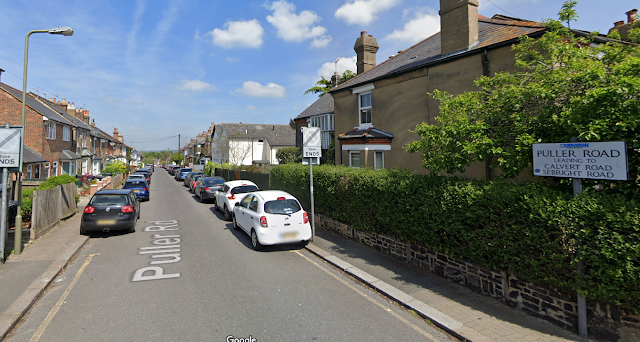 Mr Mustard also thought that it was a road in which the London wide pavement parking ban is not enforced. He decided therefore to extract from the published PCN database the PCNs which were issued in Puller Road in 2019. Here they are:

The council statement to the tribunal, that footway parking isn't permitted (in that PCNs are issued) which should be the truth, clearly isn't. There really does need to be sort of sanction against local authorities which tell patent lies to the tribunal.

You might also wonder why the traffic warden issued a PCN for parking on the pavement to just one car in the road when he could have issued 50. I think it is because they know if they do that one neighbour will come out, will call another one and before you know it the residents will be up in arms and the traffic warden will receive robust verbal feedback. So what Mr Mustard thinks they do is hit one car and then scarper.

Do make sure that you don't put a wheel on the kerb, anywhere in Greater London, unless a bay is marked out or you are 100% sure it is a road in which the council turns a blind eye.

Mr Mustard
Posted by Mr Mustard at 12:09 pm No comments: