"Learn from their success and mistakes"

Well how interesting. The heading was taken from the Capita conference brochure ( below ) which you can download in full here. So it is success in the singular and mistakes in the plural
Here is the brochure for your delectation and delight. 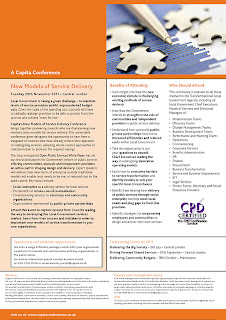 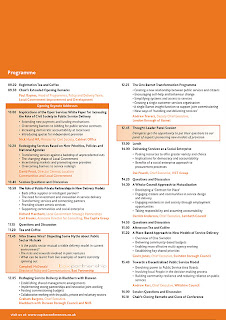 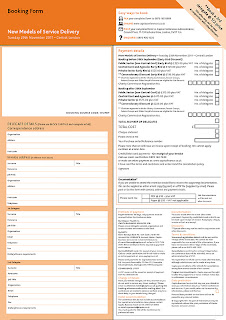 So there you will see one Andrew Travers, the £1,000 a day Chief Financial Officer, speaking at a Capita conference ( Mr Mustard wonders if Capita are paying him for today or if Barnet Council tax payers are? ) So will he be speaking about success or failures? Make you own mind up, although the following might help you.
As luck would have it, the corporate performance results of Barnet Council for the 3 months ended 30 September 2011 are out today. You can get them, and lots of other stuff, on the Barnet Council website here or in the box below.
Corporate Performance results Q2 2011-12 Barnet Council


You don't have to go far ( summary on page 4, detail on pages 16/17 ) to see the results for the two targets set for the Deputy Chief Executive and they are both red i.e. as bad as it is possible for them to be. In fact his directorate is the worst performing of all of them with all of his targets in the worst performing category. None were pretty and Corporate Governance weren't far behind in the poor performance stakes. Notice also the DoT ( direction of travel ). Things are getting worse.
Who would want such a low performer to speak at their conference, oh Crapita do, absolutely nothing to do with them bidding for huge contracts at Barnet Council and hoping to curry a bit of favour ( see Mrs Angry's blog on this subject, she was on the bed ball this morning ).
Wouldn't your time have been better spent in improving the performance of what you are paid a vast amount to mismanage ? rather than gallivanting off to the Lancaster Hotel ? Enjoy your lunch.
If amongst Mr Mustard's readers today there are any delegates to this conference would you please send him a copy of the Travers handout. Much obliged.
Yours frugally
Mr Mustard
Posted by Mr Mustard at 1:05 pm 4 comments:

Over on the Famous Five Barnet Bloggers website is the complete Code of Recommended Practice for Local Authorities on Data Transparency.
Barnet's councillors like to waffle on about how open and transparent they are.
It's time for an armchair audit

to see if they are 100% speaking the truth or if it is just spin. Here is the minimum that the Communities & Local Government Department recommends ( Uncle Eric in effect says "do at least this" ). Comment in red by Mr Mustard

12. As a minimum, the public data that should be released are:

Mr Mustard
Posted by Mr Mustard at 8:00 am No comments:

Not even a cuddly toy! for the Children's Service

The most popular gift in the Children's Service is chocolates.
Here is the full list for the year ended 31 March 2011 of all gifts & hospitality.
The Japanese notebook and the photo album probably didn't need to be declared, assuming they were of modest value, as stationery items can be ignored.
One would think that the value of an Amazon gift voucher would be known?
As always there is an entry whose acronym isn't clear "FC", not Barnet FC? presumably the children's department Xmas party. The entries in the register should be clear ( open and transparent ).
So there was only one dinner. Someone who wasn't senior enjoyed it (hopefully). The entry probably should have said where the dinner was consumed. One of Mr Mustard's clients always jokes about going to KFC but of course we don't.

solicitors
Zarak Recruitment   £82,000
The council believes in whistle-blowing and certainly someone was happy to tell the Information Commissioner that Mr Mustard was a naughty boy ( which he wasn't and isn't ) so do feel free to tell this blog or any of the others about things that are wrong. No-one will breach your confidence.
Yours frugally
Mr Mustard
Posted by Mr Mustard at 8:00 am No comments:

No parking pants ( parking is pants in Barnet )

This picture made Mr Mustard laugh

"I don't think my pussy would approve" - Mrs Slocombe

"Are you being served?" - people trying to park in Barnet certainly aren't.

Just in case you were wondering what Mr Mustard wears to council meetings, it is these boxers.

Email ThisBlogThis!Share to TwitterShare to FacebookShare to Pinterest
Labels: pants

Who ate all the pies? ( but isn't overweight ).

So here is the list of the gifts and hospitality ( perks ) enjoyed by the Chief Executive's Office and Chief Executive's Service ( a distinction made by the council not by Mr Mustard ) all of which were consumed or received by one Nick Walkley. The FT Diary was given to the mayor's charity.
So next time you see non-stick wearing a tie, stare at it very hard and try to work out if it is from Finland and only worth £4.50  The Finns evidently weren't that impressed if their gift was only worth £4.50 - it was probably better to give nothing at all.
Get you own better tie here for $35
Only 10 dinners in the entire 12 months. A certain Cabinet Member is 5 times more productive than that?
What sort of jobsworth world are we in when the Chief Exec feels that he needs to list that a councillor bought him a cup of coffee during a ward visit? Hardly likely to sway someone's judgment, now is it.
Mr Mustard has eaten at Savoro ( not Savoro's ) in High Barnet. Last time he went of an evening the place was very busy and the food really is very good for the price charged. The lunch menu is an absolute bargain but Mr Mustard can't stop for lunch - too many blogs to write.
So who didn't get any perks, if the list is to be believed?
Zina Etheridge
Assistant Chief Executive


Yours frugally
Mr Mustard
Posted by Mr Mustard at 11:30 am 2 comments: