The London Borough of Wallet Foragers

Mr Mustard's wandering eye sometimes leaves Barnet when he is reading the register of the independent adjudicators who consider PCNs about parking, bus lanes etc. If he sees multiple cancelled PCNs for one person, he will take a quick look at the decision. The case of Kayley Clarke was one such case. Here is the reasoning for three cancelled PCNs. 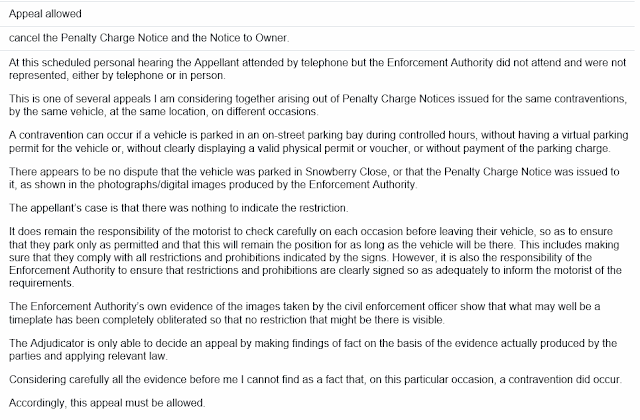 Mr Mustard noticed the remark about the sign so he went to google street view to see if, by chance, the camera car had been down there recently, the PCNs having been issued on 16, 17 & 18 March 21. Mr Mustard was in luck, the google image was from December 2020 and the single sign for the 4 car length bay was like this: 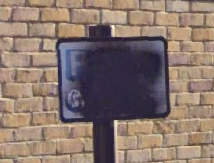 Now you are completely gob-smacked. A PCN has to contain the following
'the grounds on which a civil enforcement officer serving the notice believes that a penalty charge is payable'
(emphasis added by Mr Mustard)
There is absolutely no basis for such a belief when there is only one sign from which absolutely nothing can be gleaned.
That was objectionable, unreasonable, predatory behaviour by the traffic warden who probably also ticketed three other cars if the bay was full, as it usually is looking back in time on google.
Worse still, given the location in question, Snowberry Close E15 is a cul de sac not on the way to anywhere, the CEO may have deliberately come back to target this bay and issued all three PCNs when the car probably hadn't moved and that would only have given rise to one contravention.
The back office must have received at least one representation (possibly two, informal and formal) the one against the Notice to Owner and someone, who must have x-ray vision, rejected the representation and Mr Mustard would love to read whatever cooked up excuse they dribbled out to refuse a cancellation. They doubtless offered the discount again so the innocent Kayley could pay a mere £195 for doing nothing wrong. Instead they had to risk £390 at the tribunal. Mr Mustard hopes they think to ask for costs for wholly unreasonable, if not vexatious, behaviour on the part of Waltham Forest council.
If you know Kayley Clarke do please ask her to email mrmustard@zoho.com as Mr Mustard would love to see the correspondence.
The council seem to have forgotten their duty, so they are even further in the wrong, hard though that is in this case.

Given that the sign was defaced for at least three months the council are failing motorists.
Many people think that traffic wardens have targets (which they don't but don't go back to the depot after an 8 hour shift not having issued a single PCN if you want to keep your job) but you do have to wonder what the imperative is to issue needless wrongful PCNs. There can only be one answer.
It's all about the money.
Yours frugally
Mr Mustard
Posted by Mr Mustard at 10:20 am 1 comment:

Mr B had the misfortune to have his car broken into and his blue badge taken. His car is over 20 years old so after having spoken to his insurers he decided to pay for his own repairs as it was, taking into account future premiums, the most economical solution. He reported this to the police who issued a crime reference number but said they don't send a written confirmation.
The day after the theft, Mr B received a PCN outside his home because he didn't (couldn't in fact) display a blue badge and the arrangements for such an instance aren't helpful as they involve a long wait for a replacement. Mr B ended up paying for a residents permit for 3 months. Mr Mustard has to make enquiries of Brent to see what policy and procedure they have for this kind of case, sadly all too common, which complies with their duty under the Equality Act. They seem only to have punishments and not much help.
Mr B (acting by a family member) made a challenge over the internet, which is beyond Mr B's capabilities, but got rejected, twice, and the miserable letter from Brent Council contains the following.

The challenges made prior to that letter included the following statements:
I did not claim the glass replacement via the insurance as I was advised that this would significantly increase my insurance premium
and
The Crime was reported and I was given a Crime reference number CAD****, I contacted the police and was informed no documents are provided, just a CAD should suffice.
What did the car look like when the CEO photographed it, the day after the theft? Like this: 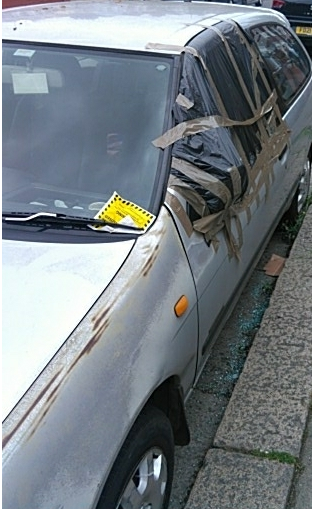 Why do Brent Council need any paperwork at all, they have collected evidence of the car windows being smashed in for themselves?

Why also do they ask for proof in the way of documents that they have already been told are not available?

Why are they so unhelpful to a disabled person?

Why do they not make due adjustment under the Equality Act?

Why do they fail to serve the public? Could it be that they want to help themselves to money out of the wallet of a poor, disabled pensioner?

Malfeasance in Merton (London Borough of) 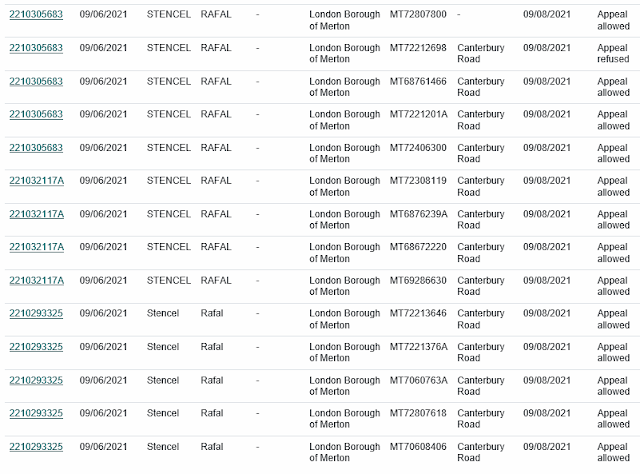 Mr Mustard likes to start his morning with a cup of tea and a perusal of the register of the Environment and Traffic Adjudicators. His main focus is on Barnet cases but Mr Mustard's eye can be caught by other boroughs and this was one such example, or rather, 14 such examples. Here is the text of the adjudicator's reasoning and decision. 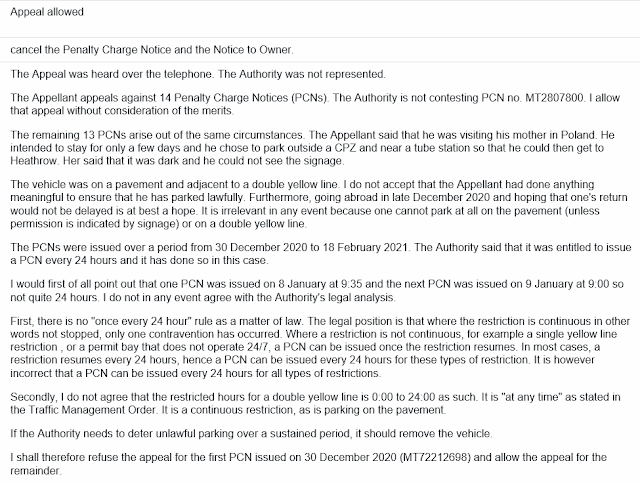 Yet another enforcement authority pushing the long discredited theory that they can issue a PCN once every 24 hours where there is a continuous prohibition on parking and in this case there were two of them (not the best parking but that doesn't mean you should be scalped for 14 times £110 = £1,540). This authority tried, reading between the lines, to argue that each new day heralded a new prohibition thanks to the wording of 0.00 to 24:00 hours in the Traffic Management Order ('TMO'). Whilst the adjudicator calmly contradicted that proposition by pointing out the black letter law of the TMO said 'at any time' it shows you what slippery snakes are employed in the parking department of Merton Council, just as in other boroughs about whom Mr Mustard has written on the subject of continuous contraventions.

It is curious that enforcement authorities don't take the opportunity to increase their knowledge by doing as Mr Mustard and other self taught PCN experts so, which is to read the decisions of adjudicators who are experiences lawyers and the final arbiter (unless you fancy an expensive judicial review) of the law in this arena viper's nest.

Take what an enforcement authority says to their own benefit with a pinch of salt and do your own research on the internet or put your case on PePiPoo (silly name but an excellent site) and get good free advice from a selection of lay people who live and breathe PCNs.

The Truth, not the whole truth & nothing but the truth

Mr Mustard was approached by a motorist (let us call him Mr R) who had paid £2.56 at the parking meter but didn't receive a receipt to put in their dashboard. They phoned the number on the meter which is there to report such problems but it wasn't answered by a person, it merely offered Mr R the option to PayByPhone but he had already paid (the transaction showing on his bank account online) so he wasn't going to do it again.

Once Mr R returned to his car it was adorned with a PCN for not paying to park. He challenged the PCN on line on the grounds that he had paid to park and provided the relevant part of his bank statement. His informal challenge (the name given to the first objection to an on street PCN) was rejected and contained the following statement, which Mr Mustard found to be rather curious:

Mr Mustard took a look at the machine. It is a Flowbird machine. Mr Mustard did some research into the company and found they have a marvellous all singing all dancing piece of back office software called Cale Web Office, or CWO, that tells you all you need to know. Here is a little flavour of the functionality. 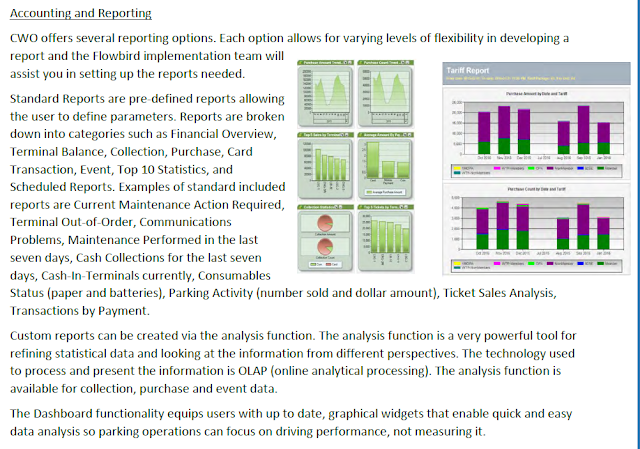 Mr Mustard emailed one of the parking managers and queried whether the highlighted paragraph was, in effect, the whole truth and the answer, after a bit of nudging, was that it wasn't and that
The matter you have highlighted regarding the comment in the letter of refusal 09/07/2021, has been raised with the officers supervisor as you aware that certain information is retained by the council for payment and audit purposes. They may mean that the actual P&D machine does not retain information (which would be correct), but would like to establish exactly what they were referring too and ensure that this officer is assessed for any additional training requirements that may be required.
which tells Mr Mustard, between the lines, that the manager wasn't really happy either. As it happens the PCN isn't being cancelled as the other wrong, which the motorist didn't tell Mr Mustard at the start, was that he over-stayed the time he had paid for on the rather weak grounds that he didn't know when the time expired. He had the time he phoned up about the meter and knew that he had paid for one hour so Mr Mustard isn't happy with his client either. As it happens the PCN isn't for over-staying and the manager & Mr Mustard don't agree if the alleged contravention stated on the PCN is applicable or not. An adjudicator will end up deciding this one. Mr Mustard doesn't think the adjudicator will warm to the council based upon what they have written.
Mr Mustard didn't query this paragraph but it is equally dubious.

On what day are the machines at the location in good working order, the day of writing or the day of the problem. Why is the writer referring to machines when the only matter of importance is the one at which payment was made. Has the writer produced the fault log? No, of course not. These machines can probably tell the council if a receipt was actually printed or not, it warns them when the paper roll will run out soon.
According to the council Mr R must stand at the machine until a 'ticket' (receipt) is dispensed. That would now be 37 days, doesn't seem like very sound advice. Wait a minute which would seem like an eternity and then phone the help line which the council didn't bother to answer is what happened, that is reasonable behaviour. If referring to guidelines the council should produce them.
Well this is outsourcing for you, management, who are not criticised as they always reply civilly to Mr Mustard, are completely in the dark about what gets written in their name some 550 miles away in another country. Not likely to be able to drop in and do a spot check of back office processing without a 3 day trip.
Mr Mustard did think about popping in, with permission, to see the folk who write so often to him when he was cycling from Land's End to John O'Groats but it was a tough day, 60 miles in the rain that day & it is really steep climbing out of Dingwall. Mr Mustard was fortified by a new comestible for lunch in Deas tearoom in Dingwall, a macaroni pie which is macaroni cheese in a hot water crust pastry, perfect for that day's cycling and it got him up the huge hill without pushing.
Yours frugally
Mr Mustard
Posted by Mr Mustard at 7:30 am No comments: