Election costs and Value for money?

It is the norm in London that the Chief Executive of the borough is the Returning Officer (i.e. responsible for the smooth running of the voting process) for that borough. That gives them easy access to a pool of staff who can act as polling station clerks etc plus school and other council connected premises to use as polling stations.

The work of returning officers is overseen by the Electoral Commission. Their website tells Mr Mustard that one of their jobs is to give guidance and support to Returning Officers, so they can run the election well, which Mr Mustard hopes includes some oversight and audit of spending to ensure that value for money is being obtained. After all, the sums involved are not trivial. The total cost of the 2018 elections in Barnet were £666,312 (including vat where applicable). A heck of a lot of money.

Mr Mustard decided to have a look at one of the major costs, the hire of the premises used for the count. He obtained information from 4 boroughs and here it is.

On the face of it, the premises chosen for the count look to be poor value. Even if vat was excluded from the Croydon cost it would only rise to £28,890 so there is a potential saving to be had of at least £11,700 which any decent returning officer would seek to save. All returning officers should take note of the much more reasonable sum that the returning officer of Enfield paid and look to follow suit. Mr Mustard will be asking the returning officer, John Hooton, to justify his choice.

Have you got a large hall that might be suitable for use as the election council venue. If so, email john.hooton@barnet.gov.uk and ask him to consider your venue for the next election count, coming up in May 2021.

n.b. Each elector could cast 3 votes which explains why votes cast sometimes exceeds the number of people eligible to vote.
Posted by Mr Mustard at 11:22 am 2 comments:

Southwark sent me this response to the FOI sent to most councils in London a month ago but I didn't have the time to write it up whilst pedalling. 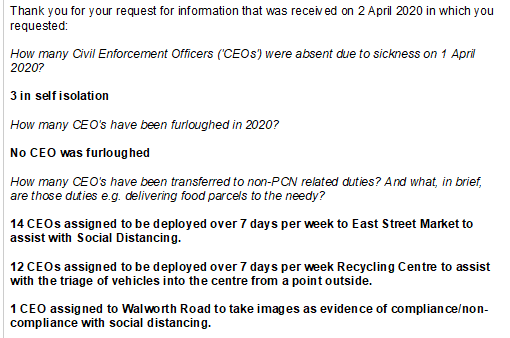 That is very interesting, gathering evidence of social distancing, presumably outdoors, in the Walworth Rd. As staying 2m, or 1m+, apart is merely guidance, then taking photographs of people seems to be a futile action and how does the CEO know if they form part of the same family bubble or not? This seems to be an unwarranted intrusion into the privacy of the general public going about their lawful business.

Helping at the recycling centre, on the other hand, was a good use of resources.

Mr Mustard
Posted by Mr Mustard at 2:57 pm No comments: