Although services to the Residents of the London Borough of Barnet hardly change, the management structure seems to be in a permanent state of flux and change always costs money, and Mr Mustard is not referring to loose change here. Mr Mustard does not know if there is a revolving door on the front of the management block as he has not been to the site since STC occupied it.
The Accounts for the year ended 31 March 2011 ( not yet signed off ) include a table of salaries for Senior Officers and show any pay-offs ( compensation for loss of employment in accounting speak ) received by Officers who got shown the door in one of the numerous reshuffles. Here is the table :- 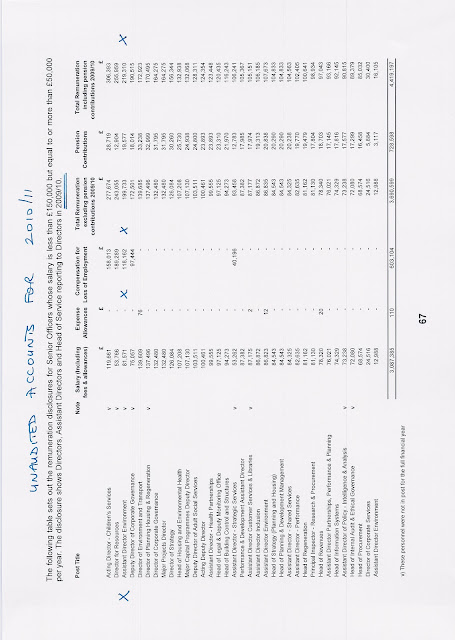 Sorry it is sideways. You can look at these entire Accounts here
Mr Mustard has put x marks next to the line of interest. The Assistant Director Environment left the Council in 2009/10 with a payoff of £118,162
As they had already been paid £81,571 for that year they most probably left ( were pushed? ) in the first quarter of 2010.
So this was the deletion of a post that was no longer required?
What do we see now in the just issued Corporate structure chart? yes, the post of Assistant Director - Environment; Mr Mustard thought that was a bit odd as only last year the post was not needed.
Then he went back and looked at the Interim Corporate Structure chart from December 2010. Oh yes, there we are Assistant Director - Environment ( Lynn Bishop ) at the end of the same year as the previous incumbent left with a sackload of cash, in fact more salary than the current incumbent is paid in a year, so it would have been cheaper to keep the former incumbent of the post.
Then Mr Mustard looked at the senior salary information for October 2010 and lo and behold there is Lynn Bishop on £88,986 p.a. so that is an even shorter gap between one AD of Environment going and the replacement arriving. Now having done some research Mr Mustard finds that Mrs Bishop was previously in Greenspaces so at least a fat recruitment fee was not paid to Hays to move her up the ladder.
Doubtless Mr Mustard will now have to suffer a Yes Minister comment from someone at Barnet Council telling him why the new AD Environment is completely not the same as the old one and that giving the old one £118,162 to go home was
focusing relentlessly on efficiency to ensure every public pound is spent wisely

Your new addition to the cabinet, Cllr Longstaff, must have been giving you some one-liners from his stand-up routine Cllr Cornelius ?
Yours frugally
Mr Mustard
Posted by Mr Mustard at 10:53 am