Now the website of the council says that there are not targets for issuing Penalty Charge Notices, or "parking tickets" as they are more commonly known. Here are the pages concerned, the no targets bit is on page 2..

Now take a look at the staff briefing for the period April to June 2011. 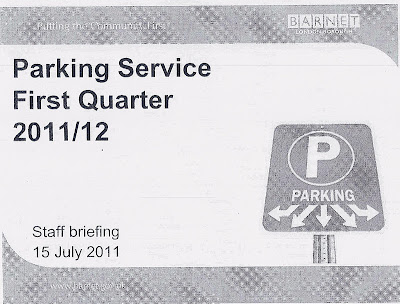 Sorry about the quality of the scans. 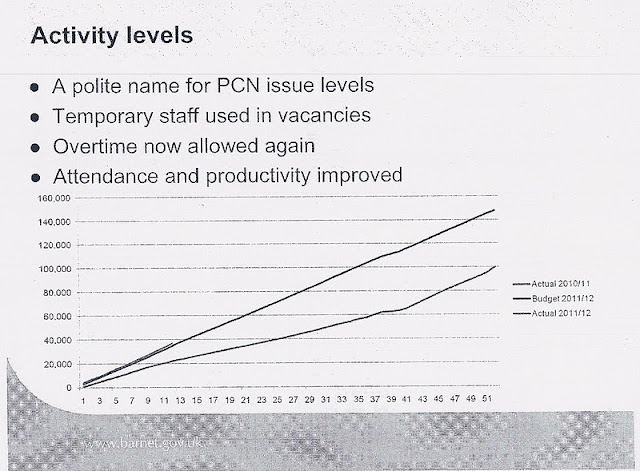 "Activity Levels" are just so "One Barnet"; what you mean is "how much money did we rake in?". It isn't very clear from the graph as to what is what. There is a short line that goes to week 12 or 13 above the long straightish line. That will be actual 2011/12. The longer line is target for 2011/12 and the lower line is actual for 2010/11. So you can see that a decision ( by person or persons unknown ) has been made to be much tougher on collecting money for parking this financial year. Is there any evidence that congestion is much worse this year and so this huge increase can be justified? none that Mr Mustard has seen. 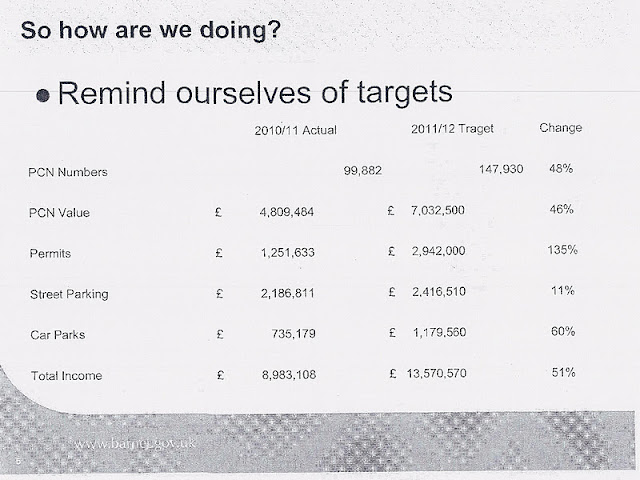 So almost 50,000 extra tickets are going to be issued. Welcome to Barnet. There should not be a target for issuing PCNs. This report clearly shows that there is.
A 135% increase in permit sales is anticipated. The price of most residents permits went up by 150% and visitor vouchers by 300% but each month only about 1/12th renew so the % increase is phased and a number have not bothered because of the expense.
Only a modest increase expected from pay & display on the streets. One would have expected rather more due to the removal of free bays but again many people have changed their plans due to the price increases.
Car Parks have also had their prices increased and are not full even on Saturdays in High Barnet so this might be a target too far. Some people want to pay to park but they can't and so this will hit income levels. 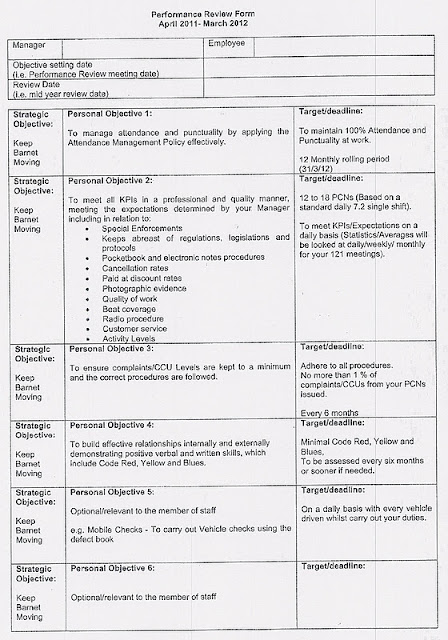 Personal objective #2: CEO, or Civil Enforcement Officers, must issue 12 to 18 tickets per 7 hour shift. That is a Target/Deadline. It is completely wrong and against government advice. The performance figures will be looked at in 121 ( one to one ) meetings and if you miss your targets you will doubtless be "encouraged" to do better.
Expect next quarter's report not to have the word target in it but some euphemism or for the report to disappear altogether and be replaced by a verbal report. Expect Personal Objective #2 to be reworded.


Updare 18 December.
Thank you to Ron for details of NSL's mishaps in Brighton. Here is a link to that story. 17500 defective tickets
These do not sound like the sort of operatives we want in Barnet.

Funny isn't it. If you had asked Mr Mustard a year ago if he would argue in favour of parking meters and traffic wardens, he would just have laughed.

Yours frugally
Mr Mustard
Posted by Mr Mustard at 5:33 pm