Nothing in the world can take the place of persistence 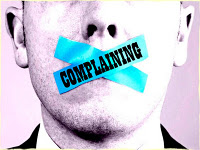 Mr Mustard is grateful to the excellent Malice in Blunderland blog for the above image and Mr Mustard notes that councils trying unreasonably to shut people up seems to be a common tactic.
On Friday a new Delegated Powers Report appeared and here it is
DPR 1518 Barnet Council Complaints Policy


Never slow to come forward when things are wrong Mr Mustard has sent in what is probably the first complaint under the new complaints procedure which is that the methods by which one can complain do not include by email. The council is trying to push us into e-forms for their convenience. Does it not occur to Barnet Council that if they have inconvenienced someone to the point of complaint that the complainant should have the choice of communication method ( Mr Mustard is off to find out if one can actually send a Harry Potter howler ).
Mr Mustard will share the reply with you in due course. If  he is unhappy with the reply he will bang on about it until the matter is fixed.
For an example of what a straitjacket the e-form is why not visit the LGO website here and fill in a bogus complaint just to see how unfriendly the system is. Suggested data is a postcode of N11 1NP ( not NW11 1NP as it says at the end of the council policy - more sloppy unchecked work ) and an email address of julie.taylor@barnet.gov.uk
Be as inventive as you like about your complaint, maybe that there isn't any room to park at NLBP or that executives have their own section, there are too many consultants, too long is spent on writing stupid policies - fire up your imagination and let fly. A copy of the complaint will get sent to the email address you enter. Remember that your computer address will be logged so keep it amusing and clean.
This is what the LGO say is unacceptable behaviour:
· Refusing to specify the grounds of a complaint, despite offers of assistance with this from the authority's staff.

Mr Mustard does not agree with some of the above. He thinks it would be eminently reasonable to write to all ruling councillors every day to complain about cashless parking because if a decision is wrong it should be vigorously challenged until the culprits see reason.
The council would do well to learn from Calvin Coolidge

"Nothing in the world can take the place of persistence. Talent will not; nothing is more common than unsuccessful men with talent. Genius will not; unrewarded genius is almost a proverb. Education will not; the world is full of educated derelicts. Persistence and determination are omnipotent. The slogan press on has solved and always will solve the problems of the human race. No person was ever honored for what he received. Honor has been the reward for what he gave."
Keep on verbally bashing the council until they see sense; once they take the correct decisions, complaints will simply fall away.
Bloggers will not be denied their freedom of speech.

Yours frugally
Mr Mustard
Posted by Mr Mustard at 8:00 am

Email ThisBlogThis!Share to TwitterShare to FacebookShare to Pinterest
Labels: complaints, freedom of speech