Here is another email from that nice and helpful Mr John McArdle the interim Parking Manager ( to be fair to the PM he is between a rock and a hard place in his job - or between Scylla & Charybdis for the more educated reader ). Do remember to email him on john.mcardle@barnet.gov.uk if you have any problems with your parking ticket not getting such generous treatment as he is obviously kindly disposed to give. 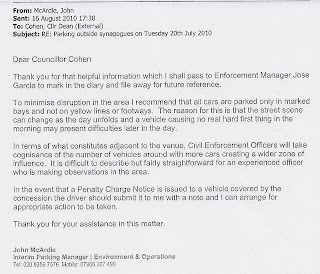 The helpful information was the list of holiday dates seen earlier which is evidently going to be used as it was filed away for further reference. Mr Mustard cannot see why cars parked illegally on yellow lines should not be ticketed and as for parking on the footway, that is terrible. The footway is for pedestrians and not for cars ( except when specifically marked out for pavement parking following the necessary strengthening works ).
A marvellous example of councilspeak follows and describes "adjacent to the venue". What Mr Mustard thinks it means is that the council will ignore mass illegal parking close to the venue until they come across some spaces at the edge of this orgy of wrongdoing.
"Appropriate action" wouldn't be to educate drivers to park properly would it? It would be to cancel the PCN.
"Thank you for your assistance in this matter". Don't make Mr Mustard laugh. Cllr Dean Cohen has not assisted you Mr McArdle. You have assisted him and hundreds or thousands of his voters ( Mr Mustard is not claiming that Cllr Dean Cohen took these actions in order to win votes, although it won't have done him any harm, but he probably got asked once and then like Topsy the problem just grew. If only you had told the first person who asked you Cllr Dean Cohen, to pay their ticket as Barnet Council need the money and then you wouldn't be in the soup now ).
Yours frugally
Mr Mustard
Posted by Mr Mustard at 12:00 pm