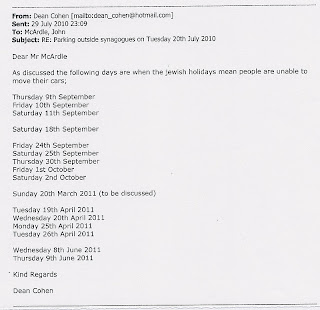 Well, not content with having at least one parking ticket cancelled it looks rather like Cllr Dean Cohen is on a roll and trying to prevent any more parking tickets from being issued in certain areas on 15 further dates.
Mr Mustard wonders why Cllr Dean Cohen doesn't just advise everyone affected to follow the times of each zone and to park their car legally before the holiday starts and then collect it afterwards? rather than use his position as a councillor in this way.
Now let us equate being unable to move your car for religious reasons to being unable to pay for your parking because you do not have a mobile phone and/or debit/credit card.
Do the council give you any leeway whatsoever for this? No they don't.
Yours frugally
Mr Mustard
Posted by Mr Mustard at 3:28 pm