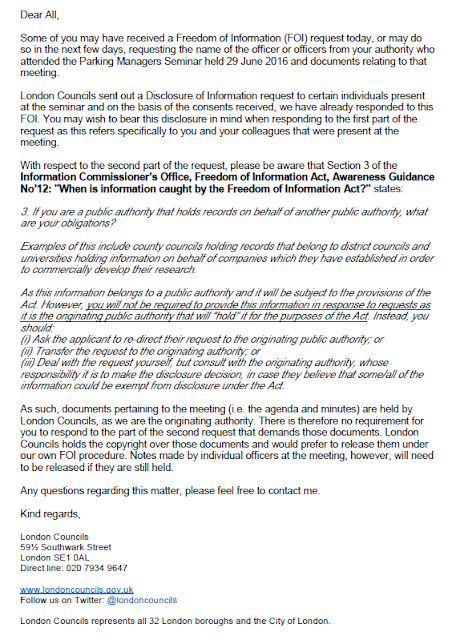 When Mr Mustard was struggling to obtain the full set of documents from London Councils and the names of the parking managers or substitutes who attended, he decided to go straight to the councils concerned as they would, if the employees were senior, have to tell him their names. He did this on 13 September.

On the very same day London Councils had heard from some boroughs of Mr Mustard's* request for the minutes etc. and they decided to email other councils in London to warn them of the likely request. Bo so doing, they effectively outed Mr Mustard as having already asked London Councils the same question. The whole point of FOI is that it is applicant blind. It isn't when bodies take it upon themselves to send circulars like the one above.

What London Councils didn't point out was that they told Mr Mustard there weren't any documents (in addition to the agenda and minutes) appertaining to the meeting. That was odd, and wrong, as the minutes themselves referred to two documents about PCN codes and utility suspension charges.

The councils around London weren't holding the document on behalf of London Councils but in their own capacity as parking authorities for their own areas.

Mr Mustard though that the 'if they are still held' comment was an unspoken suggestion to chuck away any minutes that individual officers had taken so that they did not have to be disclosed. Certainly many council did not have any notes to disclose.

You can rely on Mr Mustard to battle to the end. The denouement is coming soon.

*Whether or not any indivdual council who consulted London Councils released Mr Mustard's name is not a question he asked.
Posted by Mr Mustard at 5:19 pm