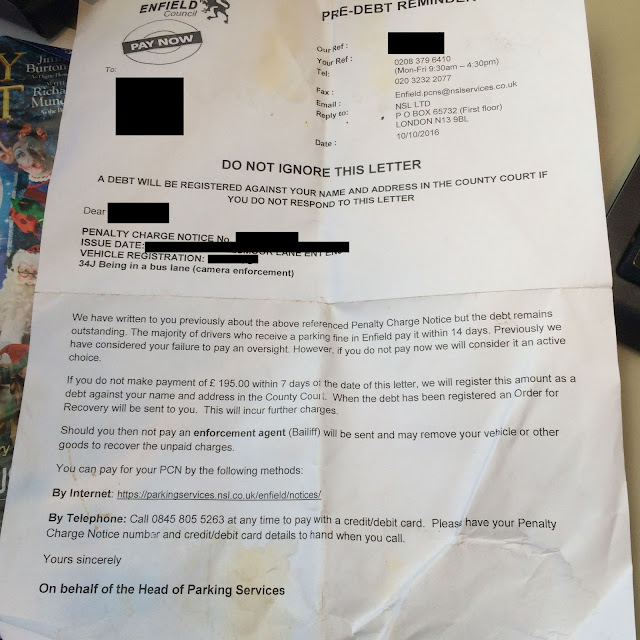 Mr Mustard carefully explains to his clients, and sets out in his written guide (to be updated and published as an ebook shortly) the steps in the Penalty Charge process.

Then some councils decide they want to add to the process, which a clever legal draughtsman has carefully worked out, and send non-statutory documents. This leads clients to think that Mr Mustard doesn't know what he is on about and undermines his credibility. It also puts the wind up nervous motorists who are now driving in unknown territory.

A few months back Mr Mustard complained to Haringey Council about their pre debt reminder letter and by a happy coincidence they had decided to stop using it the previous week (Mr Mustard also believes in Santa Claus).

When Mr Mustard's client received the above letter he wrote to Enfield's parking manager who is always prepared to engage, usually replies quickly, answers the same question as is asked and seems to be a perfectly reasonable chap.

Mr Mustard's critique of the above letter was this:

I attach an authority letter and the pre-debt reminder about which I wish to complain, as a matter of principle, not just for my client.

There is a statutory process which I tell my clients about. It undermines my credibility when local authorities then take steps which are outside it and in my view to depart from the statutory process is procedurally unfair and the pre-debt reminder should not be sent.

The complaints about the wording of the pre-debt reminder are:

- It states that a debt will be registered. The legislation only allows that may happen, if the county court so orders.
- It is headed pre-debt reminder but then the letter states "the debt remains outstanding". At this stage of the process there is no debt.
- It refers to the majority of drivers paying parking fines within 14 days. The pre-debt reminder is about a bus lane PCN so the statement is not relevant. Please also prove it is true by telling me the number of parking PCN issued on 14 October 2016 and the number of them which have been paid at 50% by 27 October 2016. (This can be answered as business as usual or FOI).
- On what basis was my client's failure to pay an oversight? There are other possible reasons. How did you decide that it was an oversight being as how you have made a factual statement?
- How do you consider my client's failure to pay can be attributed to a positive choice, a factual statement on your part? There are other possible reasons.
- Why do you not state that the further charge will be a mere £8? Is it because you want to worry people into thinking it could be a lot more?
- Why do you not mention the witness statement procedure in order to fully explain the choices which may be available to vehicle owners? Is it because all you are interested in is revenue raising?
- Who selects the cases to receive this reminder? Is it an NSL or council employee?

After a little nudge, as Mr Mustard thought the reply might have been issued when his email was broken, he received the following:

I apologise for the delay in responding, normally I can get back to you promptly but in this case I was unable to.

With regard to the generic pre-debt letter, thank you for your comments all of which are noted and we will review the letter next week and make changes as all your points are valid.

The letters are sent to all those with unpaid PCNs after Charge Certificate stage and before Order for Recovery stage. With regard to your question 108 PCNs were issued for being in a bus lane on 14 October 2016 of which 57 were paid at discount stage (by 27 October 2016). (Only just a 'majority of drivers').

Mr Mustard commends Enfield's parking manager for facing squarely up to the criticism and agreeing to change the letter. Mr Mustard has now asked him to stop using it entirely. Let us see what happens next.

Mr Mustard
Posted by Mr Mustard at 9:36 am