A motorist wrote to the Chief Executive:


I am writing to make an official complaint with regard to the letter that I have received from the Parking Department dated 06/10/2016, in relation to a parking ticket issued in 2012.

First of all I am very shocked and distress to received this letter, as I cannot recall a parking ticket or the event for something that has taken place over 4 years and half ago. This is a clearly breach of my Human rights.

The letter which I have attached states that you have sent a” number of notices” to myself advising me to discharge the liability of the PCN.  First of all I would like to make absolutely clear that I do not recall having received a “number of notices” that you claim to have sent.

In order to establish the “number of notices” that you claim to have sent please provide the dates of all documents you have sent. I would like copies of these documents please.

It is very unfair that the parking department are suddenly bringing back to life in 2016 PCN from 2012 which should have been written off by now as they have not been processed with reasonable expedition. It is unfair to proceed. It is an abuse of the council's powers to act in this way.

Please investigate what is happening in the parking section.

The Chief Executive promised that an investigation would take place. A few days later this reply was received, which Mr Mustard has edited for clarity and commented upon:


I acknowledge that it may have come as a surprise (shock, more like) to receive our latest letter regarding your outstanding PCN. We are in the process of closing (not closing) outstanding cases and it came to our attention (why now all of a sudden?) that your PCN had not been paid or successfully challenged since its issue.

There are statutory time scales in place which govern the enforcement of PCNs but once a Notice to Owner has been served correctly, and no payment has been made, the Penalty Charge remains outstanding and the Council can take action to recover the money owed. While it may have been some time (years) since we last contacted you about the PCN I do not believe it is unreasonable (Mr Mustard, London Councils and adjudicators all do) to attempt to resolve (demand payment) the case in this manner.

Our records show that you were initially issued with a Notice to Owner (NTO) on 09/07/2012. The case continued to progress and we sent a Notice of Debt Recovery (a non-statutory document which simple causes confusion & and is aimed only at securing payment) to you on 26/06/2013 at which point you field (sic) a statutory declaration reverting the case back to the NTO stage. A second NTO was then issued on 14/08/2013 and although we did receive a phone call from you at that time no correspondence challenging the notice was received and so the case continued (failed) to progress.

I am satisfied that we have adhered to the statutory time frames (Mr Mustard isn't satisfied) set out in legislation and were therefore entitled to pursue the payment that is still due. However, I have now reviewed the particular circumstances of your case and noted that in the past you have promptly paid all other PCNs that have been issued to you. Given your good history in this regard I have decided to cancel the PCN on this occasion and can confirm that no other PCNs are outstanding against this vehicle. (How jolly generous of Brent Council given that they are up the creek without a paddle).

Two things that Brent Council need to take account of. 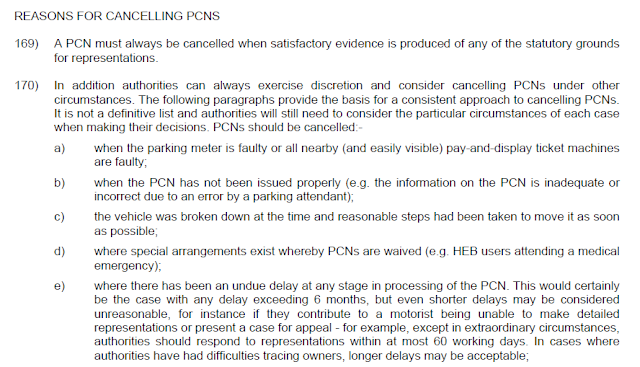 This adjudication decision, 2130453008, one of a dozen similar decisions in the memory of Mr Mustard 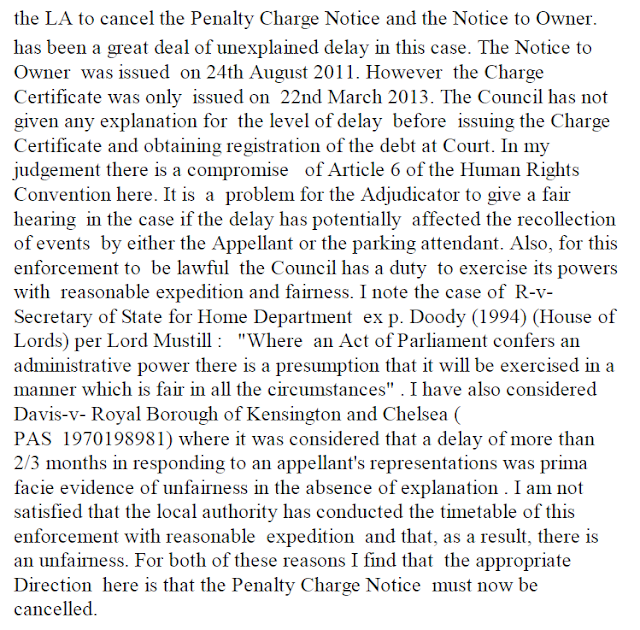 There hasn't been reasonable expedition. Mr Mustard isn't concerned about the case he knows about, it is all the other motorists who are currently in the sights of Brent Council and are being hassled to pay PCN which the council should have written off by the 31 March 2014 year end at the very latest.