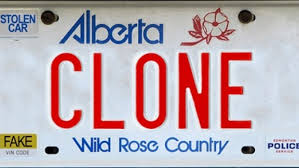 The cloning of cars causes innocent parties all sorts of trouble. This is the message which Mr Mustard received from such a party.

I have been recommended to contact you about a cloning problem I have with my car and registration. I have received PCN from both Brent (a bus lane contravention) and Barnet Councils(3 parking PCN).  On receipt of my appeal Brent council have cancelled their PCN, however Barnet Council refute my evidence as insufficient despite me providing clear photos, a letter from the DVLA and an email from the Police advising of my issue with my cloned number plate and it being added to the ANPR watch list.  Barnet council have since cancelled the first PCN due to an undisclosed technical error? however 2 PCN remain which I now have less than 28 days to appeal to an adjudicator.

I have since written to Barnet Council with the below info and asked again for them to re-consider but without success. They request an official letter headed letter from the Police which I have requested from the Met Police which I understand can take 40 days to action which will take me past the 28 day appeal deadline.

I have attached photos of my vehicle which clearly shows some differences with the clone vehicle photographs provided and also a letter with regards to the cloning from both the DVLA and Police who now have the vehicle on an ANPR watch list.

Please note the difference in number plates. My plates feature the original 'Stratstone' dealer stamp front and rear and postcodes, whereas the clone vehicle shows a blue GB logo and no dealer information. I am the original owner from new which the DVLA can confirm.

Please note the interior scheme in the 2 cars is very different. My vehicle has a non standard plain cream interior with a cream dashboard. The vehicle in question is showing a cream and black striped interior. This is clearly shown in the PCN photos.

Please note that I live in Worcestershire which is 130 miles from this location and can confirm that my vehicle has never been in the central London area as I work from home.

I am a law abiding citizen with no criminal history, and feel frustrated that I am being penalised and evidence disregarded. I also fear I will receive further penalty notices

Any help or advice you can provide would be much appreciated.

Mr Mustard wrote to parking management at Barnet Council and let them know he would be attending the Appeals at the tribunal and suggested they might now want to throw the towel in rather than waste £60 in tribunal fees.

All of a sudden the unacceptable evidence that the motorist had sent them, but was acceptable to Brent, became acceptable to Barnet. Motorists should all be treated fairly and it shouldn't take the involvement of Mr Mustard for blindingly obvious valid challenges to be accepted.

Mr Mustard had noticed in the past the number of cloned vehicle cases which have to go all the way to the tribunal and the Appeals are invariably allowed. He hasn't had an answer to his question as to why Barnet Council are so reluctant to accept the evidence of motorists in this regard. It couldn't be the money could it?

So that is Barnet Council's reputation damaged in Worcestershire but the affected party won't be completing a resident satisfaction questionnaire so will anyone at the council care?

Mr Mustard
Posted by Mr Mustard at 7:00 am