Bloggers often wonder who is running the council, whether it is councillors, officers (a poncy name for staff, or more exactly the senior management team) or Capita and the answer is probably done of them. It is a runaway horse which goes where it wants.

Mr Mustard decided to go to the first meeting of the new Community Leadership Committee even though it sounded pretty awful but he happened to have a free evening so off he trooped. First though, he banged 11 questions in.

Here are the papers:
Community Leadership Committee by MisterMustard
Mr Mustard was initially struck by the modest size of the budget, £1.9m and that 10 councillors were going to have regular meetings about this tiny sum. He also thought it showed the lack of concern for Community Leadership in the borough. Then you will note that £800,000 of this budget is to be axed, the most savage cuts to any council budget.

Anyway, what annoyed Mr Mustard first of all was the usual sloppy presentation by officers and the omission of vital facts and so he set to and asked for what was missing (one councillor also planned to do this but Mr Mustard got in first). here are the first 5 questions: 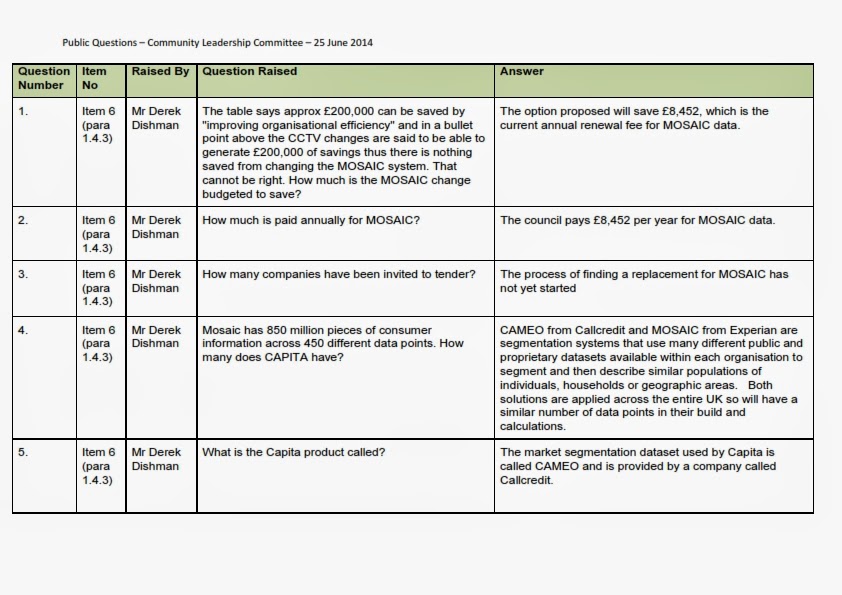 So although it was said that a saving of £200k was possible from organisation efficiency in the running of cctv (a seemingly bottomless well of future aspirational possibility) which probably means staff cuts and really the report should say exactly how (and councillors should ask how) they was an extra £8k from axing MOSAIC. Thus the total was wrong and there was a lack of detail.

Mr Mustard asked the supplementary question if Capita would provide Callcredit (Cameo) for free. The answer was that it was part of the Contract.

At this point it was obvious that councillors were being asked to approve something which was already contracted for elsewhere so for officers to ask councillors to approve this saving on MOSIAC without telling them they had already committed the council to CAMEO was somewhat naughty. Of course David Longstaff was part of the Cabinet and so he should have known this was part of the NSCSO contract except he probably never read the 2000 pages. To be fair to "goldenarse" he wasn't very happy with the situation once Mr Mustard got stuck into his extra questions and he did answer clsoed questions with a yes or no whereas others might have tried to ride them with a load of waffle.

Mr Mustard's extra question for Q2 was for an explanation of table 2.1 as he couldn't understand why the £10k was not in the first column but was in the second. There was no heading for this table, by the way, but Mr Mustard worked out it was currently planned spend (before the axeman cometh). Here it is: 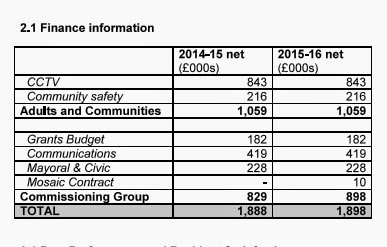 The answer given by Steven Evans, Assistant Director of Commissioning Strategy, was that the table was wrong. He doubtless doesn't regard £10,000 as material as he probably costs the council that much every month (Mr Mustard is happy to publish the actual salary band & pension cost if it is provided to him). Oh dear. How is it that errors keep on appearing in reports and that no-one spots them, or bothers to correct them, before they jump off the page at Mr Mustard. This table is just so obviously wrong.

So the answer to question 3 is basically a lie as there is already a contract with Capita as Chris Naylor the Chief Operating Officer had been quick to tell Mr Mustard on twitter. He knew he had hit a nerve when Mr Mustard has the COO asking him on twitter what is wrong with Callcredit (Cameo). Possibly nothing is the answer but given the established market leading position of Experian (MOSAIC) and the lack of complaint about it, to change is not worth the bother.

For question 4 the council had to ask Capita for the answer as the council didn't know the answer which is a terrible admission that a proper comparison had not been done before the Capita contract was signed.

It seems, from the answer to Q5 that Capita don't really have a product at all (except they add their own data into it which is of course council data) and are just badging someone else's product and you might as well cut out the middleman and save money. Mr Mustard wonders if they added more or less than £8,452 into the contract price for it. Doubtless the answer is top secret. 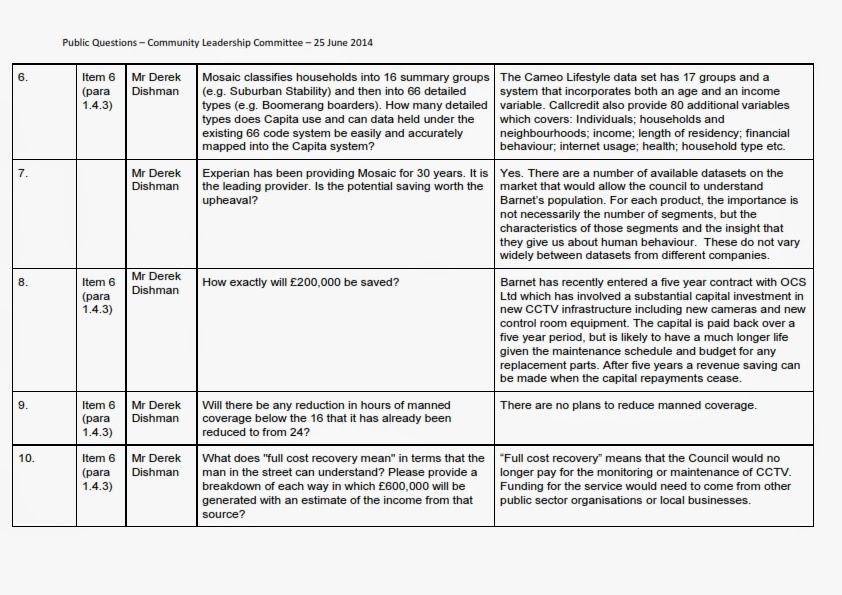 The answer to Q7 was pretty pointless in talking about other data sets as the council's corporate mind was already made up. It is easy to say the sets do not vary widely when do detail is given. A typically vague council answer.

The answer to Q8 shows how hopeful this £200k saving is. They think that once the 5 years are up they can make the equipment last longer. Of course one of the reasons for replacing the cctv network was that it had become old technology and needed replacing. The same will be true of what we have just purchased. the council are also over a barrel with this supplier and will have to take whatever terms they are offered in year 6 or start over again. Come back to this posting in 2017 and see who was right.

So the council haven't done any market testing but think they can persuade local businesses to cough up £600,000 for unknown cctv services. Mr Mustard has his doubts. The council should not go into competition with other local businesses.

So do councillors run the council? It doesn't seem so based solely upon the knowledge of the chairman of this meeting who presumably reads the agenda before it goes out and should have picked up that he was being asked to chair a meeting about a fait accompli.

Do the officers (senior management) run the council. They present vague reports which don't add up and try to pull the wool over the eyes of councillors. That isn't going to end well.

Do Capita run the council? One thing Mr Mustard doesn't like about the Capita deal is the lack of transparency about whether officers (senior staff) are employees of the council or of Capita as their raison d'etre are different (Capita's is to make money, the only reason a commercial company exists) and neither Stephen Evans nor James Mass appear in the list of highly paid employees in the notes to the 2014 Annual Accounts which makes me think they are now Capita folk. Mr Mass was previously with Impower. Mr Mustard recalls that one of his previous reports to committee about the future cctv system, which is already being cut, contained a massive blunder figure wise. Lets hope he checks his work better in the future. We can't afford to let Capita run the council as they are doing so badly on residents permits, telephones, customer service, payroll, councillors' IT etc.

Mr Mustard will keep asking awkward questions until such time as reports are complete, concise and accurate.