Executive summary : Despite paying Craig Cooper £132,480 p.a. for some years to be the "Commercial Director" procurement has not been properly controlled and maverick buying is systemic.

There is a plan to centralise procurement. This is the antidote to the previous plan to move procurement to the directorates. After, procurement will be out-sourced and they will probably ditch the centralisation plan as being over-managed.

Mr Mustard can't bring you the whole plan, although he has it, but the bits he does bring you will be more than enough to shock you.

The plan was produced in April and has the name of Lesley Meeks, Assistant Director of Commercial Assurance (Town Hall Tax Dodgers branch) at the end. Snippets will be presented by Mr Mustard along with comment.


Any change to 'the way we do things' has three elements, tools, processes and people.

The graphic is out of focus probably because it has been cut and paste into the plan from somewhere else. That is Barnet Council to a t - out of focus. If you search for tools, process and people you find lots of example in google images; this is not an original concept, we are paying people massive salaries to repeat textbook stuff.

Presently there are a number of reports that present data. One of the changes to the tools will be to build reports that provide management information. A simple area would be the reporting on vendors. The vendor list has already been reduced by 50% and the objective is to further reduce. The current reports don't appear to be useful is the conclusion that Mr Mustard draws from this. The vendor list being reduced by 50% is another example of local business being sacrificed on the altar of administrative convenience.

What does the guide "How to do business with the council" say:
The Council cannot discriminate in favour of local suppliers but they will be given every encouragement to compete for Council contracts.

Chopping the supplier list in half, thus making the probable average contract value double what it is, will naturally discriminate against local business who have already suffered enough from the hike in parking charges and difficulty in paying. Have you noticed this councillors so you can rein in the officers?


Presently when a requisition is raised in the system it can be raised against an existing contract or vendor. The route to ordering directly from a supplier can lead to over-spend and non-compliancy as it is not going through a compliant contract. This buying route will be closed in the system. So it looks like anyone can order anything against an existing supplier and this is why the £25,000 limit was so easily breached in the past. This will be stopped; it has only taken a year since MetPro, such a turn of speed!


With the procurement route to vendors is (sic) closed off in the system, the only route available will be through an existing contract, catalogue or framework (the 'green route').  = In the future we will be compliant. Are we supposed to cheer?

At present approximately 1000 purchase orders per month are raised using the 'free text' or 'red' route and of these a large number are raised verbally and then purchase orders raised retrospectively (there were ~800 retrospective orders in March 12). There is work presently underway, which is planned to be completed end April 2012 that will limit spend on contracts, however the route direct to vendors also needs to be 'closed'.

Sadly Mr Mustard had to listen to Craig Cooper, the unCommercial Director waffling on at the Audit meeting of 26 April 2012. He has his manuscript notes, and probably a tape recording as well. His notes about retrospective purchase orders are that Cooper said "still a number coming through. Are an expected activity - are trying to manage it down". Lesley Meeks, Assistant Director of Commercial Assurance (not on the payroll though?) said she was "going round service areas to look at exceptions. Will monitor retro P.O. in order to stop them in the future"

Lord Monroe Palmer said he did not want to see retro P.O. in non urgent areas and Meeks hoped to show if it was achievable at the next meeting.

This is all very unsatisfactory to Mr Mustard. Officers when reporting should not waffle "still a number" Craig, really how misleading of you. When officers report they should be asked to report facts. If any councillor had asked how many PO were retrospective we could have had a much more informed discussion on the subject.

Also when the boss of the Audit committee says he wants to see something, especially something enshrined in the rules, then the correct answer should be that it will not be done, not I'll see what I can do.

Mr Mustard can't recall, and his notes do not show, this specific question coming up at  the June meeting. The Procurement Action Plan had by now been in existence for over a year and still there is a problem with retrospective purchase order. Note no. 8 said "Each Directorate is reviewing the use of retrospective purchase orders in their area and reporting  back to the Working Group. Presently we are identifying exception (sic) where it may be necessary to raise a retrospective order. We will then report and monitor by purchase type and ensure that orders are placed with corresponding purchase orders. Action on track for July deadline."

The closing down of the 'red' route has impact on people in both delivery units and CPT. For this reason the approach will be a three step approach: all contracts will have contract limits; workshops will be run with delivery units to change process and the vendor buying route will be closed down. The workshops will establish a new way of working as well as identifying any exceptions and uniqueness's (sic) within the delivery units.

So a year after MetPro and contract limits were not in place. Pathetic.

As described in section 2.1 the first level processes of the P2P systems will be changed in order that there is only one process available to selecting a buying route. (ie through compliant contract, framework or catalogue). This process change will stop the potential for contract overspends and maverick buying.


( P2P = Purchase-to-pay systems automate the full purchase-to-payment process, connecting procurement and invoicing operations through an intertwined business flow that automates the process from identification of a need, planning and budgeting, through to procurement and payment. )

Barnet Council - the home of the maverick buyer.

At this point the ridiculously complicated chart which is at the top of the article appeared and then the following text.

The aim is to have this process working smoothly before the transition to NSCSO provider.

Two comments.
1. That doesn't leave long.
2. The NSCSO provider will almost certainly scrap the lot as they are not bound by EU rules or probably any council rules either.

A contract management e-training tool will be rolled out during May 2012. The process will ensure compliance with contract procedure rules as well as providing guidance on how to monitor the effectiveness of the contract and gather performance information. We'll see how they do.

The approach to implementation is through workshops with the delivery units, establishing those processes which are common across LBB and those that are specific to units. The workshops throughout May will identify the interfaces between a centralised outsourced procurement and the delivery units, agree roles and responsibilities, map top level processes (recognising exceptions and uniqueness) and agree management reporting. We will work it out as we go along. 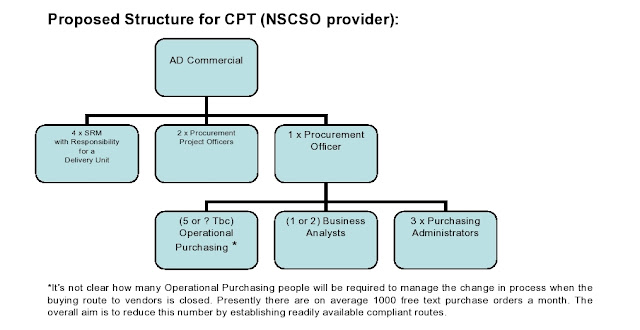 Will the NSCSO want a well overpaid AD?

An unknown number of buyers, what sort of plan is that? Craig said 5 or 10 at one meeting and got pulled up on it.