Readers may not know but before every forum there is a forum of council officers (employees is a less grand term) who look at the questions, kick the answers around and try and paper over the cracks in the answers. Going back to September 2010 we have the following two questions from Mr Reasonable which were sent to me as part of a FOI answer with the names of Mr Reasonable and the now redundant Pauline Bagley of Barnet Council crossed out (or redacted as the council likes to put it - Middle English, from Latin redactus, past participle of redigere). There is little point in redacting information which is already in the public domain is there Barnet Council? 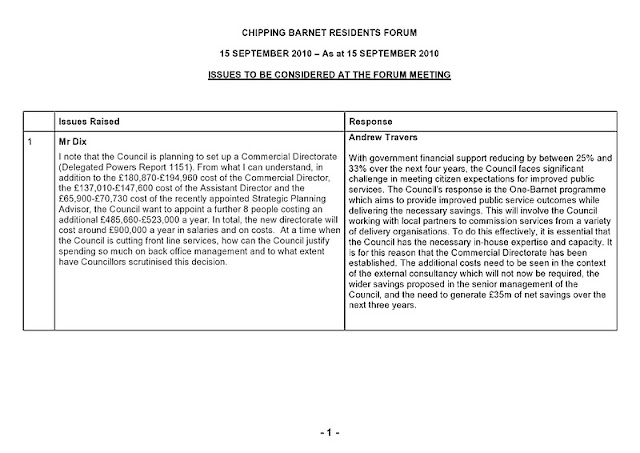 What Mr Mustard found interesting about these two questions, is that the answers contain a lot of padding and gloss over the serious parts of the questions. Mr Mustard wasn't there that day ) he didn't exist then ) and perhaps John had another go at getting an answer although that may not have been the point of his questions.
Also very interesting were the following four emails:

So who got involved in answering two straightforward questions? ( in order of appearance )
let us leave to one side Pauline Bagley ex Democratic Services.
Commercial Director, Craig Cooper, £132,480 p.a.
Chief Financial Officer, Andrew Travers, c. £220,000 p.a. ( consultancy fees )
Chief Executive, Nick Walkley, £200,976 p.a.
Interim AD Human Resources, Jacquie McGeachie c. £150,000 p.a. ( consultancy fees )
AD Communications, Chris Palmer c. £135,000 p.a. ( consultancy fees )
Total combined annual "salaries" in excess of £800,000
So Mr Reasonable asks for some little facts and what he gets in return is a spinned answer that took all these people at ridiculous cost to answer.
Non-stick Nick dragged himself away from worrying about the car park for long enough to think about whose name should go on the answers to Mr Reasonable. That is called micro managing and you simply can't manage every last little detail in this way without missing big details like the computer system going end of life or bully boy security guards obstructing public scrutiny of council meetings or the fact that procurement is completely out of control etc. etc. You don't get paid £200k a year to mess about with tiny details but to make big decisions.
As for the "spin doctor" Chris Palmer, and Mr Mustard uses the term very loosely as it is really too important a phrase for the job ( maybe "spin orderly" - better suggestions welcomed ), why is Palmer being used at great expense on this small stuff. Anyone at the council could write a reply which didn't answer the questions; for a lot less money.
Spin will be one of Mr Mustard's 2012 themes.
Yours frugally
Mr Mustard
Posted by Mr Mustard at 8:00 am