Is one of these in North london Business Park? The Charles Babbage Difference Engine.


Here is a report presented to the Cabinet Resources Committee on 14 December. It concerns cutting the bidders for the DRS package from 4 to 2.
Mr Mustard does not comb through reports looking for errors ( and there shouldn't, in any event, be any ) but finds that they jump off the page at him. He will be reading something and a little bell goes off in his head and then he stops and looks more closely. It is a skill that is worth trying to develop.
Here is the report in full.
DRS update report to Cabinet Resources Committee on 14 December 2011


The error that Mr Mustard noticed was on page 13. To save you looking through the whole report, although Mr Mustard does recommend it so that you know what is going on, he repeats the bottom of page 12 and top of page 13 below. 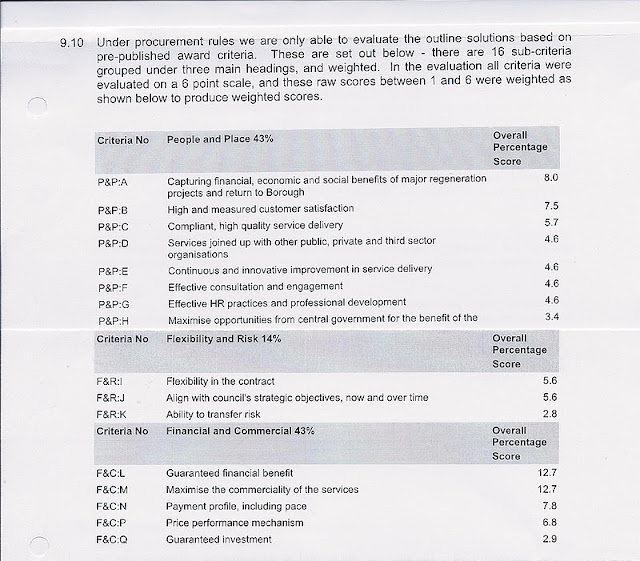 So look at the last set of 5 percentages which should come to 43%. You can see immediately that they don't. How? Well taking the figures after the decimal point first, 8&7 are 15 and double that as they are there twice so that makes 30. Then add on the 9 and you have 39, move the decimal point and they come to 3.9


Take the whole numbers. 2 times 12 is 24, then add the 6 to get 30. Add the 7 & the 2 and you have 39.
Take the 39 & the 3.9 and there is your total 42.9 but not 43!
Anyone can do this. Just take the numbers logically, or get a calculator and add them up.
This error carried through into the actual scoring. Luckily for Barnet Council this is one of their smaller errors and so won't have made a difference to the overall result, but it might have.
What bothers Mr Mustard is that 5 senior officer names are on the front of the report. Probably about 35 others contributed. Well overpaid consultants, supposedly experts, are involved. Six Cabinet members were presented with this report. The combined income of all these people is probably in excess of £4,000,000 p.a. and the fine detail was not given enough attention.
That is what Mr Mustard does not like. He accepts that errors get made. However, they should not be found in reports that have reached the public, they should be spotted long before then. A questioning mindset needs to develop at Barnet Council.
If you can't add up then Mr Mustard questions whether you are worth £130,000 p.a.
Mr Mustard has now found his notes from the meeting.
Cllr Cornelius said "Doubts and sceptical feelings........are disappearing with this report" Perhaps they shouldn't have. Some positive scepticism would be a useful check on the headlong rush to privatisation.
Cllr Thomas said "Figures are robust and can be relied upon". Oh dear, that wasn't true was it?
Cllr Harper said "Has no scepticism whatsoever". Maybe it's time that you had some Councillor. You don't get your allowance just for turning up you know. You should have read every page of the reports beforehand.
Not an early outing for the 3 wise men then was it!
Yours frugally
Mr Mustard
Posted by Mr Mustard at 8:00 am