The day of reckoning is fast approaching. The pay & display machines are to be removed. Here is a copy of their death warrant / delegated powers report authorising their removal. 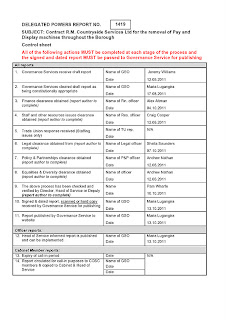 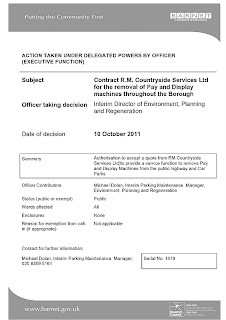 Who is this Michael Dolan ? On his linked-in page it says he has been the Parking Support Manager at Barnet Council since August 2010. He has also been an Operations Consultant at Capita and he worked with the Mouchel team and is ex NCP so it would be for the best if he doesn't get involved in the proposed outsourcing of Barnet's parking and that someone with absolutely no connection to any of these outsourcers were to be involved ( he may not be ). 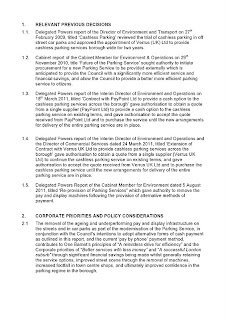 1.2 - what is more efficient than being able to reach into your pocket for a £1 coin and putting it into a slot and receiving a little ticket for your car windscreen? Nothing.
2.1 - why are the machines ageing? Because everything ages, even Cabinet councillors ( some more than others ) and why do things underperform, perhaps because of neglect.
Increased footfall in the shops. You must be joking. Occasional visitors will desert Barnet in droves. They already park halfway down the St Albans Road on the way to the A1 in order to avoid paying.
Improved confidence in the parking regime - which comedian writes this stuff? send him/her to The Edinburgh fringe. 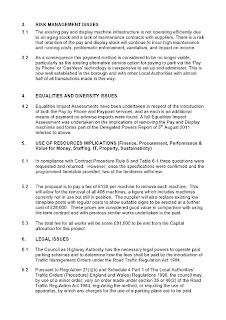 3.1 - A lack of contracts with suppliers - now that does sound like Barnet. But maintenance was mainly in-house so that doesn't wash. Impact on income - now that is the nub of what Barnet care about.
3.2 - Semi-monopolistic situations tend to thrive.
5.1 - When two tenderers withdrew we didn't bother to try and find two more. How lazy are we? 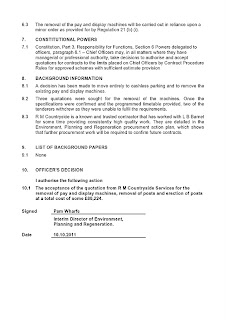 8.3 - RM Countryside were paid £282,487 in the year ended 31 March 2011. Getting proper quotes from other contractors might have driven the price down.

So removing 408 machines at £128 per machine is considered good value "in comparison with using the term contract and with previous similar works undertaken in the past" ( para 5.2 ). This is the usual sort of drivel that Barnet Council put out. What term contract are they on about? Have there been similar works undertaken in the past? no, not of this scale. To make a comparison to an odd removal or movement of a machine is meaningless.
This contract looks like very bad value to Mr Mustard. So it will take 2 men and a flat bed lorry a few weeks to do this and RM will make a huge profit. The basis of starting with a unit price which would be reasonable for a few removals and then multiplying it up for 408 of them automatically means that the council will be overpaying.
The report does not say what will happen to the old machines?
The report does not say how many low timeplate posts will be replaced with regular posts so only the signatory knows whether the price is good value.
These reports really need to be more informative.
Finally, as Mr Reasonable pointed out a few days ago, £80,000 is being spent on removing something that the residents want to keep. Barnet, as Bonkers as ever.

Mr Musatrd has just been through the procurement Code of Practice. He went to the Barnet Council website to make sure he had the latest version. He has, it is dated March 2006 and is noted as being under review as at December 2008. Going full pelt at that review then Barnet Council! There is a dirty great hole in the policy. It does not say that at least 2 tenders must be obtained. What does Pam Wharfe know about the cost of removing parking meters. Probably not much.

Mr Mustard has seen an email from the parking manager that says that he wanted to use RM to remove all of the meters but it is against procedure so he can't There was no mention of the council ignoring its own procedures ; only that a new contractor was being sought. Let us hope that the tender process is carried out correctly this time.
Yours frugally
Mr Mustard
Posted by Mr Mustard at 3:00 pm

Email ThisBlogThis!Share to TwitterShare to FacebookShare to Pinterest
Labels: pay and display