Imagine what you can acheive (sic)

Mr Mustard spends a lot of time on the internet studying Barnet Council. It was while he was doing this that he came across an advertisement in the TES ( Times Educational Supplement ) for a Learning Network Inspector (LNI) which back in April 2010 paid a very nice £60,781 to £67,071
Now there are 117 schools in Barnet and 4 LNI's are somehow needed to be the main point of contact between the Local Authority and the schools in the Learning Network. Mr Mustard is not sure that this is a job with a future as schools become academies and perhaps that is why the recent advertisement for a job share LNI was for a one year fixed term.
Mr Mustard's eye was caught by this post as there was yet another slogan for Barnet Council. Perhaps "Putting the Community First" isn't good enough for schools on its own. They want a slogan of their very own and have gone for "Imagine what you can achieve" except that in the TES it became "IMAGINE WHAT YOU CAN ACHEIVE. This hurt Mr Mustard's eye and as always he passed it across to his co-Director who then started to worry about the education her son had been receiving from the local primary school.
The advertisement follows shortly. Wouldn't you try and get this changed if you were employed at a senior level at Barnet Council? Surely someone somewhere at Barnet Council saw this advertisement and noticed the glaring error or doesn't anyone care? Mr Mustard finds uncorrected errors in reports all too often; it is upsetting. 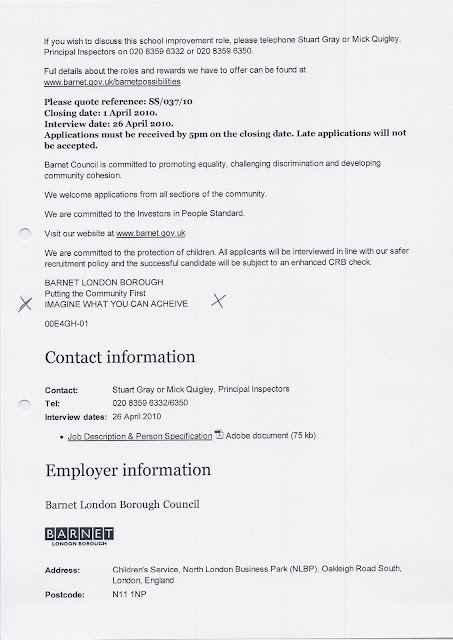 Just in case the glaring error above did not stand out enough Mr Mustard got his pencil out and put two little x's for you. Does anyone care ? 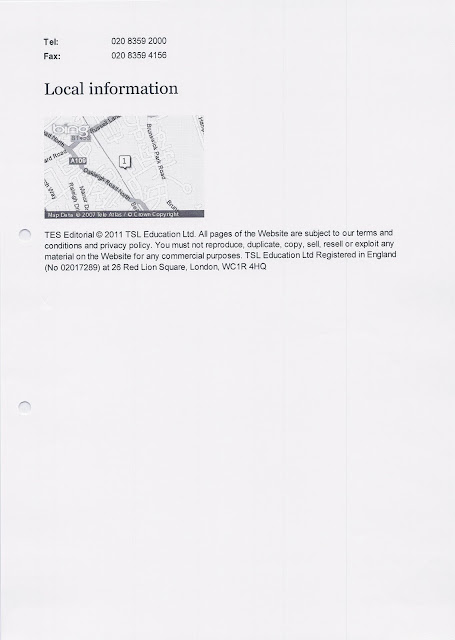 The next 4 pages are the Job Description \ Person Specification as they were in 2010 which Mr Mustard will leave you to peruse. Catch up with him at the 2011 version. 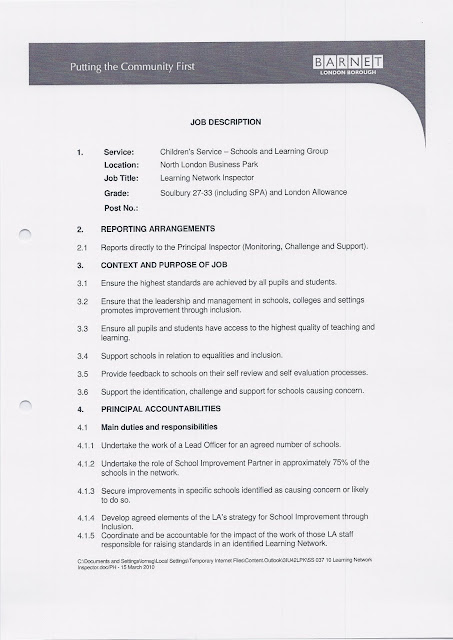 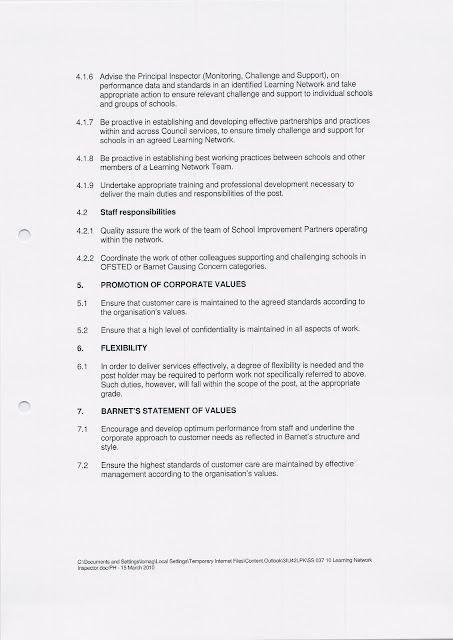 Sorry back early. Mr Mustard just noticed the criteria on the following page that were only desirable and not essential to this role.
Senior management experience in a school ... ( novices welcome )
Knowledge and understanding of the role of the Local Authority ( what, do you have something to do with schools ? )
Budget management and skills ( but you have to manage the budgets for your areas of responsibility. Never mind if you get it wrong, the tax payer will chip in a bit more )
Oh well never mind. All the above is now out of date and a new Job Description follows shortly. 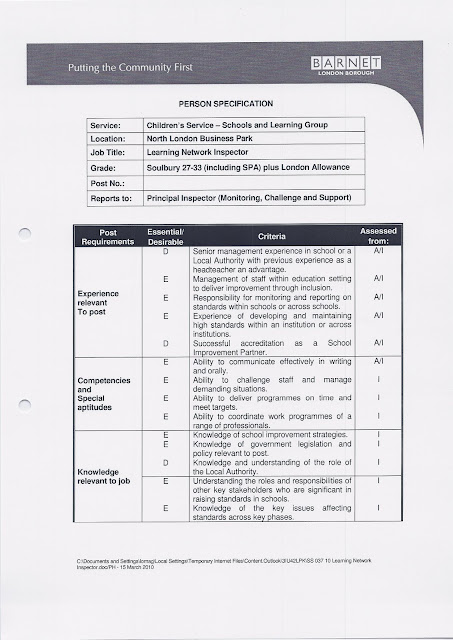 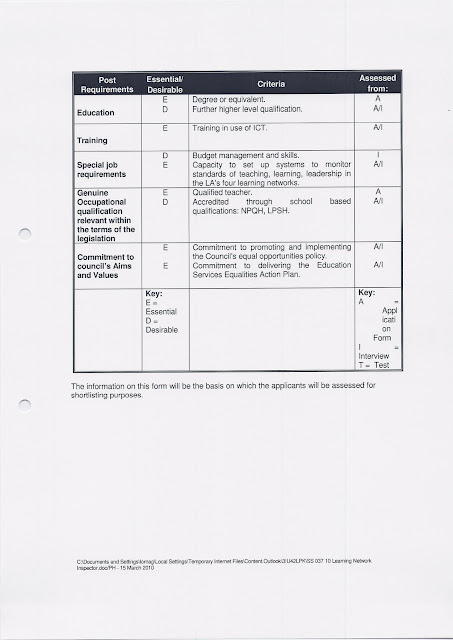 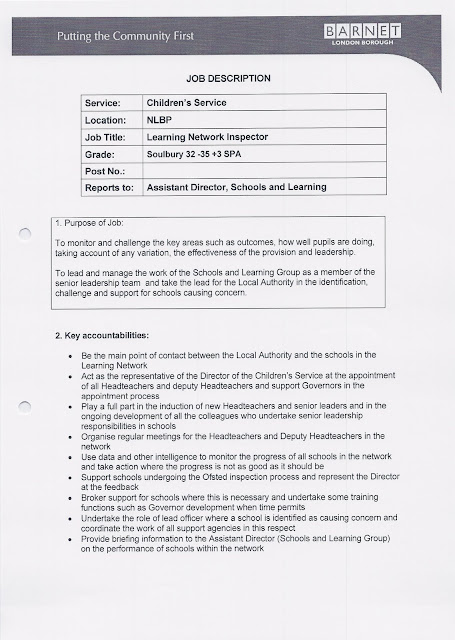 So what does Mr Mustard notice above? The Director of the Children's Service is to busy to be at the appointment of Headteachers and Deputies. How many can change each year out of 117 schools?
The NLI has to arrange regular meetings for Heads & Deputies in the network. The network extends as far as Poole in Dorset as that is where the NLI's will be twice a year at the jollies annual conferences for Heads and Deputies.
The Director is too busy to listen firsthand to feedback from Ofsted inspections. 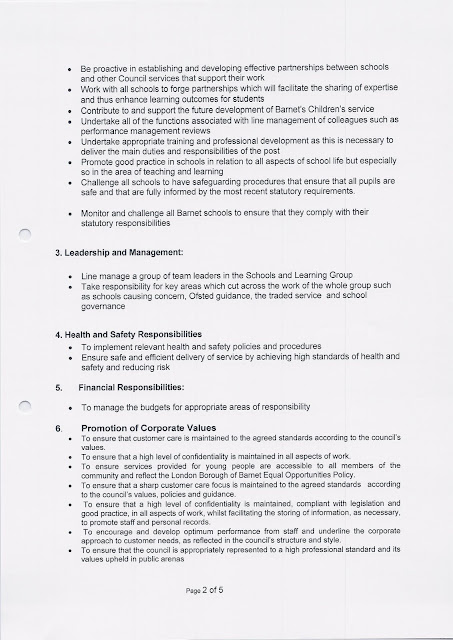 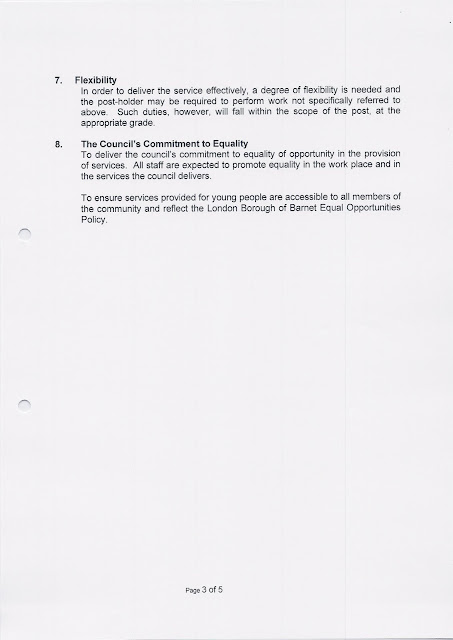 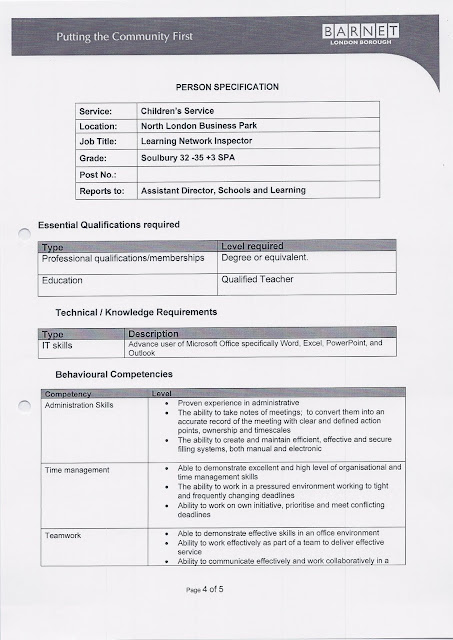 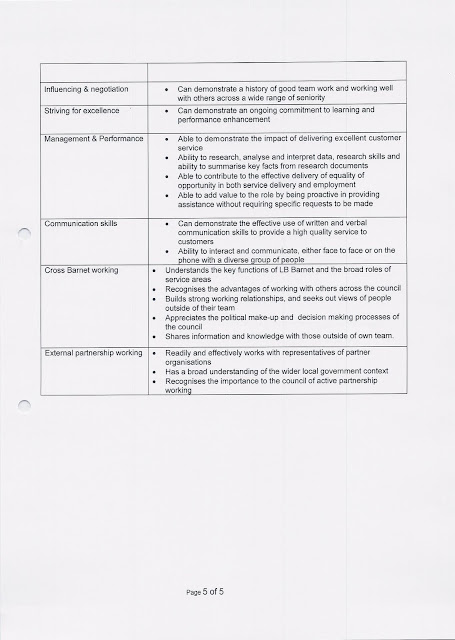 So coming back to the BPSI Barnet Headteachers' Residential Conference 2011 Mr Mustard asked the following under FOI:
How many non-teaching staff of Barnet Council will attend please?
What positions do they hold and what duties will they be carrying out at the Conference?
and the answer is:-
There will be six ‘non-teaching’ staff from Barnet Council attending the conference.
Assistant Director, Schools and Learning - Conference leader, networking with headteachers.
Four Learning Network Inspectors - Networking with headteachers.
Barnet Partnership for School Improvement (BPSI) Traded Service Manager - Conference organiser
The Director of the Children’s Service and the Chief Executive will visit the conference to make presentations and have a dialogue with headteachers but will not be attending the whole conference.
61 delegates ( headteachers ) had booked when Mr Mustard asked a little while ago.
Mr Mustard thinks that the networking would be more effective in the school buildings themselves as schools should be at the centre of the networking. But it isn't as sunny or sandy in the playground now is it? No spa, no bar, no luxury bedrooms, no gourmet food ( or have schools dinners improved since Mr Mustard went to school ? ) no sea view.
Do readers think that schools might also be an area which is over-managed? Don't the Headteachers earn enough to be good enough to be given some freedom to manage? No wonder so many schools want to become academies.
Yours frugally
Mr Mustard
Posted by Mr Mustard at 10:22 am