A council losing control ? how much blame to attribute to One Barnet ?

Mr Mustard is indebted to LGO Watcher for the information in this blog post. You can look at the LGO blog here.
The LGO posting will appear first followed by the Ombudsman's report on Barnet Council which is frightfully bad.

It's that time of year again in which councils receive their annual spin letters from the Local Government Ombudsman.

Local press all around the country are printing extracts from their council's letter with the misleading headline...NO MALADMINISTRATION. However, nothing could be further from the truth. It's all down to the use of a devious tactic I like to call statistical gymnastics.

This forces the council to publicise the fact that the ombudsman has found maladministration, which usually costs more than the settlement the ombudsman would have been happy with. Therefore, only a stupid council would turn down the ombudsman's offer to terminate a complaint if they pay the complainant a paltry amount of compensation. Which on average is less than £600.

A cheap and nasty pseudo system of administrative justice allows local government ombudsmen, councils and government to bury council wrongdoing and maladministration on the cheap, so it's a win, win, win situation for them.

The only losers are complainants who don't get the justice they deserve and of course the general public who are left in the dark about the true level of council wrongdoing and maladministration. 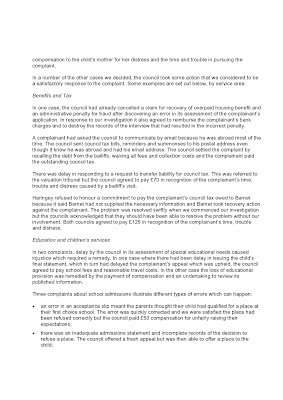 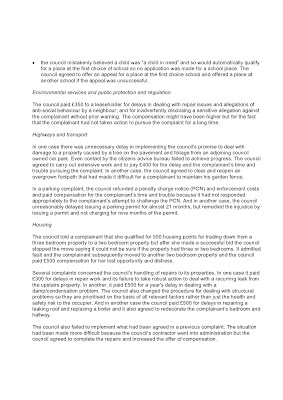 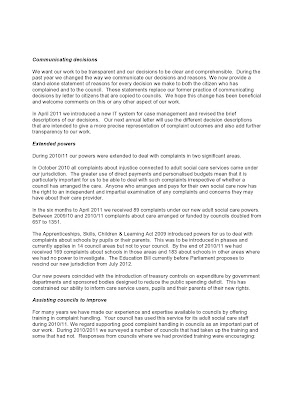 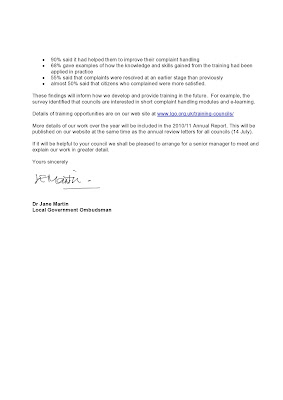 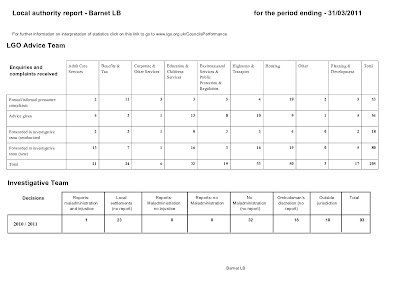 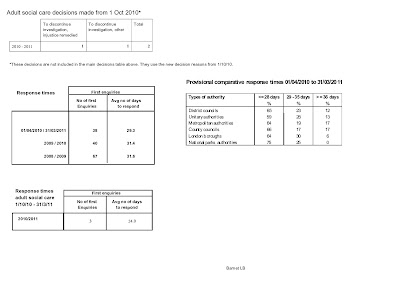 Mr Mustard is worried about this report. The Chief Executive "non-stick" Nick Walkley started as Chief Executive in March 2009 and so can be allowed the first year to settle in.
However the number of problems that were serious enough to report to the Local Government Ombudsman went up in the following year ( 2010/11 ) by over a third.
Housing continued to be the cause of most troubles and so Mr Mustard wonders why it is being let loose on a LATC ( Local Authority Trading Company ) Mr Reasonable has blogged about this here and Barnet Council's press release follows here:
New trading company set to provide greater choice
Barnet Council is to become one of the first local authorities in the country to establish a ‘trading company’ to help deliver adult social services.
Last night (24 May 2011) Cabinet Resources Committee agreed that the council should look to set up a Local Authority Trading Company (LATC) in conjunction with Barnet Homes.
The move is a key step as adults with disabilities are transferred to a system of direct payments which they can use to pay for their care.
These cash payments are intended to give residents greater choice and control over how their needs are met and where money is spent – but the system does not allow residents to buy the services they need directly from the council.
Once set up, the new trading company will provide a point from which to purchase those services.
In the process more people will benefit from greater choice and control over their care.
The LATC will be wholly owned by Barnet Council but will have its own board of directors and manage its own operations.
The staff who will run the new LATC will be drawn from both the council and Barnet Homes, the organisation responsible for managing the borough’s social housing stock.
In future, other local authorities or individuals outside the borough could approach the trading company to purchase services, helping generate income.
Cllr Sachin Rajput, Cabinet Member for Adults, said: “I appreciate that it may not be obvious to residents how this relates to them, but it is an important change to the way the council works and will make sure that we can continue to meet the needs of disabled people.
“This is about forging a new relationship with citizens by giving people greater control over the services they use.”
Tracey Lees, Barnet Homes’ Chief Executive, added: “I’m delighted that we could now have the opportunity to extend our expertise to support the delivery of adult social care services.
“We are determined to build on our success as a social landlord while offering excellent support to drive service quality and efficiency within adult social services.”
So that is the expertise that leads to your service being the one most reported to the LGO? Mr Mustard doesn't think that successful services spend their time batting off the LGO.
The following departments were notably worse:
Adult care services
Education
Children's Services
Highways
Transport
Now Mr Mustard doesn't know what management style the Chief Exec is using, but whatever it is it isn't working is one possible explanation for things getting worse.
Another is the paralysis caused by the huge number of consultants milling around North London Business Park which stops the real work from getting done.
One Barnet is a candidate for taking one's eye off the ball. Even President Obama is worried about it.
Only 80% of the staff being permanently filled might be another cause.
The threat of redundancy caused by the outsourcing programme will have caused some good people to leave for more secure positions.
This is what the Chief Executive said at the very start of his tenure.
I am pretty much restless about everything and want to make things better. It’s my trademark and why people find me really quite annoying at times.
You have had 2 years to make things better Mr Walkley. You haven't managed it and so maybe it's time to go somewhere else and annoy them instead of us.
Yours frugally
Mr Mustard
Posted by Mr Mustard at 4:26 pm

Email ThisBlogThis!Share to TwitterShare to FacebookShare to Pinterest
Labels: lgo, one barnet