On 25 March 2014, Mr Mustard received a rather nervous phone call from a disabled man in a bit of a panic, who Mr Mustard will call Mr K. He had the following letter. 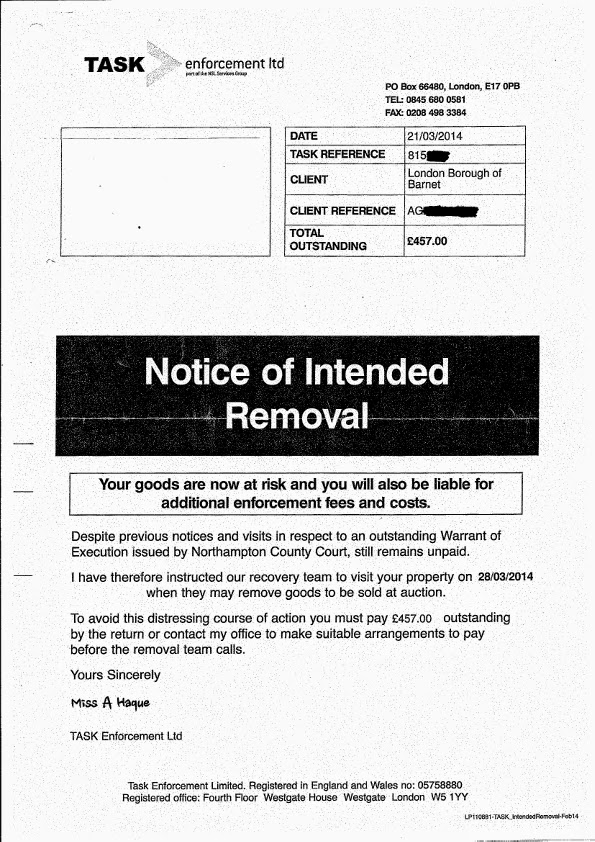 So Mr Mustard had a mere 3 days to stop the rot. This was a bit of a challenge. Mr K, being disabled, could not afford to lose his car which he needed to get to work.

On 26 March, Mr Mustard made a house call to Mr K. He looked at the site of the supposed offence and it wasn't correct. Mr K had parked in the same place as he had for years in a residents bay and had properly displayed his blue badge. The bay he was accused of parking in was a joint loading bay - free bay. The former had a single yellow line behind it and the joint bay had a double yellow line behind it. Looking at the council's photographs proved the contravention did not occur thanks to the single yellow line. When told that fact, the challenge, handled by an NSL employee on behalf of the council, was rejected. Amazing, awful, but not unusual, Mr Mustard thinks that Notice Processing Officers have money blindness.

In between the PCN being issue in October 13 and the bailiff letter, Mr K had moved. He had told the council early on although was a little slow updating the V5 (vehicle registration details - Mr Mustard advises you to tell DVLA of your new address for your vehicle and for your driving licence on the day after you move as that will save you loads of grief). The bailiff letter was sent to the old address. That meant that the warrant of execution (sounds pretty serious but not fatal) was invalid as it has to be reapplied for at the new address.

Fees claimed of £457 were excessive as although a visit had been made to the old address there was no point in the bailiff attending again as he was told that Mr K had moved and this could be confirmed by a database check or by asking the council. It was completely impossible even with 3 visits for the total amount due to reach that level. If a bailiff demands money you are entitled to a breakdown and to see the warrant. It is more transparent from now on as bailiff charges are being simplified.

Mr Mustard hastened back to his office and emailed the parking manager. They are on good terms and perfectly civil to each other even when they disagree.

Mr Mustard made the following 4 points:

1. Warrant invalid as to address.
2. Excessive fees demanded.
3. Contravention did not occur.
4. Council don't have a vulnerable individuals policy.

Less than 2 hours later the PCN was history and the matter had been added to the agenda for the next meeting with NSL. Of course, TASK are owned by the NSL group and clearly NSL PCN processing are not properly monitoring the behaviour of their in-house bailiff. NSL should be banned from using their own bailiff on the Barnet contract as there is a clear conflict of interest.

It was lucky for Mr K that he knew Helen Michael of Cafe Buzz (do go there when you are at Tally Ho, Finchley, N12 as the food is really rather good) and that she was able to introduce Mr Mustard to Mr K. Mr Mustard could see the stress that the bailiff's letters were causing and if Mr Mustard didn't have the knowledge that he does, and the ability to cut through the system, Mr K would have paid the £457 before that Friday, 28 March.

Instead he is making a donation to the North London Hospice. He is a peaceable law-abiding citizen who had done no wrong and did not deserve to be treated this way. Mr Mustard has yet to see a bailiff case that has been 100% correctly enforced. He doesn't yet see Barnet Council undertaking their duty of care to ensure that bailiffs follow the rules. They are lucky not to have featured on Panorama, the footage was in the can (but is now on the cutting room floor).

Mr Mustard
Posted by Mr Mustard at 7:18 am