A $chunting we will go

Yesterday, Mr  Mustard went $chunting and thought he should write about the experience. This children's rhyme came to mind.


$chunting, for those who don't know, is a contraction of $camera car hunting. It is very civilised and does not end up with the CEO driving the car being ripped to pieces by anyone although Mr Mustard was a little surprised by the number of passing motorists who aimed invective at the CEO who was quietly sat in his car.

The day dawned and Mr Mustard opened the curtains. Drat, he thought, it is wet and the new rear tyre on the yellow Aprilia will call for some cautious riding (motorcycle tyres are slippery when new and need 100 miles of scrubbing, preferably on a dry road). Mr Mustard was due at the secret rendez-vous at 9.30 but there aren't many yellow Aprilias about and even less pairs of white boots so he does stand out. Bald Eagle was the main man and although Mr Mustard was characteristically early Bald Eagle was late. Oh well, at least Bethnal Green Dude (should be Bloke but there was a misprint on his NoToMob jacket and BGB became BGD so he has been re-christened) was there early and bought the teas (thanks BGD). Bald Eagle turned up late (not unusual apparently, but he is allowed one bite so Mr Mustard isn't complaining) and so more tea was required. This $chunting lark looked easy so far. Bald Eagle's early morning had gone all wrong, he made the mistake of looking at his computer and they suck time out of you like a dementer out of Harry Potter and then his Cargo Net broke (not his hair net, the clue is in his name) and he had to turf everything out of the shed to find the spare.

So all tea'd up the 3 of us set off to the $camera car pen, in reality a deadly dull industrial estate. We sat around and waited for a $camera car to move which it did after a few false starts. We followed the car at a safe distance to its first honeypot which was the no left turn at Tufton Rd which probably exists to stop people cutting out the traffic lights. To monitor this no left turn the camera car made to stop on the right and realised he would have to park on a single yellow line and thought better of it with 3 motorcycles in high-viz jackets behind him as a photo of his bad parking would have appeared in a public place. So he moved off, went right and then did a u-turn on the front of a multi-storey car park which is probably what everybody does thus making the no-left turn a waste of time. We followed.

This is where we ended up. Waverley Avenue, E4. 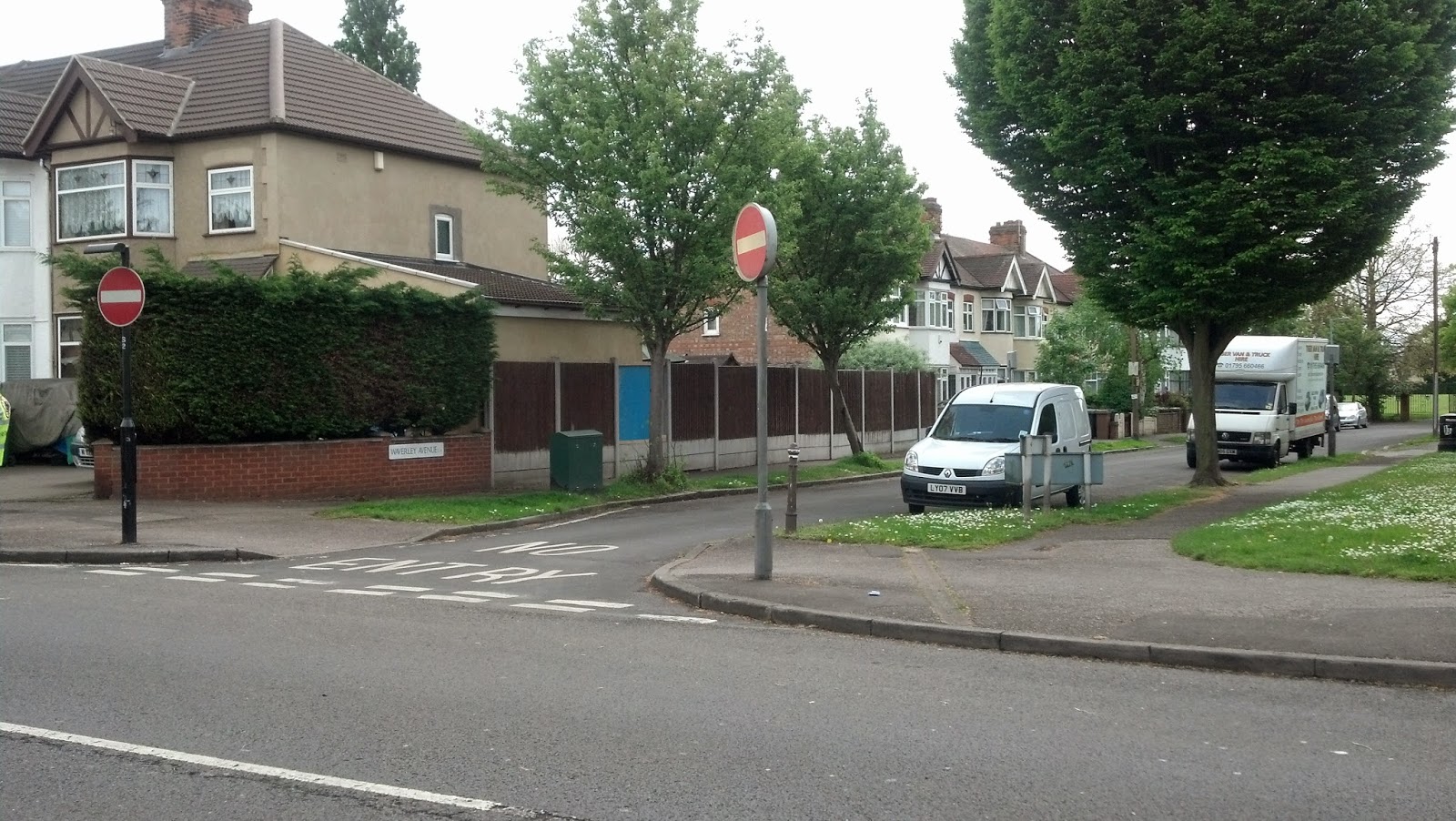 Note the bad angle of the right hand no entry sign which is illuminated but the left hand one isn't. If you were coming from the right as you look at the road you could easily miss the first sign. Nor are there warning signs showing no left turn / no right turn as you approach from the left or right. Apparently this no entry sign is often ignored in the rush hour but it was Saturday morning so very calm at times although heavily backed up at others. The $camera car parked bang opposite the junction (there are no parking restrictions there) and the driver settled back in his seat with nothing to do except wait for lunch.

We NoToMobbers (Mr Mustard has always been a supporter but is now a member) then held up signs warning people of the $camera car. Many motorists thought we were highlighting a speed trap (that would be illegal and we don't do it) and crawled past and others wound down their windows to ask for more information which was given and many toots of the horn, thumbs ups and smiles came our way. Some drivers hurled abuse at the driver, sat in this parked car, which is not deserved and NoToMobbers do not do that either, they talk politely to traffic wardens when the opportunity arises and if allowed. On this occasion the driver didn't even glance at us.

So we spent about 3 hours there and not a single car did so much as put an indicator on to suggest that they would commit a moving traffic offence. The sun came out and all was right with the world. The $camera car didn't make a bean. Local residents who stopped to chat said that the car is often at the no left turn we had come by earlier and that it was a waste of time to monitor this no-entry junction at this time.

It got to about 1.30 and we thought it must be time for the traffic warden to go back to the pen for his lunch so we make sure we all had our gloves and helmets on. Sure enough the Toyota IQ, for that is the nice little car that has the camera on a stalk through the roof, suddenly departed.

Now here is the part that shocked Mr Mustard about the $camera car. It was parked for the entire time with its engine running. Now it is only a small engine, 1000c.c., but even so, it apparently has to sit there with its engine running to power the camera and recording equipment. This is an ecological scandal and the council, are responsible for air quality. Here is their web page on the council website. Scroll down to the suggestions and what does it say

Don’t leave your engine running when you are parked.
except that Waltham Forest Council forget to add, except we will in order to make money out of motorists, and
We prefer pounds over pollution.

Waltham Forest Council, you are diabolical hypocrites and need to take all of your $camera cars off the road until you can use them without the engine running 24/7.

By this time CoCo had joined us (no he isn't a clown as if he was the wheels would probably fall off his motorcycle and that wouldn't do) and so the four of us followed the $camera car expecting it to go back to the depot. Instead he suddenly pulled up on a single yellow line (Mon - Sat 8am - 6.30pm) opposite the exit to no left turn hoping to bag at least one victim for his work. He thought we wouldn't be able to stop and observe except that we used the front of the multi-storey car park to stop on and one of us went round the block to the exit of the road the $camera car was monitoring. Mr Mustard took a photograph.

So having parked on an in-force single yellow line and forced all of the traffic out to the middle of the road the traffic warden thought better of it after a couple of minutes, did a u-turn (very good turning circle on the IQ) and ambled back to base with us following.

It was time for tea again and a toasted cheese sandwich after a hard morning's work doing what it is that many local authorities profess to want which is 100% compliance with all parking restrictions and rules of the road.
NoToMob people help maintain the law and slow down councils insatiable appetite for cash from parking. You can join them. You don't have to have a motorcycle although it helps. You can do this on foot or on a bicycle in the West End as you can't get a PCN and you could operate solely at the spots which are local to you. Find out all about it on the NoToMob website.

Mr Mustard, proud to be a NotToMobber.

Nearly forgot, here is one of this council's $camera cars showing us all how not to do it. Whoops.