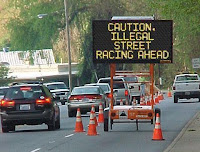 Following the judgment in the High Court that Barnet Council had been fund raising from CPZ residents contrary to the law, Mr Mustard thought he had better point out to the bean counters that the official Accounts of the council would need some adjustment. Let's see if they agree.

In the judgment of Mrs Justice Lang, DBE in the parking charges judicial review and in particular paragraph 64 of the judgment which says, inter alia, "the 1984 Act is not a fiscal measure and does not authorise the authority to use its powers to charge local residents for parking in order to raise surplus revenue .............the Defendant's purpose...was to generate additional income.......... This purpose was not authorised under the RTRA 1984 and therefore the decision was unlawful."


The judicial review was brought to challenge the increase in car permit charges in April 11 from £40 for a first car to £100 (and other charges for 2nd & 3rd cars) and the increase in Visitor Voucher cost from £1 to £4. These increases are clearly unlawful and I would expect the subject of this objection to have already been picked up by yourself and the council and a suitable provision made to refund the unlawfully gained income. I think that the Accounts for 2011/12 will also need to be reopened and provision made for a refund in that year also.


I require you to make a report in the public interest under section 8 of the Audit Commission Act 1998. A copy of this Notice of Objection has been sent to Mr C Naylor and to Cllr Monroe Palmer, Baron Palmer of Child's Hill, OBE, FCA. I look forward to hearing from you.