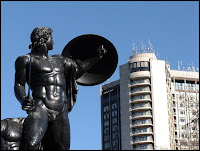 A report on the proceedings at the judicial review of the CPZ charges by Peter (added to by Mr Mustard for the final 97 minutes of proceedings), one of the supporters who has been there since the very first meeting in the lounge, kitchen, dining room, hall of a very full house in Summerlee Avenue back in 2011.

Court 22 is in the basement
Of the Royal Courts of Justice in the Strand,
We push past the Lewisham hospital placards
And wish them luck. We have our Whittington battle to come.

David looks cool. He fired the first slingshots
Over two years ago, but none have dented
The Barnet council Goliath, imperturbable
As our stones rattled off his hide.

Now it’ll be single combat in front of their suited armies.
And a judge. Mrs Justice Lang DBE.
Dark hair and suit, glasses,
Enlivened by a pair of crimson ribbons,
Enthroned beneath a gilded lion and unicorn.

Our barrister mumbles and bumbles,
As the judge leafs through her bundles
Searching for the two or three crucial pages
Wherein lies the kernel of the case.

Can they deliberately raise the parking charge
To create a surplus to use elsewhere?
That's the stone in David's sling.
The council says times is tough,
Capped government funding forced us.
June 09's proposal for modest increases
Was preempted the following year
By a cunning plan, a massive increase,
A coach and horses stampeding through the Act.

We wander to and fro through documents and sub-paragraphs
As the air grows heavy.
We see how the words blah blah entered the language.
Where's the one-page management summary
We used to have to give our Boards?
It's a different world in here.

(Whose hair goes into those wigs?)

Yes, I'm losing my way, as the barrister
Meanders down the back roads of the case,
Where signposts have gone missing,
And the judge struggles to follow
Its twists and turns in a labyrinth of hedges,
Which hide our destination from view.

Do they give barristers a course in document navigation?
Or even persuasion skills?
He drones on, his face buried in his bundles,
Leaving the judge struggling
To keep his tail-lights in view,
While David, eyes glued to his satnav,
Scuttles forward to keep him on track.

Two hours have gone. We're into emails:
Councillor Coleman's blunt assertions
That there is no other way
To plug our pothole-pitted roads,
And the hole in the Council's funds,
Without our money. David demurs.
Coleman cuffs him aside.
So here we are.

It's approaching one o'clock
When the judge begins to see for herself
The road opening out in front of her,
And, tired of the dawdling Morris Minor
With the barrister gripping its wheel,
Speeds past him. Goaded, at last
He finds the accelerator pedal, and -

And we find a lay by, and stop for lunch.

We reconvene, and turn to case law.
(What page are you on? She asks for the tenth time.)
It seems at first to buttress our case. But...

But we slow. There's a hold-up.
A paragraph in an earlier judgment
Is not entirely clear. It blocks our route.
It concerns whether a Council
Is entitled to set initial charges
Deliberately high to gain a surplus,
And if so what can it use it on?
Will there be a Catch 22 in Court 22?

The cars slow to a crawl, and stop.
The air fills with exhaust fumes.
I don't know about them,
But exhaustion is filling my vehicle.
We bypass this block,
Only to find another para in the way.
I think I'm going to pass out…

I pass out of the Court, and stumble into the Strand,
Where the traffic too is snarled up.
The barrister didn't snarl of course
but he did crawl through his skeleton argument
although best when he ad-libbed
and then the traffic turns and the council barrister
who has been a passenger all day awaiting his turn at the wheel
gets in the driving seat and tries to turn the judge around

the judge wasn't an idle passenger
nor was she deaf to the arguments
she had read her papers & remembered the facts
she rapped on the window between her and the driver
"the council had an ulterior motive", she said
"This was evidence of it"
thus hinting she had no plans to tear up David's licence to park

the council barrister tried to nudge the car forward through the crossroads
the judge was having none of it
you are driving here to ensure the expeditious, safe movement of traffic etc
not to simply turn up the meter
because you need new furniture at home
(traffic lights were the example given but not many homes have those)
Are your charges legitimate

and the barrister tried to nudge his car forward
his wallet was empty
can we go full belt down council tax street
or via SPA alley
or a little of both?

the judge was banging (in a ladylike manner)
on the window again
was raising revenue the only consideration?
and then the dreaded words were uttered
Equality Impact Assessment
no-one wanted to spend too long in that corner of town

and then the barrister was showing the judge some
miscellaneous sites of interest
and one was a citing of Brian Coleman
whose emails will come back to bite the council
on the bottom, possibly
and let us move the vehicle swiftly on
as terrible images form in the rear view mirror

and with the clock on the dash showing 4.09
the council barrister took his hands off the wheel
satisfied with his day's work
neither Rumpole nor Rumpled
and he had earnt many times more than the
average professional driver would make that day

and so David's driver had 21 minutes in which
to reach his target
although whether he got there or not
will only be known when the judge decides if
the target was the correct one to which she wanted to be taken.

and so the vehicle continued on its journey
with the driver, like an opinionated taxi driver
saying that the last man to share his cab
had gone completely the wrong way
he had no knowledge at all
just a barrack room lawyer really
although he was impeccably polite
when insulting his legal knowledge

as soon as judgment is delivered you will hear about it on here.

Thank you to Peter for keeping much better notes than the 10 pages of notes of legal argument that Mr Mustard scribbled down. Thank you also to David Attfield for putting his neck on the block and risking £50,000 of his own money (largely raised by supporters and we will raise more if needs be) who told David that he had saved Mr Mustard from having to start this battle in 2011 and that, as a qualified lawyer, he had done a much better job than Mr M. would have done and Mr M. is in enough other battles already.

Mr Mustard
Posted by Mr Mustard at 9:26 am