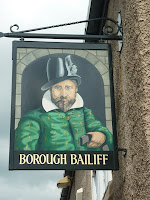 If you have a garage put your car in it. Why? The bailiff cannot clamp a car inside a locked garage. The reason to be cautious is that Barnet Council have, quite improperly, awoken a number of parking tickets from 2010 and 2011 which should have been abandoned due to the passage of time and one of them could be your's. The Code of Practice on Civil Parking and Traffic Enforcement issued by London Councils says, at para 170e, that a PCN should be cancelled "where there has been an undue delay at any stage in processing of the PCN".

Ergo, PCN from 2010 and 2011 which have not proceeded past the Notice to Owner stage should be cancelled.

Mr Mustard is dealing with a case from July 2011 which first came to the attention of the motorist when his car was clamped on his drive in June 2013.

He did not see the PCN (sometimes the traffic warden plays a game and removes the PCN after taking the photographs or a member of the public may do so or if it is raining when you get in and the wipers remove it)
He did not get the NtO perhaps because the council had recorded his address wrongly
He did not get a charge certificate, probably due to the address error
He did not get an Order for Recovery.

The bailiff charged £11.20 for an initial letter which did not arrive.

The first notification of a 2 year old PCN was a wheel clamp attached to his car by a bailiff when the motorist was out at work. The bailiff then left so this is an abandoned levy in the opinion of Mr Mustard and made illegal the removal of the car the following day. The vehicle was a luxury motor worth much more than the PCN value of £172 (£110 + 50% + £7) and so was also an over levy. A warrant issued to the wrong address is not valid either! A complaint is with the bailiff's firm and another will follow later to the County Court which issued the bailiff's licence.

Mr Mustard has clearly told the council of their wrong-doing but they don't seem to be treating the stealing of a car as an urgent matter even though Mr Mustard has bent the ear of the Leader of the Council, who said he would get it sorted, and a Parking Manager four days later who hadn't heard anything from the Leader (Mr Mustard taking time out from his French motorcycling trip to make the phone call). Mr Mustard feels sure Richard Cornelius would be unhappy if Mr Mustard popped down to Totteridge and clamped Richard's car until his client's car is returned. 3am is a popular time for clamping.

If you don't get the Notice to Owner, or for similar specified procedural errors, there is a procedure in which you file forms TE7 & TE9 by email with the Northampton Traffic Enforcement Centre and then the council get 19 days to decide what to do about your parking ticket. This is a long time during which the life of an innocent motorist is totally messed up without his wheels.

Mr Mustard has heard of another case involving a 75 year old man who appealed against his parking ticket in the proper way and the next thing he heard was the bailiff turning up. Fuller details are awaited.

Mr Mustard knows that there were 6,000 cases older than December 2011 which the council were wrongly looking to bring back to life. 500 of those were being progressed first in October 2012 to "see what type of response received" and Mr Mustard is concerned that more of you are going to receive a surprising and unwelcome visit from a bailiff. Don't open the door to anyone you don't know; you do not have to let the bailiff in whatever the bailiff might tell you to the contrary. Do send an email to mrmustard@zoho.com if this happens to you. Do not pay £800 to a bailiff if you have done nothing wrong; together we can fight injustice.