Mr Mustard didn't go to the Appeal Court because his fits of coughing would have disrupted proceedings.

He also fears, when he reads the next passage, which has been clearly stolen borrowed from Mrs Angry's Broken Barnet blog that if he had been caught unawares in Court with this "evidence" he would have had to be carried out of the Court in a state of helpless mirth.


We were now treated to the contents of a letter by Mr Andrew Travers, the acting Chief Executive of Barnet Council.

We were informed that he was greatly concerned about the morale of staff. Not as you might imagine from the perspective of those employees about to lose their jobs as a result of privatisation, but because of the delay in the loss of those jobs, and the uncertainty, thoughtlessly caused by those bringing this legal challenge. If you are being led to the guillotine, you want to get your head on the chopping block as soon as possible, of course, rather than pray for rescue.

Staff were leaving, due to low morale, we heard. We did not hear that staff might be leaving so as to be sure of employment, and security for their families.

So naturally once the Court case was over Andrew's thoughts turned to the staff and how he should boost their low morale and how he could make their job more enjoyable, easier, more helpful to the public and make people want to stay etc etc. Here is what he actually sent out. 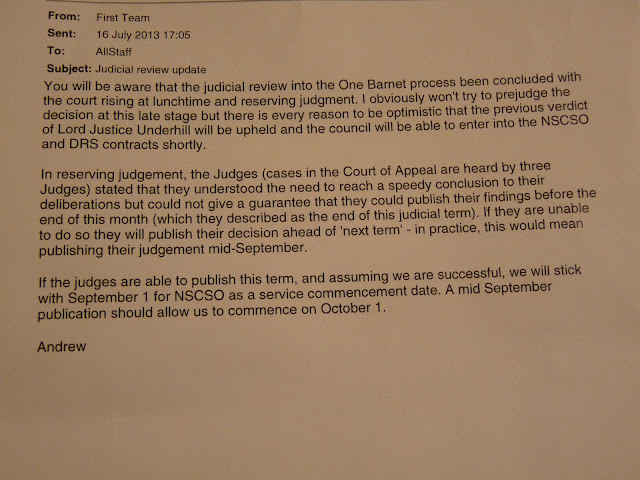 Please help Mr Mustard out and tell him which part of this email shows any concern at all for the staff. It appears to be an email sent by a pure bean-counter who is solely concerned by the privatisation timetable (and the consequent knock-on effects on the budget) and shows an unseemly haste to sign a contract.