The following email although addressed to Cllr Robert Rams was sent to all 63 councilllors:

I have seen your letter (above) in the Barnet Times in which you claim that the "Council has acted responsibly" a self-delusional title with which I profoundly disagree.

Your letter is mostly a pathetic party political point scoring exercise which is unattractive and irrelevant ( as Labour are not in control of the town hall so all that currently matters is the lash-up that you and your colleagues are making of running the council ) and is based upon the spurious notion that Capita are some sort of generous benefactor who are pumping money into Barnet out of the goodness of their hearts. The money being spent on IT is not a gift from Capita, nor is it an investment, it is simply the routine procurement of more modern computers and systems ( hopefully no more of the hated and inefficient tablets ) and as ever there isn't a comprehensive breakdown in the business case although there is a claimed "investment" of £17.5m of which only £7m is clearly identifiable as being on IT as the table from the business case shows: 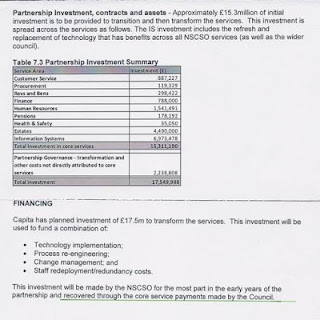 So where are you getting the money to update the IT system?
Oh, it's from Capita who are providing the funding.

Will they want their money back or is it a gift?
Capita will be repaid through the "core service payments made by the council."


Your criticism that Labour would borrow £13.5m and so they cannot be trusted with taxpayers' money is thus worthless drivel as you plan to borrow even more money.
I can see someone whose word cannot be trusted and it isn't Cllr Alan Schneiderman of Labour, is it Robert? It is you.
I don't expect to hear any member of the Cabinet ever again say that Capita have invested £millions in the council IT as if it is a benevolent gesture. It isn't. Capita have simply made a commercial decision to give the council credit. Is interest being paid?
I am not, and never have been, a member of the Labour Party.