It is the season of goodwill and so Mr Mustard is going to give Cllr Robert Rams's blog a little extra publicity today. Robert likes to be in the public eye except that it is usually the eye of the storm he finds himself in.

Here are some of the words which Mr Mustard has cut-and-pasted from Robert's blog post of 7 June 2011:

As I said recently .............. the Library Review was never going to be universally popular. This is despite the extra £10,000 per year we will spend on books,................Under our strategy, Friern Barnet library will move, and merge with the North Finchley library. All the services currently provided at the Friern Barnet site will be provided at the artsdepot. The library at the artsdepot will be one of our largest; it will be a landmark library that specialises in the arts. It will hold more stock, have longer opening hours, will open on Sundays, and have extra study space and facilities.

Ah yes, the Artsdepot. It will not be "one of our largest", it will not be "a landmark library", it will hold zero stock not "more stock", it will not "open on Sundays" it won't have any library "facilities". Perhaps Robert needs to go back and correct that entry on his blog and delete all the incorrect statements which will make for an interesting post, just white space.

Now Mr Mustard was interested in the spending on books in libraries but as the FOI department have got the hump with him, and deem every simple little request that he makes to be vexatious, he had to get a friend to ask the question. She received an answer in 16 days and luckily Mr Mustard has lots of friends who are happy to ask questions on his behalf. 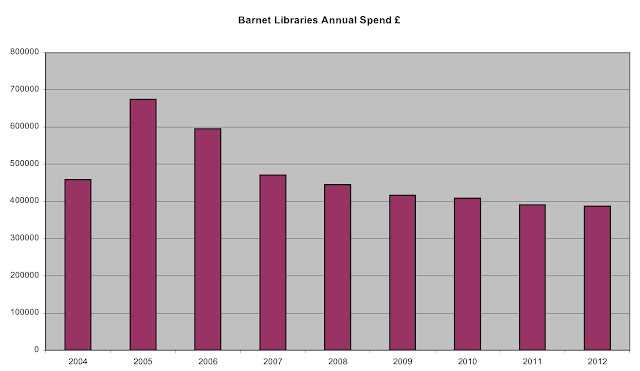 Will extra spend arrive in 2012/13? It probably will now as Robert will read this post and have to go off and bother senior officers to make sure it happens as an FOI question will be asked after the year has ended. The clear evidence though is that spending on books has been reduced year on year since 2005.

Anything that Robert Rams says has to be taken with a large pinch of salt. It seems that his Cabinet colleagues might agree as here are 2 of them, from a year ago, checking if they have enough salt in stock to cope with all the imaginary landmark library utterances, or something like that. 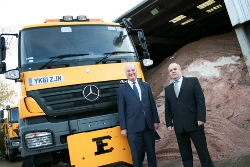 Have a Happy Christmas readers and go easy on the salt as it really isn't good for your health to have too much of it.