NEPP - compounding their error by being late 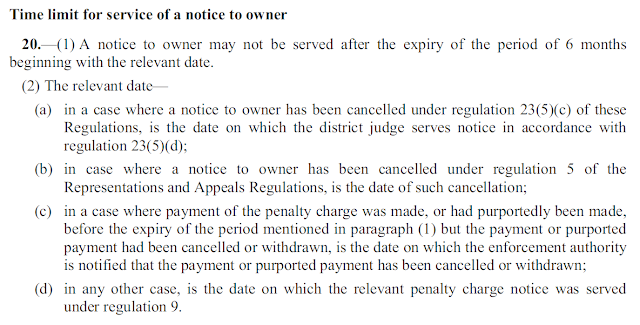 Above are the time limits for sending a Notice to Owner in a regulation 9 (served on street) parking PCN situation. This post relates to the third PCN in the previous blog post, a PCN that shouldn't have existed in the first place.

Sub-para 'a' refers to a situation whereby a witness statement has been filed as a document went missing or another defined set of circumstances had taken place.

Sub-para 'b' refers to a situation as a hire vehicle or a vehicle sale such that it is perfectly reasonable to issue a fresh Notice to Owner.

Sub-para 'c' relates to payments which have been made and perhaps allocated incorrectly.

None of a, b or c applied in this case, thus 'd' applied. The time limit for serving a Notice to owner was 6 months.

Following a complaint which Mr Mustard made about processing in this case which had reached the charge certificate stage NEPP thought they could send a second Notice to Owner and so they did do just that. NEPP now say it wasn't a real Notice to Owner but a copy Notice to Owner (which Mr Mustard hadn't requested) and instead of bearing Mr Mustard's address (he having given that address as good for service on the registered keeper) it should have had the previous address on it, the one from which Mr C had moved. 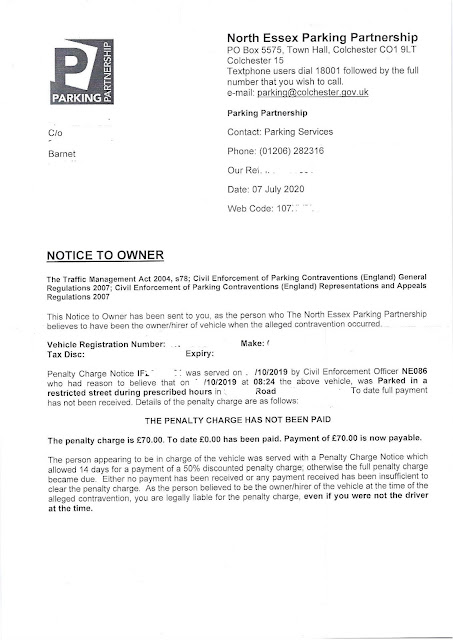 Mr Mustard didn't know it (supposedly) was a copy of a document so he made representations. On that day, 17 July 2020, Mr Mustard was in Manchester having got that far from Land's End. He was in the hotel whose bar and restaurant were closed due to an overabundance of Covid safety measures and was enjoying his dinner from ASDA which contained a large element of red wine. It would have been foolish of Mr Mustard to have ignored the Notice to Owner as it looked and felt like a Notice to Owner and ignoring time limited statutory documents leads to hell.

The representations which Mr Mustard made were simple, the Notice to Owner was out of time. On 14 August he received a Notice of Acceptance although the council cancelled on the grounds of discretion. It would be much better if they simply accepted they were wrong, three times wrong in this case.

1    The PCN was not valid as there was no new contravention, just a continuous one which a penalty had been paid for.

2    The Notice to owner was a nullity as it was served out of time.

3    The duty on the enforcement authority (acting by its useless agent NEPP) is to consider the representations which are made and decide if it accepts them or not. They didn't get a mention in the Notice of Acceptance so it amounted to a procedural impropriety.

Had Mr C not had the benefit of representation by Mr Mustard he would have ended up paying all three PCNs.