Spaced out at Dart Charge 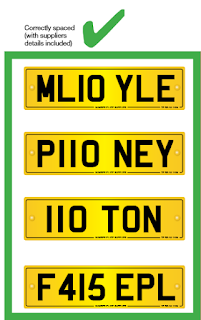 Mr Mustard's friend Bella has a personal numberplate, which she inherited and decided to keep and use.

A couple of years ago she received a PCN from Dart Charge for not paying to cross. As she has had an auto pay account for years that was a bit miffing. She phoned Dart Charge at the time, they were polite and helpful, which to be fair they usually are, and they squashed the wrong charge and put her registration on a (long) list of vehicles which have to be personally checked.

Oh dear, it went wrong again last week. Bella duly phoned up Dart Charge, keeping Mr Mustard in reserve in case the big guns were needed, and the unhelpful man at Dart Charge tried to blame her for having a space in the numberplate as that caused problems for their cameras. Everyone knows that ANPR cameras have their faults but with the supposed personal check as well the PCN should not have been generated.

The plate was properly spaced, it was fitted by the garage, a main dealer, to her new car when she purchased it and much like 110 TON above, an image taken from a police advert about how the spacing should look (it is defined to the millimetre in BS AU145e) Bella's two numeric three alpha plate has the correct spacing between the two sets of data and that is how the plate will remain. Let's see how long it is before the next blunder, hopefully never.

Even though you know the PCN is wrong you must deal with it or legally you become guilty by default. A terrible system.

If you do receive a Dart Charge PCN because you had never heard of the Dartford Crossing you will often find that if you phone them up (0300 300 0120) the helpful people there (as long as you don't get Mr Spaced Out) will let you pay the £2.50 (or whatever) crossing fee and cancel the first PCN. That is decent of Dart Charge as the aim is improved compliance not revenue rising after all.