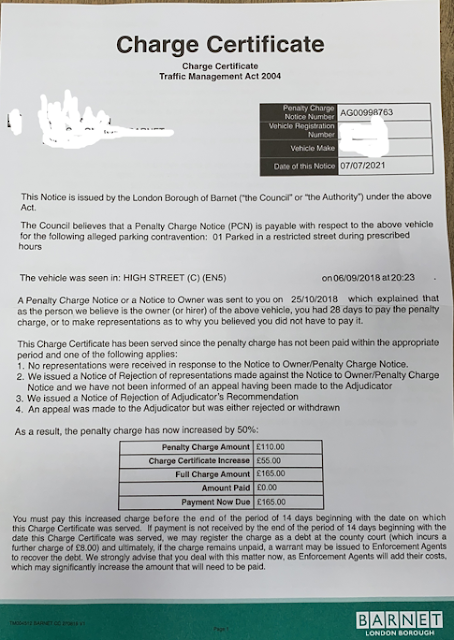 Mr Mustard sees quite a few Charge Certificates but not normally if over two years ago Barnet Council wrote to him to cancel the PCN. That is a bit odd and very worring for the recipient. 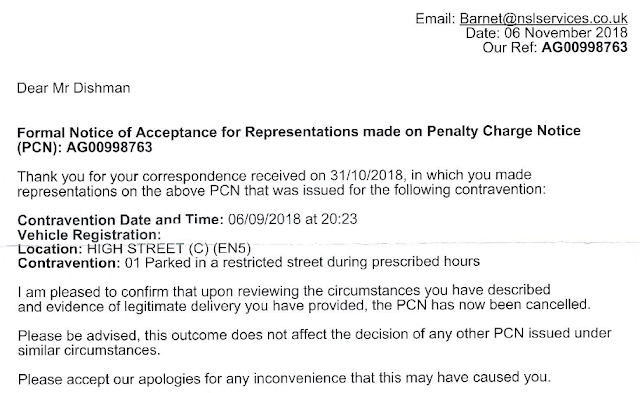 Mr Mustard tried a PCN enquiry to check the status which returned this answer which means either a typing error was made (Mr Mustard didn't) or the PCN is over. 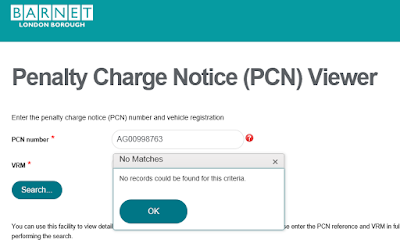 Finally he tried to pay the PCN as if the PCN was cancelled you do get told in that screen. Mr Mustard thinks you should be given that information if you do an enquiry in order to avoid uncertainty and as the council keep the data on file for years, they just hide if from you, the person who the data is about.

So what has happened? A gargantuan cockup that's for sure although what and how Mr Mustard can't work out as this PCN shouldn't be able to have a Charge Certificate printed when we know the balance is zero. The balance within the PCN software though is probably calculated by taking the full PCN balance and subtracting any discount that is due and any payments made and then adding any charge certificate uplift or court registration fees. There should be a flag that says if the PCN is completed or not and somehow somewhere it has gone wrong.

It can't be the case that only one PCN has gone wrong which happens to be for a person represented by Mr Mustard as he only touches about 0.01% of the PCNs issued in a year.

Mr Mustard will find out.

Here is the council's explanation. Management are to be commended to almost always responding to Mr Mustard's enquiries within 24 hours.

I have looked into this PCN and can advise that it is closed and no enforcement action had been taken on these cases since 20/12/2018, when a Notice of Acceptance had been issued . It was noted that an action was undertaken on the 06/07/2021 to clear up our case records, which inadvertently re opened the case and issued a Charge Certificate and would like to apologise for this. I can confirm that this notice was immediately cancelled and should not have been posted. This has been raised with the relevant supervisor to look into as a matter of priority.

I noted that you had asked how many incorrect documents have been issued and what has been done about them in the way of sending follow up letters telling the recipients that the erroneous document should be ignored as it has been reversed. This matter is currently being looked into and a letter should be sent to any identified customers that had been affected by this matter, to advise that no action should be taken and that their penalty is closed.

I hope that this information has been of help to you and would like to reassure you that no further action is being taken regarding this penalty.