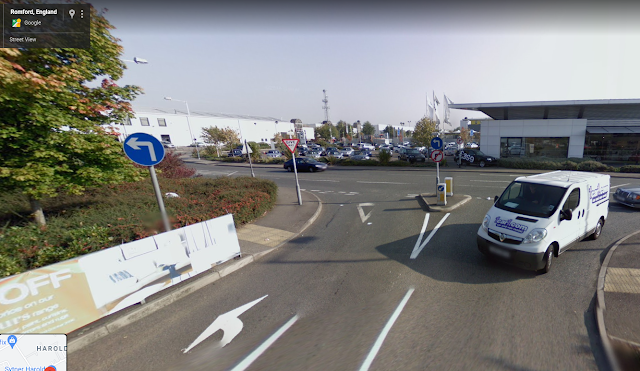 Lots of people arrive out of the blue and ask for Mr Mustard's help which he usually gives (although when he is busy with proper paid work he limits his help to the mentally & physically ill, the poverty stricken and when the council has blundered). It is his own fault for spouting off all over the internet that he receives c.200 requests a year. It is always nice though for Mr Mustard to know where his new requests originated and be told that the person met Jane at a dinner party and she said that Mr Mustard might be able to help. Sometimes it isn't like that. 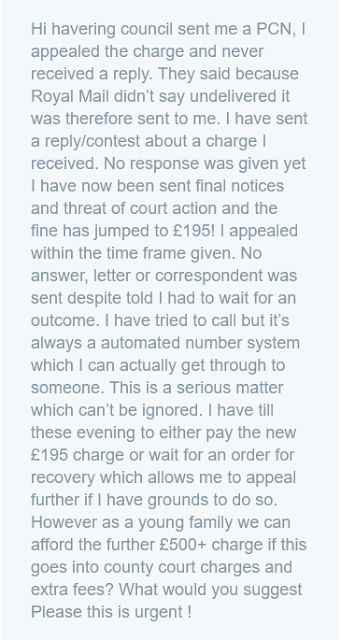 Mr Mustard responded pretty quickly as even though it was the end of his working day he had just received a same day deadline and time is critical in the world of PCNs although not, as it happens, in this case, as you can safely ignore a charge certificate if you plan to, and have grounds to, file a Statutory Declaration (or witness statement for a parking case) when the Order for Recovery arrives.

What was useful was that all the council documents were supplied so Mr Mustard had most of the picture. This was at 7.20pm and Mr Mustard had got up off the sofa where he was reading a good book to make sure the matter was clear in the mind of the requestor, let's call them Mr I, by midnight.

So you ask an expert and then ask him if he knows what he is doing? You can feel the panic. Partly that was brought about by Havering sending an extra document designed to induce panic which isn't part of the statutory process and only gives you bad news, no explanation of what actions are possible, this is procedurally unfair and not becoming of a public body. Mr Mustard would have lodged a complaint but the matter got taken out his his hands before he could.
Five minutes later Mr Mustard asked for a little extra information

I fight 200 PCNs a year so just trust me. Can I see your representations please.

Then he sent his advice at 19:47 as seeing the challenge wasn't vital as Mr Mustard could see, as you can from the photo above, that there really isn't any excuse for failing to turn left.

A prompt rely about the challenge which was made was received, at 19:51, although it wasn't much use. Please always write out what you are going to write on the online system and save it in a word document or photograph the screen as you go along.

Then at 19:54 Mr I, who is in a corner, wants to turn back the clock to a time when he could have paid 50% before we are anywhere near through the set procedure that a motorist must follow. Mr Mustard replied at 20:00 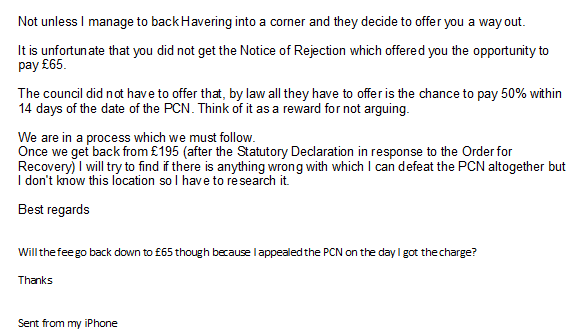 At 20:05 Mr Mustard decided to ask for the missing page of the PCN, in case it contained an error, he was looking ahead to later, once the opportunity to make an Appeal arose.

All went quiet. Two days later, on 18 June, Mr Mustard decided to check the balance on line on the council computer as it is a good way of knowing from the balance if the next statutory document has been issued.

Finding the balance was zero Mr Mustard asked Mr I what had happened just in case the PCN has been resolved by other means, such as asking a local councillor for help, which information isn't always volunteered. 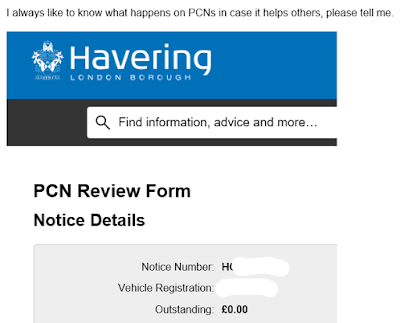 Mr Mustard also has a personal life and from 21 to 25 June he was on a bicycle headed to Broadstairs and back. All his paperwork is in the cloud and he takes a small laptop with him wherever he goes so that he can finish what he started. Nothing in the way of a reply came during that period. Mr Mustard also keeps a paper file on each PCN and doesn't usually scan and shred them until the PCN is finished which includes knowing the outcome as he keeps a spreadsheet of his results and Mr Mustard records the failures as well as the successes.

On 30 June Mr Mustard sent another email to find out what the outcome had been.

So it looks like Mr I paid up when Mr Mustard could have got the PCN back to £130 and possibly zero. Although the driving was poor the non-standard bullying letter which Havering Council sent needs to be stopped and a complaint from Mr Mustard might have made the council moderate their behaviour and decide to not pursue the PCN in all the circumstances. Whatever you think of the driving every motorist has the right (if in time) to take a PCN to Appeal and if it does contain a fatal procedural wording, have it cancelled. The Appeal would have included that Havering Council are not following the statutory procedure and are also overstating their powers. We'll never know how that Appeal would have turned out.

Having got this case off his chest, Mr Mustard feels a lot better.

Please only ask for Mr Mustard's help if you are going to listen to his advice or tell him why he is legally wrong and not going to take 2 hours of his life before capitulating.