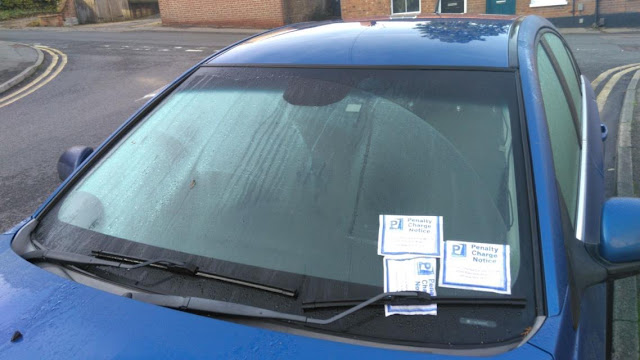 The motorist made an error and had his rear wheel on double yellows. One PCN is perfectly acceptable in the circumstances but three is extortionate. It didn't make for a good weekend.

Clearly the motorist, let us call him Mr C, didn't see his car as otherwise he would have moved it after the first PCN.
There is no excuse for the traffic wardens, the second and third of whom should not have issued a PCN having seen their colleagues work affixed to the windscreen. It is no wonder that the public think that traffic wardens get paid for issuing more tickets when meritless illegal PCNs are given out.
Just so you know NEPP is the North Essex Parking Partnership which operates on behalf of Colchester Borough Counci, Braintree, Epping Forest, Harlow, Tendring & Uttlesford councils. They should be experts in PCN issue and processing. They aren't.
Mr Mustard advised Mr C to pay the first PCN in time at 50% and challenge the other two on these grounds.
As you did not move the car there was one continuous contravention so only one PCN is due.

Usually another PCN is not issued until 24 hours after the previous one.
Both of these representations were rejected. NEPP were wrong to do so. It's as if all they are interested in is money.
The PCNs ended up being processed at different speeds. This is what NEPP said later
Saturday PCN
Formal Representation received on 14th January.
Accepted on 13th February on grounds that this was served within 24 hours of the initial PCN
Sunday PCN
The third would not automatically be cancelled for being the same contravention, as it was not within 24 hours.
Mr Mustard had rather expected NEPP to cancel both the second and third PCNs as each one was issued less than 24 hours before the previous one (although there is no magic about a 24 hour period in this case) but they fooled him by saying that PCNs 1 and 3 were more than 24 hours apart but that is to ignore the fact that only one contravention had occurred.
Later on, Mr Mustard made both a complaint and out of time representations which led to a cancellation, as follows.

It is true that the vehicle was parked in contravention but a penalty charge notice had already been served, and a second one illegally served, so this third PCN was not correctly served.
Discretion isn't in it. They should know at NEPP that they are in the wrong.
The final paragraph is empty puff and weak, 'may' be held liable, no, as only one PCN can be served for one contravention.
Cancelling a PCN makes NEPP want to have the last word but that is churlish behaviour when they are in the wrong.
If a council had to pay a motorist the value of an illegal PCN they might be less trigger happy when issuing.
Yours frugally
Mr Mustard
Posted by Mr Mustard at 4:19 pm