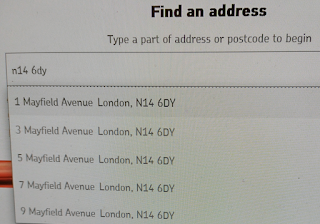 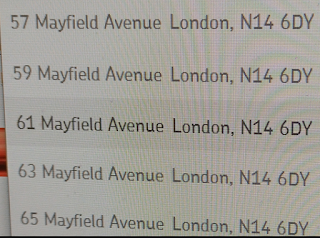 The unfortunate resident of Mayfield Avenue, who will will call Mr R, who came to Mr Mustard for help, had unfortunately driven past a 'flying motorbike' sign three times in late 2020, and back again, so clocked up six PCNs on his leased vehicle. He had received six administration charges from the vehicle supplier and knew to expect six PCNs from the council. He received only five which Mr Mustard challenged at the tribunal. Two were cancelled and three were upheld so they were paid. Mr Mustard knew that sometimes a PCN gets cancelled rather than passed on to the vehicle user and so he didn't worry about the one missing PCN, Mr Mustard doesn't rock the boat in case he falls into the water.

The reason why the sixth PCN didn't reach Mr R, became apparent when he received the Charge Certificate, sent because he hadn't responded to the PCN that he hadn't received. Here, minus the name, is the document in question.

Mr Mustard spotted the omission of a street number. Perhaps the regular postman was on duty that day and knew which number, out of the 33 choices, Mr R lived at but on the delivery day for the PCN it got sent off to Belfast where poorly addressed mail gets dealt with by the Royal Mail. Whatever the reason Mr R is indebted to his postman for the dedication to delivery.

Mr Mustard went online to send Enfield Council a message as you can't phone them which would be much quicker in this sort of situation.

A possible third reason to cancel was that half the signs had been defaced.

Mr Mustard rather thought that having been told of their lack of street number error Enfield Council would cancel the PCN (they were too late to issue a new correct one). He was wrong. 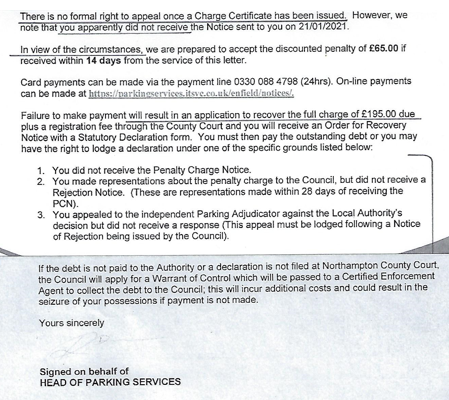 A number of points arose. An enforcement authority has a wide discretion to consider representations (they don't mean 'Appeal' that is the tribunal stage) made out of time (although given the lack of service no right to make representations had actually arisen).

The issue of a charge certificate doesn't, in and of itself, stop the council from exercising their discretion to cancel a PCN which they issued and hold the fate of in their hands. It isn't the issue of a charge certificate which counts but the service of one. We were lucky this one was served as otherwise it would probably have been the bailiff that Mr R first heard from.

The right to serve a charge certificate only arises if and when a PCN has been served, in this case Mr R said he did not receive it and if he had he would have fought it at the tribunal is the logical thought.

Mr R was incensed that the council wrote 'apparently' not received. His word rebutted the presumption of service unless the council could prove he was lying. In addition, the balance of probabilities is that a piece of mail sent without an address may well not get properly delivered. Furthermore a PCN which is not properly addressed is not a valid PCN.

The council's power to register the PCN as a debt at the County Court (Traffic Enforcement Centre) is a discretionary one and subject to the approval of the Court which should not be assumed as being granted without demur and charge certificates shouldn't be issued automatically but when the council thinks one is appropriate (they are of course issued automatically, as night follows day). When registering debts an officer of the council has to certify that they have served a Charge Certificate. Given that the PCN was not served they cannot properly certify that they have served a (valid) charge certificate and so should not have threatened this step.

The council know that steps 2. and 3. are not applicable so why confuse the motorist by suggesting them? Mr R can't be expected to know PCN procedure as well as Mr Mustard does and is entitled to be treated fairly by Enfield Council, he wasn't being.

Before Mr R had received the above letter Mr Mustard saw on line that the balance had reverted to £65 so emailed the parking manager as this was an unusual case.

In a separate email Mr Mustard asked for a copy of the complete case report in case it noted down the return of the undelivered PCN. Instead he got sent copies only of the statutory documents. He then emailed the manager again saying he hadn't got what he asked for and could it be sent. Today he checked the balance on line again and saw it was now £0.00 and then this letter came in the post.

Finally a sensible decision had been taken. The moment the council became aware, as Mr Mustard told them, that the PCN was inadequately addressed they should have cancelled it.

They seem to regard PCNs as sacrosanct once issued and this is a defective way of thinking which needs to be eliminated. You do wrong and get a penalty for £130, the council get it wrong and they want a penalty from you of £65 or £195 if you don't agree.

Mr Mustard thinks that 99% of motorists would have paid up when Enfield Council wrongly threatened them with the County Court. Sadly their illegal bullying doesn't have any costs consequences, it should.