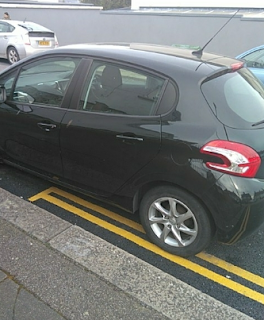 When this car was parked there had been snowfall and the double yellow lines weren't visible. The snow soon melted away and traffic wardens did the opposite, they appeared 6 times in two weeks and stuck 6 PCNs on the windscreen.
The car had been rented out and inadvertently left this way by the hirer and so the vehicle owner paid the first PCN and asked Mr Mustard to challenge the other five. Both the owner and Mr Mustard knew that only one contravention had occurred, albeit of two weeks duration, and thus only on penalty was due. They both expected Brent Council to fold their hand at the first opportunity. Wrong! A clear and concise informal challenge was made:

The response was in the negative but notable by its absence was any indication that the concept of continuous contravention had been considered: 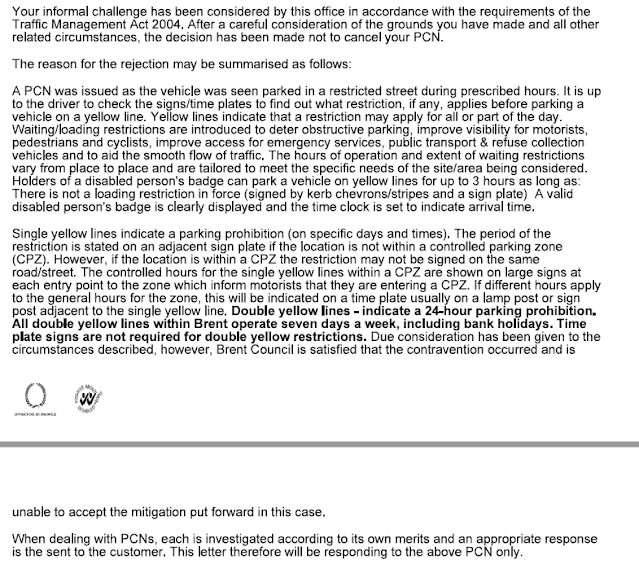 Mitigation was not argued, it was a head on assault on the validity of the PCN.

The owner sat and waited for the Notices to Owner and then formal representations were made:

Tribunal decisions aren't precedents but are 'legally persuasive' and are likely to be correct when it comes to points of law (decisions on other facts may turn on the circumstances) and Brent Council should consider at the very least if the decision is likely to be followed by another adjudicator, or not. As it happens Mr Mustard has a sheaf of similar decisions so was confident in the eventual outcome. A copy of the decision was sent to Brent Council so that it was in front of them. 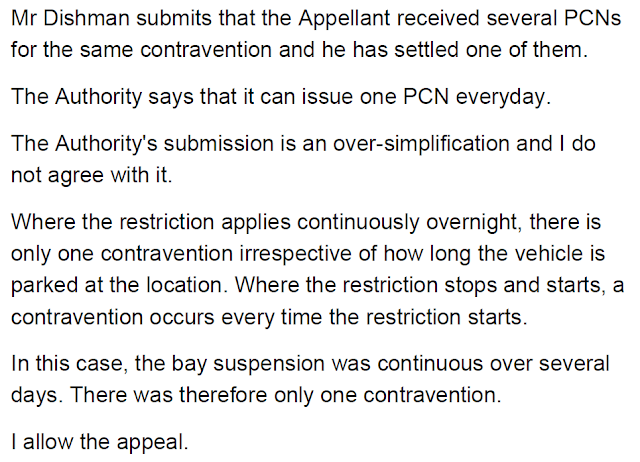 There were two pages of standard rejection guff and Mr Mustard has extract all that goes anywhere near actually answering the argument.

There was no argument raised about liability resting with the hirer as hire is done by an App so there isn't a written hire agreement thus ruling out transfer of liability. That was a red herring that Brent Council introduced and then refused.

Perhaps if the council hadn't dealt with each PCN individually they might have realised that there was only one contravention. To say the tribunal decision had 'no bearing' is a gross dereliction of the council to consider (i.e. think about a little bit) the representations which have been made not to say they are irrelevant. The other PCNs weren't ones that Mr Mustard or his client had received, they were for a different party entirely.

Needless to say, Appeals to the independent adjudicator at London Tribunals were made. The Grounds were that there had been one continuous contravention. The first PCN of six had been paid, which settled any liability in full and Brent Council had cancelled the final PCN without saying why apart from some error had occurred. When Brent Council put their evidence it was disclosed that they cancelled the final PCN because it was issued less than 24 hours after the fifth one so clearly they thought they could issue one PCN a day (or 24 hour & 1 minute period) but didn't actually say so. It only took a few minutes with the Adjudicator to get him out of the snow and away from the hire agreement question (in fact Mr Mustard dealt with 6 PCNs for 3 motorists in 14 minutes of phone call) for him to decide that only one contravention had occurred and cancel these four PCNs. 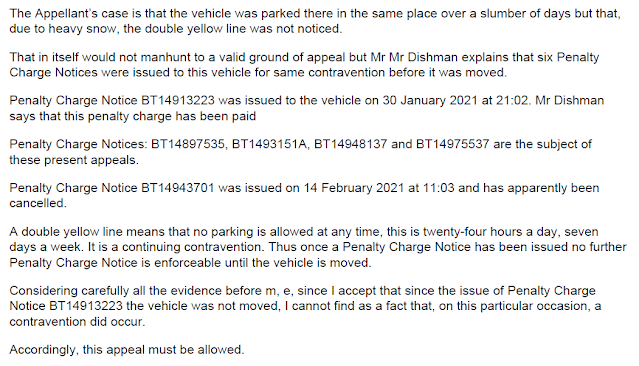 Auto-correct rather changed the flow of the decision.
'Number' became 'slumber' but a slumber of parking isn't all that wrong in this case.
'Amount' became 'manhunt', which Brent Council have been on, wanting 4 times £110 that wasn't due.

What worries Mr Mustard is that the principle of a continuous (or continuing) contravention isn't a new one, it is as old as double yellow lines (or PCNs on them). Either Brent Council don't know what they are doing or they think that they can pull the wool over the eyes of Mr Mustard which is a rare event. The worrying aspect is that the motorist in person would believe Brent Council and/or they are too frightened / too busy / too worried because of a health scare or whatever to spare the time and/or mental energy to fight through the three rounds of the battle (Mr Mustard is battle hardened and somehow has an almost unlimited capacity for argument) and would gift Brent Council a windfall £440.

It is an assumption that a council will be procedurally fair, not all of them are and Brent Council featured in the previous blog displaying a different ignorance of the law.

In this case £55 was paid for the first PCN and Brent Council have had to pay out c. £120 in fees to the tribunal which they won't see again so they made a nett loss of £75. One hopes that they will learn something from this public humiliation but don't hold your breath, there are too many £millions at stake.