Having written about Brent Council yesterday on the subject of a continuous contravention it just so happens when Mr Mustard was idling through the daily register of adjudicator decisions at London Tribunals that he alighted on a similar case, six PCNs given to a Mr Anthony Aneke (with whom Mr Mustard has no connection & whom he will refer to as Mr A) the identical number of PCNs given to a vehicle which again didn't move. The register is, by legal regulation, a public document and it can provide a useful source of information.

Here is the substance of the decision:

Each PCN was for £110 and so Hillingdon Council were trying to get a decision that Mr A should fork out £660. Hillingdon increased their council tax by 4.8% this year and so are clearly in great need of extra funds - this may partly explain why they want six penalty charges to be paid for one contravention.

There is no dispute but that Mr A made a mistake, a common one as it happens of trying to be mindful of other road users but overlooking inconvenience to pedestrians and wheelchair uses, prams etc. It isn't therefore unreasonable to extract one penalty from him but trying for six, when they aren't legally due, is hostile behaviour. Add in the facts that the vehicle had a mechanical problem, that he has just lost his job and that he fell ill and Hillingdon Council's behaviour is hostile, horrible, heartless, disproportionate, unreasonable and devoid of any morality and would lead to a debt burden. That isn't why councils exist, to make the lives of citizens more difficult. 'Welcome to Hillingdon' the entry signs should read, 'where we like to kick a man when he is down'.

Councils now tend to take the view that because a contravention has occurred a penalty must be paid, they decline to exercise their wide discretion in obviously deserving cases and throw their weight about like playground bullies. There needs to be objective and independent oversight to rein in their worst excesses. The role of the adjudicator is to apply the law but we need more than this as they only see 1% of all PCNs, someone sensible needs to look at the other 99% and keep local authorities on the straight and narrow.

What is the point of Penalty Charge Notices? The Secretary of State, in his statutory guidance, says, in part, that it is this:

In the case of Mr A the PCNs have been looked at in isolation, his personal financial and health situation having been ignored, and revenue raising is the apparent objective as Mr Mustard doesn't see any other possible explanation (well, not knowing the law at Hillingdon Council is an unattractive alternative).

Taking it as a given that the whole point of parking rules is to regulate parking, is there a better alternative to PCNs as almost 4 million a year being issued in London (for parking alone) suggests to Mr Mustard that they don't work? There is, clearly Mr A hadn't caught on that pavement parking is forbidden throughout Greater London except where the pavements are signed to allow it.

One option is to issue a warning PCN, which has a zero value, and then the message should get through, but councils issue very few such PCNs as they cost them money and they don't like them affecting their profit margins.

An alternative when a challenge is received for this type of PCN is to ask Mr A to sign an undertaking as to his future conduct and then cancelling the PCNs, something like this: 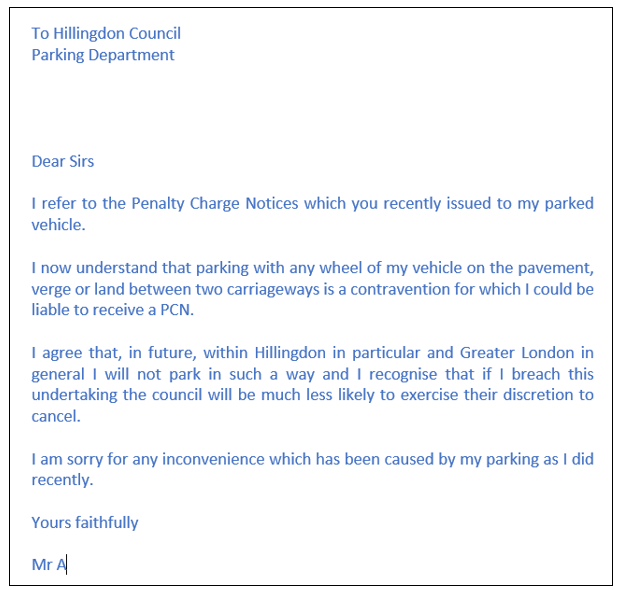 By this method, compliance would slowly improve, and the allegation of revenue raising could not be made.

Until something changes Mr Mustard will continue to bring to your attention the egregious activities of certain councils.