Dropping a clanger - in Brent and Barnet

'Dropped kerb' is the colloquial term for a place where the path (or verge) has been lowered to meet the carriageway. There are three types of dropped kerb which can be enforced under the provisions of Section 86 of the Traffic Management Act 2004

The second option (b) is usually found at junctions so pedestrians don't have to step up and down (you might think it applies to a speed table but Mr Mustard seems to recall an adjudication decision which found it didn't as the primary purpose of that was to slow traffic).

So that is clear as clear can be, yes?

Apparently, despite 17 years in which to learn the law, Brent Council and Barnet Council don't understand it, to the detriment of the motorist and to the advantage of council coffers.

A lovely picture of this short dropped kerb in Hilltop Avenue, Brent. From this we can glean that the dropped kerb is to a bin store and there isn't a matching dropped kerb on the other side of the carriageway.

A traffic warden can only issue a PCN when he has a belief that a contravention has occurred, clearly he/she cannot properly hold that belief in this case. The motorist knew the law and quoted it to Brent Council at the informal and formal stages and Mr Mustard quoted it at the Appeal to an independent adjudicator stage.

Brent's responses were worthy of Yes Minister and would be funny if money was not at risk and also quoted an out of date law.

So three times Brent Council got it wrong, and so simple. How many times have they done this? The Adjudication took just a few minutes on the telephone, with the adjudicator cancelling the PCN and saying this:

Oh dear, being reminded that the role of the local authority is to apply the law and only just escaping an order for costs as the bar is set very high.

Barnet Council weren't quite as bad, but not far short.

They issued a dropped kerb PCN at this location in Derby Avenue N12: 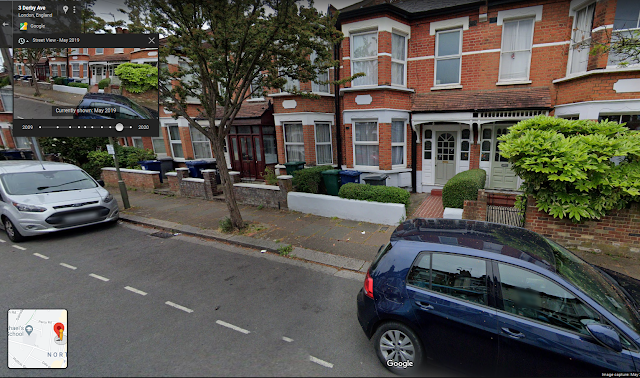 Looking at the three scenarios in which a PCN can be issued:

For pedestrians to cross the road - clearly not in the middle of a parking bay and no dropped kerb opposite.

Cyclists - no cycle lane there.

Private drive - no and never was so very off why the drop is there in the first place.

It was bonkers of the traffic warden to issue a PCN at that location in the first place.

The informal challenge referred to a tribunal decision which set out the law:

I attach tribunal decision 2120539093 which sets out the 3 categories of dropped kerb which the council is entitled to enforce.

The dropped kerb in question is not within those categories so the council does not have the legal right to issue the PCN.

That challenge was rejected:

The council didn't carefully consider anything.

The council quote the wrong Act although the wording of it didn't change much and then in the next paragraph quote the correct Act although rather unhelpfully not that it was section 86.

The law doesn't cover 'any' dropped kerb as if it did there would be no need to set out three categories of dropped kerb which can legally be enforced.

It is true that tribunal decisions aren't precedents but they are 'legally persuasive' and Adjudicators are experienced lawyers who consider these cases all day and tend to get the law correct 99.9% of the time.

The parking didn't contravene any regulations.

Curiously the identical representations were made at the second opportunity, in response to the Notice to Owner, and they were accepted. The Notice of acceptance contained a standard line which is nonsense:

'Please note that this does not set a precedent for any PCN issued under similar circumstances'. By 'similar' Mr Mustard reads, 'in the same place' as otherwise it makes no sense, which it doesn't anyway. Of course it sets a precedent, the PCN was wrong and every other one issued at that location in Derby Avenue, outside #16, is a nullity due to having no legal foundation.

So, on two dropped kerb cases on which Mr Mustard has been the advisor in the last month, two separate councils, with different contractors, got it plain wrong both on the ground and in the comfort and safety of their offices. Mr Mustard finds it hard to believe that he has been in some statistical freak show and found the only two occasions when Brent & Barnet councils have right royally lashed up.

Don't let it happen to you.