School zig zags - do your 3 point turn somewhere else 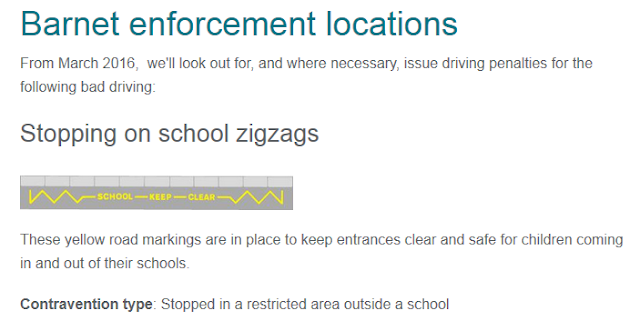 The above is the council's justification for school zig zags which have in the main been largely respected by the driving public with only 475 PCN having been issued up until May 17.

Mr Mustard wonders why a location, such as at the school in St Joseph's Grove in Hendon (right behind the town hall as it happens) therefore has restricted hours of 8.30am to 4.30pm whereas other schools have 2 or 3 sets of times, corresponding to the likely arrival and leaving times and possibly lunch times for a secondary school if lots of children are likely to be heading out of school. He can't see a need for a restriction at 11am for example.

Mr Mustard's client was unlucky. He was driving along and then realised he needed to go the other way, he pulled up on the zig zags to use the adjoining piece of road to reverse into and at that very moment another car came along and made it dangerous to continue with the manoeuvre so he waited, which made his stop a few seconds long and then the computer controlled cctv nabbed him. You can watch it here

Mr Mustard didn't think that was cricket so yesterday he wrote to parking management as follows, and he eagerly awaits their reply:

If you watch the cctv the car stops in order to reverse into the side turning and then go the other way. This is a perfectly reasonable manoeuvre but one which your camera picked up and then presumably a human being authorised the issue of a PCN. It is necessary to stop in order to reverse direction and normally it would be for a trivial time (de minimis) but in this case the driver very considerately stopped to avoid an accident as a car was approaching and then he reversed a few seconds later.

I agree that technically the vehicle stopped and that is a contravention but it is not the mischief that the zig zags are aimed at, which is parents/guardians/etc dropping off or collecting their children. There isn't a child in the cctv anywhere. I question the need for all day enforcement.

I think this is an unfair PCN and accordingly should be cancelled.

They might or they might not cancel, we'll see. If not, an adjudicator will get to decide the matter later on.

You, dear reader, will learn from this though, won't you?