So here is Marina's car just after it has been clamped by the bailiff. This is private property for which a permit is required so the bailiff is trespassing, not attractive to break the law whilst trying to enforce it? Sadly the warden for the private parking company did not happen along.

Now it is the case that Marina did, due to some personal events in her life, fail to fully contest a PCN from Brent Council at Bodiam Way which people are always getting wrong. This is the spot.

Mr Mustard would probably have beaten the PCN but that is academic now, you become guilty by default if you miss a deadline.

Mr Mustard visited Marina on 3 June to discuss something else. He saw that the blue badge was on display in her car. He told her to always leave the blue badge on display and she said it always was. This is why, it makes the car exempt goods which a bailiff cannot take.

So after the bailiff James Alexander March had clamped the car Mr Mustard emailed his office, the firm of Newlyn, as he didn't have the bailiff's mobile. This is what he wrote.

Mr Mustard thought that quite quickly Newlyn would realise the game was up and remove the clamp, but no, this is part of their response.

Mr March has confirmed that as the vehicle was parked in a disabled bay he checked the vehicle to see if a Blue Badge was present, which it was not.

Flip, thought Mr Mustard the bailiff cannot see, as there is a blue blob in the windscreen which could well be a blue badge and the associated clock, the very ones which were there when he himself saw the car earlier in the month.

The bailiff came back to the premises on 23 June at which time he had a second opportunity to see the blue badge. No, he still can't see it apparently, as the clamp remained on the car.

Today Mr Mustard popped to have a look at the clamp for himself, and has taken a video. If the bailiff returns now he cannot fail to see the blue badge, if he can see and if he looks and once he sees it he must unclamp the car, but will he?


Solicitors have now been instructed and doubtless the parking manager of the London Borough of Brent will have to decide whether there is a blue badge in the car or not and instruct his bailiff accordingly. It is the council who are responsible for the actions of their bailiff (in a similar case a couple of years ago at Barnet the clamp was removed as soon as Mr Mustard brought the matter to the attention of management but Brent are, in Mr Mustard's experience, and based upon certain staff he has come across, slippery). It isn't denied that there is a debt but you can't ignore the law as a bailiff and use the existence of a debt as justification. Bailiffs have got draconian powers, they must use them lawfully.

Mr Mustard doesn't really think the bailiff is physically blind, but he is being wilfully blind.

Mr Mustard likes to fix problems before they are problems, by disposing of the PCN before it can be given to a bailiff. He doesn't have the time to deal with bailiffs as well as everything else and believes that prevention is better than cure.

The best place for bailiff advice is either your local free law centre or http://bailiffadviceonline.co.uk/

Update 27 June some time after 9am

Next step is, probably, a complaint to Brent Council as they are responsible for their bailiff's action.

Here is the bailiff's car as he removed the clamp. He is parked on private land which is for residents with permits only. He is a trespasser. 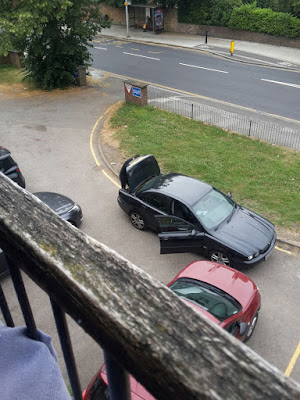