Barnet - the council that likes to say 'No' 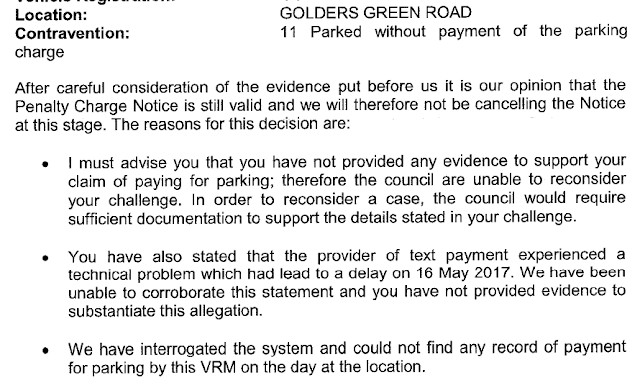 Mr Mustard didn't provide any evidence? How odd, as here is the challenge he sent in. 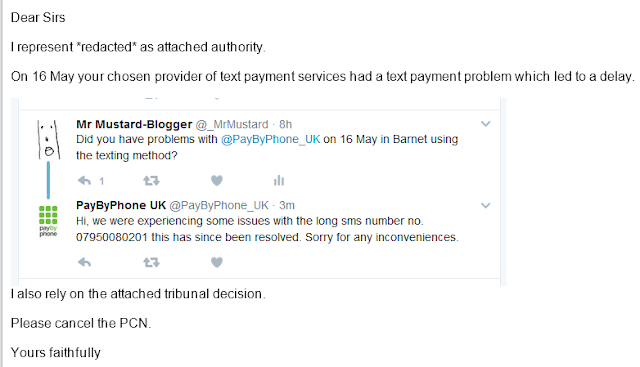 That seems pretty conclusive evidence to Mr Mustard, the supplier of the PayByPhone service says there was a problem with texting that day. The council are unable to corroborate this statement, perhaps because they haven't tried to? or maybe they just don't want to as then they would have to think seriously about cancelling the PCN. It makes Mr Mustard wonder about all the times that the council say that there were no reported problems with the PayByPhone system, that might be because there is no system to report such problems to the council from their supplier.

Here is an extract of the tribunal decision on which Mr Mustard will claim the persuasive support (as it doesn't set a binding precedent). 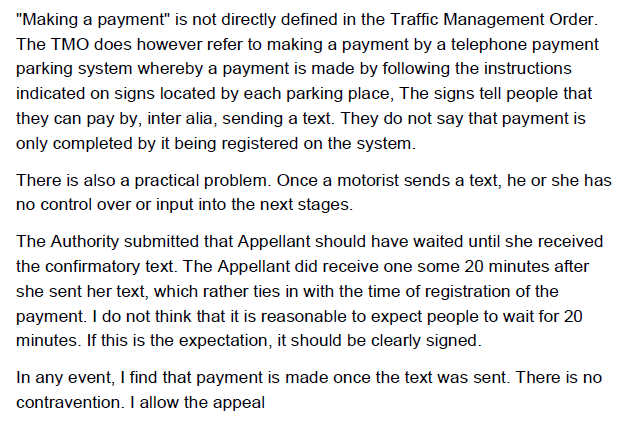 Mr Mustard's client's payment went through 2 days later, which is why she doesn't show as having paid on the day in question. Mr Mustard doesn't think it reasonable that Barnet Council expect her to have waited in her car until she got the confirmatory text.

What peevs Mr Mustard is that the council can write such blatant rubbish in response to clear, evidenced arguments. Barnet Council have a general duty at law to be procedurally fair and Mr Mustard can't see how they have been in this case. Had his client been representing herself she might easily have accepted the council's opinion as gospel and paid up the 50% to avoid going to the tribunal, writing two further challenges and then attending at the Chancery Lane hearing centre. Mr Mustard has a block booking at the adjudication centre so one more case (on top of the 7 he has on his next appearance) is no big deal.

Mr Mustard suspects however, that this case won't be going anywhere near an adjudicator as his next email is to the parking manager with a complaint that his representations are not being properly considered, they are being rejected for nonsensical reasons. Mr Mustard doesn't think he will be amused at yet another trashing of the council's image. The rejection was probably written by an employee of NSL but at the behest of a council 'officer' (staff member).

Well that didn't take long. If you complain to the correct person, the parking Manager (poor lad), and have a point, he sorts it out fast.

Oops, there is a contact with NSL Ltd not NSL Services Ltd; service was certainly missing!
Posted by Mr Mustard at 9:45 am