Barnet Council: No, No, Yes 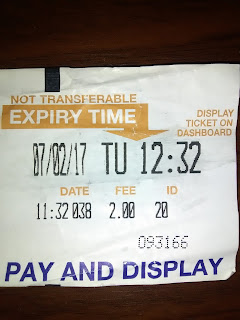 Mr Mustard's client, Mr K, was given a PCN for being 'Parked without payment of the parking charge' which wasn't the case, he had paid but he hadn't got around to displaying when he got waylaid in the street to discuss a pressing matter of business. It might seem pedantic to challenge such a PCN but that is only giving the council some of its own medicine. Had the PCN been for 'Failing to pay & display' then Mr K would have been well advised to pay up at 50%.

So it was that Mr Mustard made the informal challenge in February 17 and sent in a copy of the above payment receipt and pointed out that the contravention, as alleged, had not taken place so the PCN should please be cancelled.

The reply was only 10 days in coming:

Not the most accurate of replies. Firstly, the bay clearly wasn't for people paying to park by phone or even for people paying by phone to park as otherwise there wouldn't be parking meters issuing receipts. Secondly, Mr Mustard sent a copy of the receipt for parking to support his argument as he knows how councils don't believe anything unless you send them proof.

Mr Mustard told his client to calmly await the Notice to Owner as he knew he was using a winning argument, it was just a question of time. In early April the said Notice arrived. The same day Mr Mustard made the identical challenge to the one he had made in February. Just over a month later (a little slower than usual to respond) a Notice of Rejection reached Mr K. It said:

This was a second act of wilful blindness as Mr Mustard's copy of his formal representations contained an image of the receipt for paying which was 7cm high. Oh well, tribunal time said Mr Mustard.

Mr Mustard duly filed an Appeal at London Tribunals at the end of May. The Grounds of Appeal were that 'The contravention did not occur'. As soon as the Appeal was filed a charge is raised to cover the costs of running the tribunal of c.£30. Last Friday Mr K received a letter saying that Barnet Council would not be opposing the Appeal and thus the PCN is cancelled. These are Mr K's words:

What I don't understand is why they insist on going through the whole rejection route when they must know that they are going to fail.

Mr Mustard knows the answer to that. It is that apathy sets in and/or people believe that the council will be correct, bizarrely even when they are wrong. The public don't understand that you can make the same challenge 3 times, once when you get the PCN on your car, once when you get the Notice to Owner, and a third time when you go to the tribunal. In fact, presenting the same argument three times plays well with adjudicators who see an unchanging argument which is more likely to be true than that you were loading, then you were unloading and then you were dropping off your granny - that is the way to lose.

Mr Mustard knows the system and never runs out of steam. If you are going to fight a PCN prepare yourself to make the same argument three times, stick to the timetable and lodge your Notice of Appeal with London Tribunals (you can do it in 5 minutes on line now) and sometimes, maybe once in every 6 or 7 Appeals, the council will throw in the towel rather than waste the 2 or 3 hours that is necessary to produce all the evidence for the tribunal.

Email ThisBlogThis!Share to TwitterShare to FacebookShare to Pinterest
Labels: pay and display