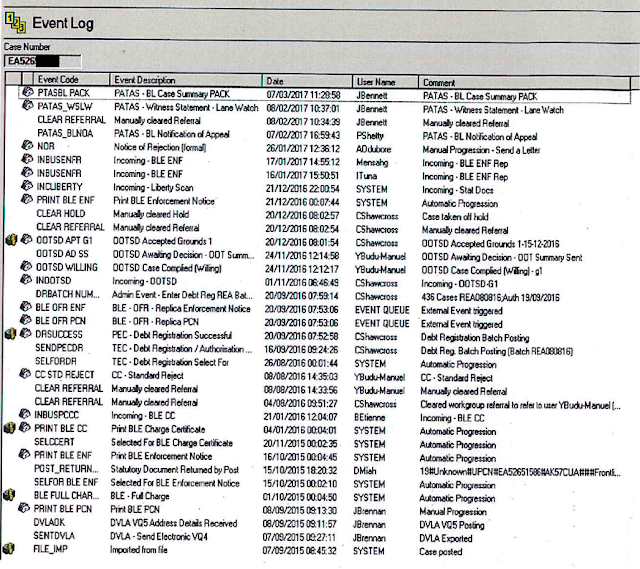 The above image is Ealing Council's reverse date order log of all events for one PCN. If you look at the seventh line from the bottom you will see that it is a statutory document which has been returned. The only document issued at that stage was a postal PCN for a bus lane contravention. That should signal a pause in the process whilst the council establishes why the document came back (somewhere between the DVLA and Ealing Council the address got mangled, it was correctly recorded at DVLA). Did it stop the process? did it hell as like. The very next day the council issued the Enforcement Notice (not to be confused with a Notice of Enforcement) which is the bus lane equivalent of a parking Notice to Owner. From 15 October onwards every action taken by Ealing Council was ultra vires, 'beyond their powers', or just plain illegal to you and me, as well as immoral but council parking departments are often a moral free zone. 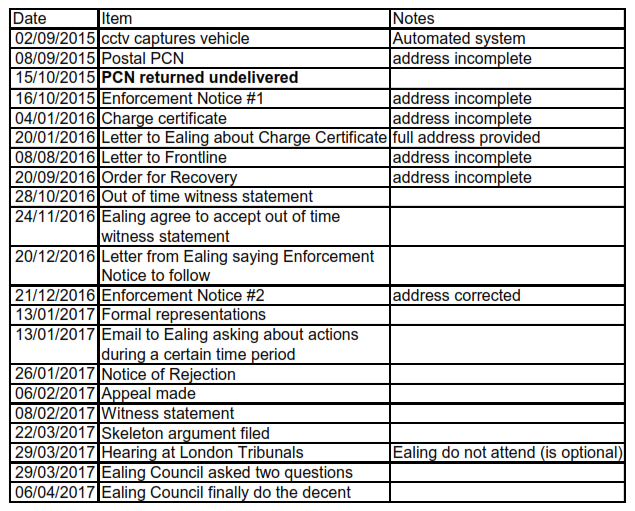 Following the filing of a witness statement, the council get the chance to reconsider their position and cancel, the smart choice, or to refer the matter to the tribunal. They chose the latter and then got hit with one of Mr Mustard's skeleton arguments, the type of argument which a certain adjudicator has said looks nothing like a skeleton, it being more than bare bones: 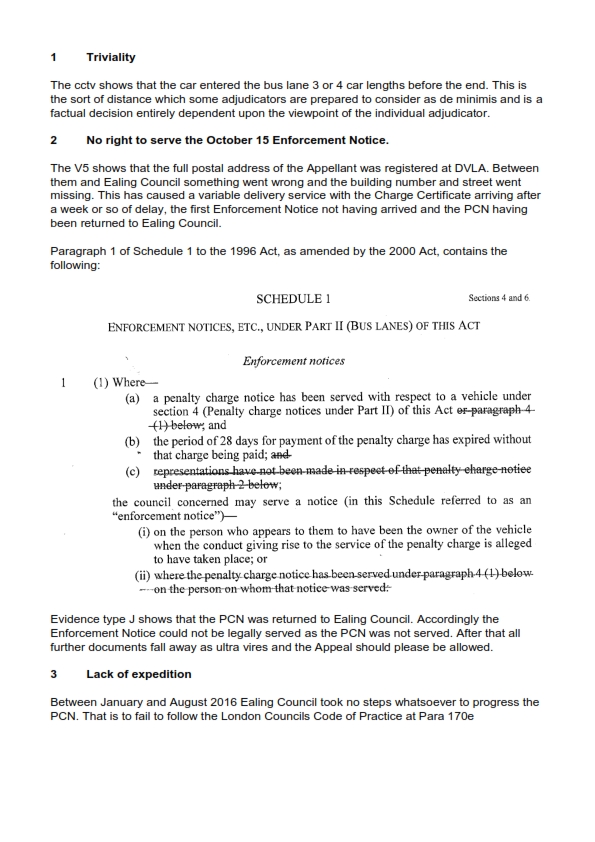 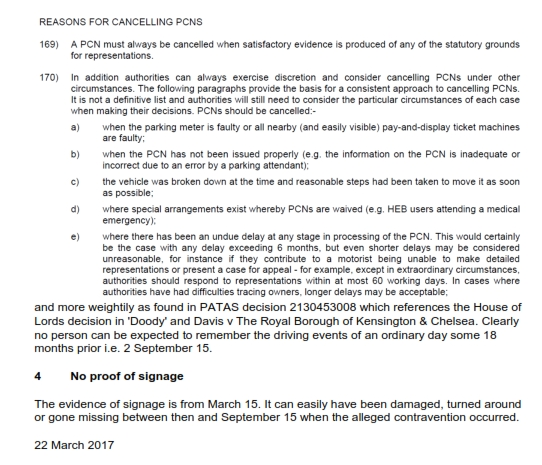 At this point many councils recognise they are in for a battle and gracefully withdraw, especially as failure looked inevitable on the PCN service point alone, but no, Ealing Council let the matter go to a hearing. Mr Mustard had 6 hearings that day and didn't expect that disposing of Ealing would slow him down much. The Adjudicator was more than fair to Ealing, who had been given 7 days notice of the skeleton argument so had ample time to respond to it, and he asked them to clarify two points which was too much for Ealing. Finally after 18 months of almost relentless pursuit (a bit of a hiatus in the middle) they withdrew the Appeal which automatically means the cancellation of the PCN.

What a palaver, one which Mr Mustard is never defeated by, he simply reacts properly and in time to every piece of paper.

Ealing Council were bang out of order in continuing to escalate the case after the return of the postal PCN. Just looking at the file at that time would have revealed the address error and they could & should have sent a fresh PCN to the correct address or cancelled (a fresh PCN might have been out of time but that isn't the question today). The way they were headed the matter would have been with the bailiff before long and bailiffs don't listen to not had the PCN stories, they just take your car (generally speaking). Ealing Council are guilty, in Mr Mustard's view, of an abuse of process. What a pity there isn't a regular external audit scheme to check that they are not misusing their powers.

Councils have more power than they can be trusted with.