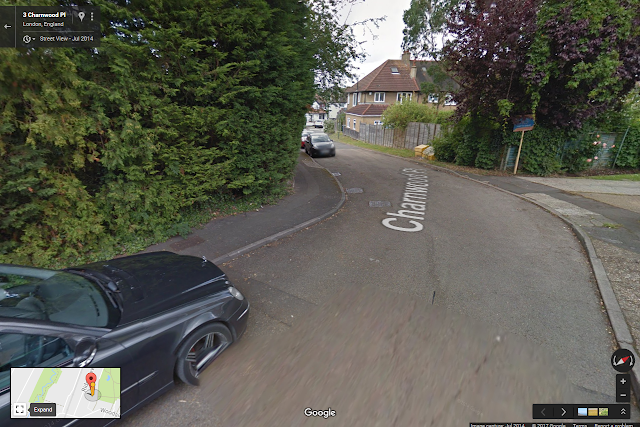 Mr Mustard was approached in his own road by a man with a PCN for parking adjacent to the dropped kerb just above the middle of the picture. Odd thought Mr Mustard as if you go straight across the road there isn't a corresponding kerb to make a crossover for pedestrians, there is no driveway there (in fact there is a fence) and there isn't a cycle lane so the three possible reasons for the issue of a dropped kerb PCN did not exist.

What also exercised Mr Mustard was that the traffic warden had stood to the right of the estate agent's board so as to get in the dropped kerb at that point and make the situation look as bad as possible. This is borderline fraud at worst and misrepresentation at best.

Nowadays you can look at lots of data about all Barnet Council PCN on this excellent link. Mr Mustard has to accept that in this respect Barnet Council are being open and transparent. Mr Mustard doesn't use the data very much due to shortage of free time but does look at the data now & then.

He thought he would see how often this little backwater had seen a PCN issued. The answer was 26 times.

Every single PCN had been issued for the dropped kerb.

Even more coincidental every single PCN had been issued by the same traffic warden despite them not having regular rounds so the road has been at the mercy of all 50 traffic wardens, none of the other 49 having seen fit to issue at this spot (well done the 49).

Mr Mustard thought this was a bit naughty and with his challenge to the PCN (his client was worried that the £110 would wipe out his earnings for the day but Mr Mustard assured him the PCN was fated for cancellation so he was not to pay the 50%) he also raised a complaint that no contravention had occurred and that the traffic warden was in a minority of one who thought this was a contravention and that there was no traffic management purpose (the whole point of the PCN regime after all).

It only took a day for a council officer (the traffic warden is externally employed by a contractor, NSL Ltd) to agree with Mr Mustard that the location 'does not meet the criteria necessary to be enforced as a dropped footway restriction'.

They were also going to assess whether the traffic warden needed further training. Mr Mustard doesn't think so, he knew the rules exactly hence the dodgy photo, but in the area of fairness & probity, the traffic warden concerned has had his day of reckoning and will not be wandering down Charnwood Place in the future, hazards Mr Mustard.

Sadly, probably half of the 26 other people wrongly given a PCN will have paid it and there is no mechanism, save the goodwill of the council (in short supply), to force the council to make refunds in this situation. A honest council would, but.......