In the space of 10 days Mr Mustard has been consulted about 4 parking tickets given to 3 residents who live within the Event Day CPZ and didn't apply for an Event Day permit because they already had a Resident Permit.

In his operational guidance the Secretary of State wrote "motorists cannot reasonably be expected to read, understand and remember the parking restrictions at the entrance to a Controlled Parking Zone that covers an area of more than a dozen streets."

So, how extensive is the Saracens CPZ? Here is a plan of it.


Map of Saracens Event Day CPZ by MisterMustard
From Stanhope Gardens in the NW of the zone, to Garrick Way in the south of it, is a distance of 2.5 miles. This is self evidently not an area of about a dozen streets but a blatant disregard of the guidance for a CPZ zone. Every vehicle owner within the red dotted boundary needs an ED permit (ED stands for Event Day). They are free as Saracens pay for them and for up to 88 visitor vouchers each year to cover the 16 match days + 2 other days. (You are allowed 4.8 visitors per day. Mr Mustard doesn't suppose there is any rule that stops you providing them as gifts to your rugby loving friends who want to go to a match).

Why is it that a number of residents, out of the 7,500 who are estimated to live within the zone, have not realised they need to have at least 1 and possibly 2 permits in their car. Mr Mustard doesn't know the full extent of the communications with affected residents but he does have the information sent out in November 12. Here is the envelope that the letter was in. 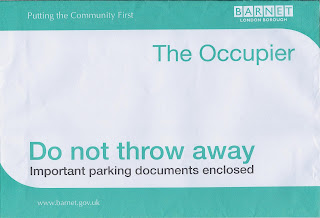 Mr Mustard can imagine how this landed in amongst pizza leaflets and other junk mail and got thrown away. It is 2013 and databases abound everywhere. Surely it wouldn't have been that hard a job to run a search of the existing CPZ permit holders and the council tax payers within the affected roads and then write personally addressed letters?

According to the Delegated Powers Report concerning this CPZ, there are about 7,500 residences within the zone (although a recent FOI said 9,000 and if you are wondering why Mr Mustard asked a question he knew the answer to the answer is he hadn't stumbled upon the 7,500 at the time he asked).

Here is the letter that was inside The Occupier envelope


Having read the whole two pages Mr Mustard concludes it is not the best bit of writing that Mr Richardson has ever issued (he is a helpful officer and probably pretty pressed so let us not be hard on him but instead be lenient on those who make an error) and he may not have actually written it. In an attempt to be thorough there is a lot of information but, like Craig Cooper's statement to the High Court on the NSCSO Judicial Review which the judge gave a kicking for being unhelpfully laid out, this letter suffers from a lack of headings and structure. The information would have been much better presented in a booklet with pages headed Why, Where, When, How to apply, Costs etc

What doesn't this letter say?

The zone is labelled the ED zone.

Even if you have a residents permit for, say, zone E, you need another one, issued free, for zone ED.

What it does say, and what has probably led many people astray is:

"Any person wishing to park on roads within the CPZ when an event is taking place will need to display either a residents permit or a visitor voucher in their vehicle."

which means that a resident with a zone E permit might not have read any further as they did have "a residents permit". This would be one of Mr Mustard's defences to a parking ticket.

How many people have already obtained an ED permit? Only 3,449 so possibly 4,000 people are at risk of a parking ticket.

If you know anyone inside this monster CPZ zone please ask them if they have a free ED permit so that they are not at risk of getting a PCN (if you are unlucky enough to get one please ask Mr Mustard for help. He is building up a lot of expertise in appealing). If they need a permit they can apply on-line here or telephone 020 8359 7446.

Don't be shy to ask for visitor vouchers either. 269,743 have been issued so far. They are free.

Maybe the council should now follow up by putting an explanatory leaflet on every car found in breach on an Event Day rather than a PCN?

Motto: Don't get caught; if you get caught - appeal!
Posted by Mr Mustard at 8:00 am