FOI all over the place & records destroyed rather early?

Back in September 12, before Barnet Council lost their rag somewhat with Mr Mustard and made question after question vexatious, he was helping a friend who had received a parking ticket in the snow (it has now been cancelled by the independent adjudicator) Mr Mustard started to muse upon the enforcement pattern during times of snow. The safety of traffic wardens ought to be put before the council's grubby revenue gathering. Thus, he sent in the above question.

Here is the answer he received. 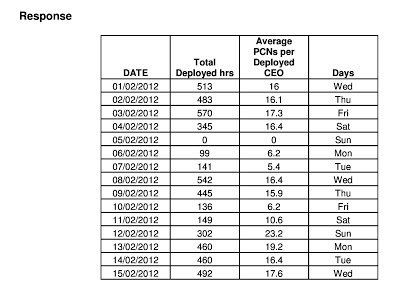 This answer was given in deployed hours rather than shifts which was probably because shift lengths varied and so that was sensible. However the average PCNs per deployed CEO was of no use at all as the number of deployed CEO (traffic wardens) was not stated. Mr Mustard asked for clarification in September 12.

Thank you for the reply which doesn't quite answer my question which was the number of PCN issued each day although is helpful as the CEO were not working similar length shifts by the looks of it so the number of hours worked is a better measure.

Could you please also supply the number of PCN issued each day as originally requested.

In January 13 he wrote the following:

I note that an answer to this email remains outstanding. Please now provide an answer as soon as possible.

The council's response was:

Thank you for your request for a review of the civil enforcement officer shifts received on 14 January 2013. I’m sorry to hear that you are unhappy with the council’s response to your information request.

We will now conduct an internal review.


Did Mr Mustard ask for an internal review? not really. He simply pointed out the failure to answer the original question. A response to the question would have sufficed.

We are unable to provide this information regarding the number of shifts worked by Civil Enforcement Officers during the period specified as those records were not retained following the transfer the Parking Service on 01/05/2012.


Why not? If there was any query about hours paid then it could not be answered. It is normal to keep payroll backup records for at least a year and preferably 3 (certain records have to be kept longer in case of government inspection). Mr Mustard thought that the records would have been kept in the SAP system and there was no good business reason to destroy them. Doubtless this was a breach of the council data protection policy.

The second part of the answer was: 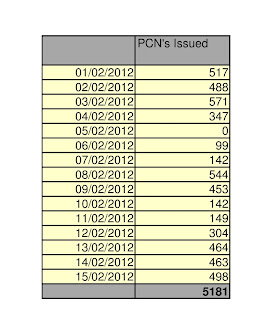 Mr Mustard looked at the numbers supplied and thought it odd that the number of PCNs issued was remarkably similar to the number of deployed hours and in some cases identical. He didn't believe for one moment that traffic wardens only issue 1 parking ticket per hour so he guessed that Barnet Council had, once again, erred. The answer should have failed the sniff test, it was self evidently and glaringly wrong. Mr Mustard asked for the review to be reviewed. The council responded in due course.

Thank you for your email, and my apologies for the delay in replying.

I have asked the service area to double check the figures they provided and their answer is as follows:


I can confirm that the PCN numbers cited in the email below is correct. This was obtained from a report from the Civica system. There was an error in the previous email where the PCN numbers were incorrectly calculated as being deployed hours. We are unable to provide actual figures pertaining to deployed hours as these are no longer available to us as a result of the transfer of the service.


I trust that this resolves this issue.


The "issue" isn't really resolved. Mr Mustard still has no idea what happens about parking enforcement when it snows. Next time it snows he will get his questions in before it thaws.

Barnet Council wonder why they are on the naughty step at the Information Commissioner. Given the speed and quality of their answers, one can't be surprised.

Mr Mustard
Posted by Mr Mustard at 9:46 am